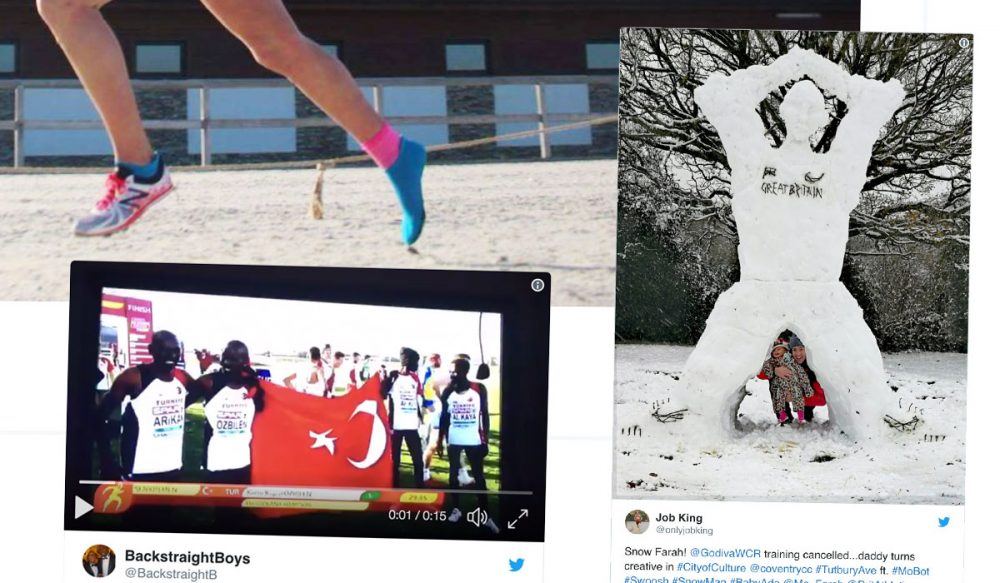 Here are a few good, bad and humorous posts that stood out this week.

1. National pride – A team gold for Turkey at the European Cross Country Champs and fortunately the only member of the team born in Turkey arrived just in time to turn the flag the right way up.

HA!!! Did you see the actual Turk showing the Kenyans which way round the flag went??? 😂 #EuroXC pic.twitter.com/Dq51Hr01iW

2. Cinderella Partridge – Lily Partridge loses one of her spikes halfway through the Euro Cross Country Championships on Sunday – and still powers on to a 15th place finish. Respect.

3. Can’t please everyone – Andy Vernon was unhappy with his XC team omission, but Andy Butchart is having none of it, telling his fellow Brit to “try getting one of the guaranteed places next time”. Vernon was returning from injury at the Euro Trails and has been a solid performer on the XC for GB in the past.

I would say @BritAthletics would have done quite well to take a punt on a 4 time medalist who has an average finishing position of 7th over 10 races in the European XC champs.

Emmm… no!! why not next time get the guaranteed spot. #JustSaying

4. Ideal marathon training – American 1:42 800m runner Nick Symonds ran his first marathon in Honolulu this weekend and his training was… less than ideal. Off of an average of 25-mile weeks, Symonds ran 3:00:35. Where was your sprint finish for that last 800?

Not ideal Marathon training but it will have to do. Less than 24 hours till race time!! #HonoluluMarathon #Honolulu2017 #RunAloha @HNLmarathon pic.twitter.com/AGoGCiO1yR

6. On the subject of snow – Social media was awash with snaps of snowmen this weekend,  and Job King’s ‘Snow Farah’ is the clear winner.

7. Hat’s off – In her collegiate debut in the 300m US star Sydney McLaughlin runs 36.12 to shatter Candace Hill’s world junior best of 36.56. McLaughlin’s time ranks No. 2 all-time in American history.

8. Not a sprint star in the making – Before setting US 6 hour and 100k records, as well as a World 12 hour record, at the Desert Solstice Track Invitational at the weekend, Camille Herron gave us a display of her sprinting… I don’t think the US 4 x 100m team will be calling.

In my mind I’m a long sprinter! 😂 pic.twitter.com/gVFuUuu0Et

9. Good news – A good news story to finish from 4th December. Fell runners stopped in their race to rescue a pensioner who had fallen into a freezing waste deep bog. The walkers, in their 70’s, could have been in serious trouble if it were not for the runners.

Fell runners rescue elderly walker and take him to #Cleveland #MountainRescue Team volunteers who were helping to steward the race. A potentially serious incident averted. https://t.co/UJHLdmFla8