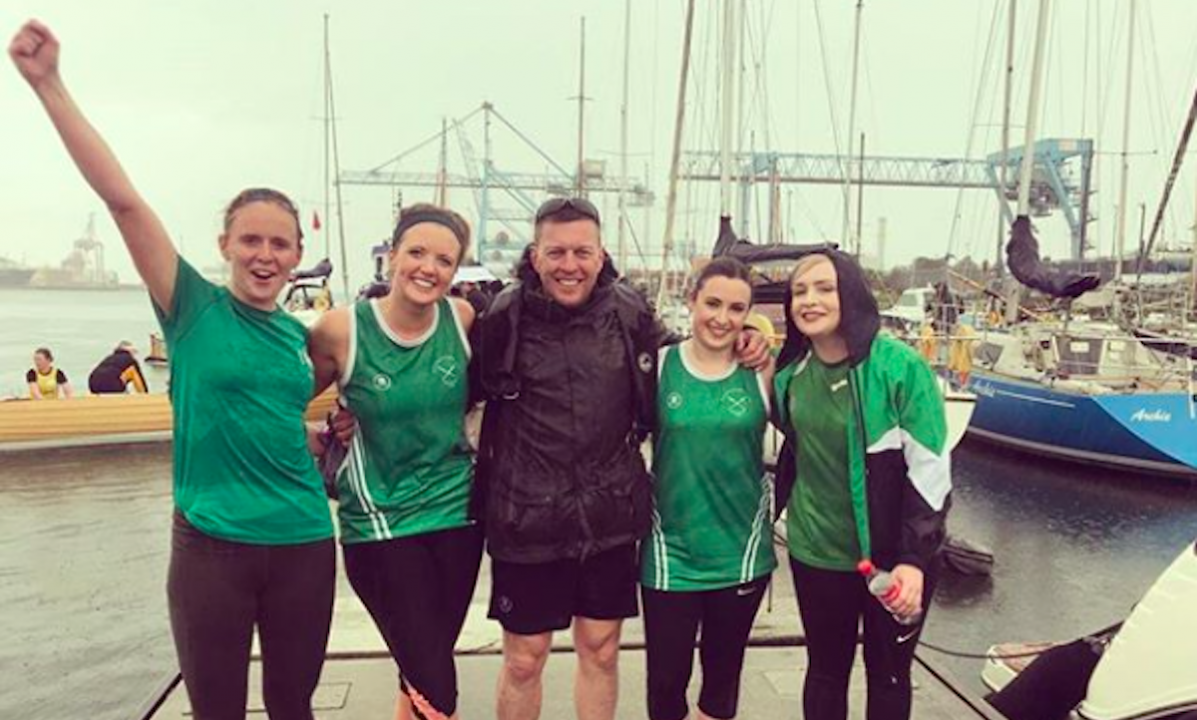 Just because it’s not running, doesn’t mean other sports can’t help us develop as athletes. Not just physiologically, Blaíthín Shiel thinks about all the benefits of her other competitive outlet.

Being stuck in what I now accept is an injury cycle, I am swamped with time to dedicate to the other competitive sport that I enjoy, rowing. While most of you will be familiar with Olympic rowing where they use long fibreglass boats, my torture method of choice is coastal rowing.

Running will always be my first love, but the silver lining in an injury is taking the opportunity to develop another part of yourself.

I have dabbled in a few sports and rowing is the only one that I can get a comparable runner’s high with and experience that full body exhaustion that feels so good.

Rowing sessions work a different system to running. During this time my endurance fitness is definitely being put on the back burner, because our training sessions on the water last 10-20 minutes at most. But they are quite intense.

My rowing club, St. Patricks’, like most others, offers indoor machine training and those sessions last more like 45 minutes. There are definite cardiovascular gains to be made there and I would recommend to anyone looking for a way to maintain their fitness while off the roads.

I suppose when I am dealing with niggles, I try to do some biking and cross trainer to keep the aerobics going, but I choose not to go all out like elite runners, or more committed club runners do. It took this to realise that I don’t actually run to exercise, it’s not just about ticking a box of physical activity.

I run to be outside and feel alive, to feel the air in my lungs and wind in my hair, especially when I leave it down. So while I cross train a bit to try minimise the damage on my return to running, I am happy to sacrifice some of my fitness in order to spend the time doing other pleasurable pursuits where I can experience similar emotions.

That said, I do firmly believe that the time I spend in the boat will help me as a runner both mentally and physically. Missing a few months of racing can cause a lack of stimulation or purpose in me. You can go through the motions of training and rehab but there is nothing like a race to make you really feel alive and pumped.

When we raced our regatta in difficult circumstances, (read below to find out the result), I realised that I had been missing the adrenalin of a competition. I walked off the pontoon with a smile so wide my face felt like it was about to crack.

Rowing is all legs and core, two things that runners need in abundance. The best rower will finish a race with fresh arms because they will have been leaning so far back on the stroke, pushing all their body weight and the weight of the water on the oar into the stretcher through their legs. The more you can push your legs into the stretcher, the more power you get on the stroke, and the more your glutes burn as you cruise down the river or along the coast.

The day after the race my legs were tight as screws and I had a sort of permanent ache in my abdomen and lower back – all after a mere 10 minute race effort. I felt like I cracked the technique this week which led to a better row from me, it is nice to feel improvement in sport even if it isn’t a shiny new personal best.

Building the core for running

As someone who is lacking in the general strength department which is potentially the root cause of some on-going glute and hip issues, every minute spent in the boat is another ounce of strength added to my body. It all adds up.

The benefits of coastal rowing might not have made it into the recent articles on cross training, but for communities in Dublin it is a realistic option. As mentioned above, it’s not purely physical.

And apart from the benefit of rowing for your running strength, this weekend we had a lesson, well, several, in overcoming adversity on race day. The same principles that I employ when racing track or cross country came in handy.

Everyone has a plan…

Races rarely go to plan, we usually have Plan A, B, C and “just finish at all costs”. In our training we prepare so we can adapt to whatever happens on the day. This weekend that message really hit home. Not on a track or trail, but on the water of the River Liffey, Dublin.

“All boats have five minutes to get to the start line” was the backdrop to a crew of four women and a cox hurrying themselves into the skiff at Poolbeg Yacht Club. After a long day of waiting around, due to an unpredictable timetable, we suddenly were about to miss our race. Sounds like a track meet doesn’t it.

And what had started and ended as a cracking sunny day, turned, for a brief thirty minute stint, into a heavy rainstorm with swells rustling up the previously dead calm water. We were drowned rats and my fingers were characteristically cadaver-like with the Reynauds’ syndrome before we started.

The running order had been messed with multiple times that day. We planned our food based on a 2pm or 3pm start having had breakfast at 10am. By 1pm it was clear the Dublin Port traffic disruptions were going to add a few hours to that, but the only thing that was certain that day was that everything was uncertain. Any athlete will know that getting your food intake and timing wrong on race day can ruin your chances.

Out of normal routines

The only food option was a burger, so I played safe not wanting to risk it coming up halfway between the yacht club and the East Link Toll Bridge. It’s hard to puke and run, and it’s hard to puke and row. I snacked on bits and bobs, never letting myself get too hungry or too full.

Anyway, there we were, jumping into a slippery wet boat, rain pouring like an open dam, the furthest thing from warmed up you can describe, blood sugars probably at the bottom of the Irish sea, but safely hanging onto our buoy in line and ready for the horn. It reminded me of the time I almost missed my 3,000m race for the National League last summer because the timetable had been delayed and then somehow caught up on. You know the starter won’t wait for you if you’re a no-show and the same applied here.

The tiller fell out.

Panic. This is akin to losing your eyes in a running race. We could make it up the river in a roughly straight line, but there was no way we would be able to straighten up after the turn without the help of the tiller. Imagine trying to blindly run a bend in the steeplechase, trying to navigate the water barrier and the inevitable mess of runners all around you trying to stay upright and straight.

Our cox jumped up, shouting “TILLER, TILLER”, waving frantically at the officials to delay the start.

Oh shit. No mercy. We had a split second to make a decision. If your shoelace wasn’t tied when the gun went off, would you run the race without the shoe or take five seconds to tie it and try catch up? We knew going in that we had a good chance of a medal if we rowed well. “Just bloody row girls, let’s go”.

We gave the other crews a nice head start as we frantically tried to get moving while also trying to stay calm and find a rhythm. Panic and rhythm don’t really go together. Without a rhythm the boat doesn’t move fast.  Without rhythm you run erratically and blow up. Rowing out of stroke is a boat going nowhere.

A lot of things were said in those critical first 3 minutes while our cox struggled to reattach the tiller on the moving boat, not to mention the fact we were rowing blind because he was looking backwards during his re-attachment efforts. It was a holy mess.

Somehow we managed to clip on the back of the group of skiffs in those first few minutes. We just had to keep contact with them while we got sorted. We still stood a chance. “Everyone just stay calm and row long and strong”. Someone said something along these lines and we just kept repeating it to ourselves. Stay calm, run smooth, regulate your breathing, maintain contact, and settle in.

As we caught up, the next curveball arrived. I had never rowed in the rain before and had not anticipated that the oar would be slippy. It’s like turning up to run an 1500m in flats because “you’re saving your calves”, but it’s so wet that you can’t run without slipping.

Coupled with the total lack of feeling in my white fingers after waiting on the pontoon before, I was in real danger of actually letting it slip out of my grip and into the Liffey. Hanging on was the only thing I focused on for the entire 1,800 metre disaster.

We reached the turning point a nose ahead of the others, and pulled off the quickest turn we have ever executed as a crew. Adrenalin is amazing. We barrelled it back down towards Dublin Bay, every stroke accompanied with the loudest involuntary sound effects reflecting the full-body effort involved.

And somehow, suddenly, we weren’t just a nose in front, but a full boat length ahead. By rowing standards, this is a significant gap. Not enough to be absolutely certain of a win, but enough to feel confident if we could just hold it together and not die. A couple of seconds in running terms. Enough to make us realise that despite it all, we had more than just a fighting chance.

We found another gear. Coming in past the pontoon, our loyal club members relentlessly cheered “C’mon the paddies” until we were safely across the line in first. We dug deep, it was a new level of hurt and very close to that which I have experienced in many a running race.

I don’t ever get to experience winning, it’s a rare thing in individual sport. But when that horn sounded and the girls all collapsed onto their oars, I somehow had the energy to jump up and fist pump in the middle of the River Liffey and celebrate a success in the face of adversity.

The lesson is that when shit hits the fan, stay calm and go with it because adversity is the truest test of an athlete.

[Editor – Remember if it’s on Strava then it all counts.]

How to fuel your training and racing to reach your potential
Have you got the fight?