The strange and wonderful world of race prizes 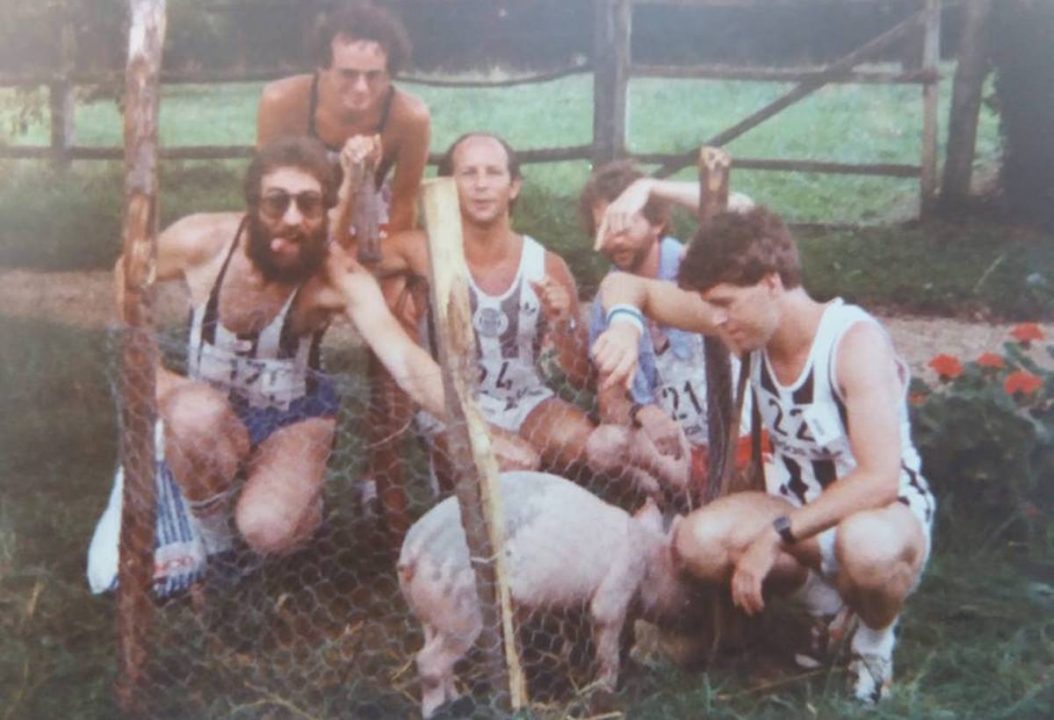 Photo: Greg Davis (3rd from left excluding the pig) with his team's prize in France

Live turkeys, pigs and oysters, cigarette lighters, beige cord suits and blowtorches – this isn’t a mad version of Generation Game, but just some of the oddest race prizes won by runners over the years.

A seemingly innocent-sounding question was posted on the popular Facebook group I Was Or Am A Runner this week. 14:51 5000m athlete Chris Bolt asked ‘What strange prizes have people won?’

Bolt’s post has received over 150 replies so far. The Bracknell AC runner has been inundated with hilarious race prize stories from winners all around the world.

He was prompted to ask the question after hearing his friend and sub-4 minute miler Matt Barnes from Sale Harriers Manchester had just won a toothbrush and toothpaste for a veteran’s prize.

Bolt added his own bizarre race prize story to the discussion. The runner revealed he’d once won a power drill in a French road relay two decades ago. It made a fine Christmas gift for his Dad.

Wheels of cheese anyone?

The Fast Running team have certainly won their fair share of unusual prizes, with kettles, ashtrays, binoculars, knives, snap bracelets and loo rolls being just some of the long list reeled off the cuff.

One trip to Switzerland for Robbie Britton, Sarah Tunstall and Ben Riddell saw them return with nearly 15kg of cheese! Mountain runner Tunstall accounted for nine kilograms of the prize alone. Winning it that is, not eating.

Robbie recently collected not one, not two, but four pots of moisturiser as a prize for a 100km race in Poland. All of which were over the size he could take on the plane. There was also a handy GPS watch in the victory bag too.

While many of the winners’ ‘trophies’ may not have always been appreciated – such as hairdryers for the follicly challenged, butchers’ vouchers for vegans and a can of Castrol GTX oil for a runner without a car – they are surely better than nothing at all?

Possibly the best picture was from Greg Davis of Shaftesbury Harriers. At a race in France in the 1970s the team won a live pig as first prize. Alas they were not able to get it back through customs.

Davis added: “The race was held in a village called La Bazoche Gouet in Northern France. We had to leave the pig there. No idea of it’s fate but I suspect le cochon est mort!”

Racing for the win or the prize?

Most runners race for the love of testing themselves against the best competition on the day. But prizes for the fastest athletes are surely something that will be expected when you’ve bust a gut after a hard week’s training?

Prizes are not the reason we race (well, sometimes they are), but they are a good incentive for the quickest seniors and veterans to push themselves. Sometimes they bring about times and positions that might not otherwise have occurred without the prospect of winning money, big trophies or live animals.

While I am by no means up there with the elite of the running world, I have won races – sometimes overall – but on a number of occasions have been surprised to find there were no prizes at all in return for my not insignificant efforts.

The glory was enough on most of these (rare) times where my victory has left me empty handed, but sometimes the exhaustion then exhilaration of winning a race would have most certainly been topped off by a prize of some variety – even if it is a Peppa Pig lunchbox with screws inside like one lucky member of IWOAAR won one year!

Prize money in the UK

This topic has also been raised on another Facebook page, this time GB Distance Runners, headed up by Tonbridge AC coach and UK Endurance Conference joint-organiser Mark Hookway.

Hookway believes that ‘it’s not all about the money’ but feels that ‘if athletes are winning races from a few thousand participants then most would expect the winner to be rewarded reasonably’.

The presenter of the Trackside Podcast (a podcast discussing the world of elite and grass roots athletics, a position he shares with Alex Hookway, Pete Brenchley and Lewis Church) was becoming frustrated with the lack of clear prize information on race organisers’ websites.

In an attempt to tackle the issue, Hookway points out that ‘most sporting events highlight clearly what is on offer for winning, but our sport sometimes seems shy in doing this’.

He has asked for help in compiling a list of races that publish the prize list on their website. The coach believes this might ‘encourage the top GB distance runners’ to compete at these events.

While big money prizes and course record bonuses will only ever apply to the top 0.1% of the running population, they serve a great purpose of attracting that top percentage of athletes to compete against each other in one event. That’s something that can only be seen as a good thing for domestic endurance running standards.

The race for the oddest race prize

For the vast majority of club and unattached athletes, the pot hunting continues for the best race prize on offer each week. Be that a brown envelope stuffed with fivers, a knitted Irish jumper, a rocking chair or even a trout.

To read the full discussion head over to the IWOAAR thread here (you have to be a member of the group), or let us know what your most bizarre race prize has been – can you outdo a washing machine, a whole gammon ham or a carpet though?

7 alternatives to the London Marathon
What makes the Leeds Abbey Dash a ‘must do’ race?