The Round Norfolk Relay: the ultimate club experience 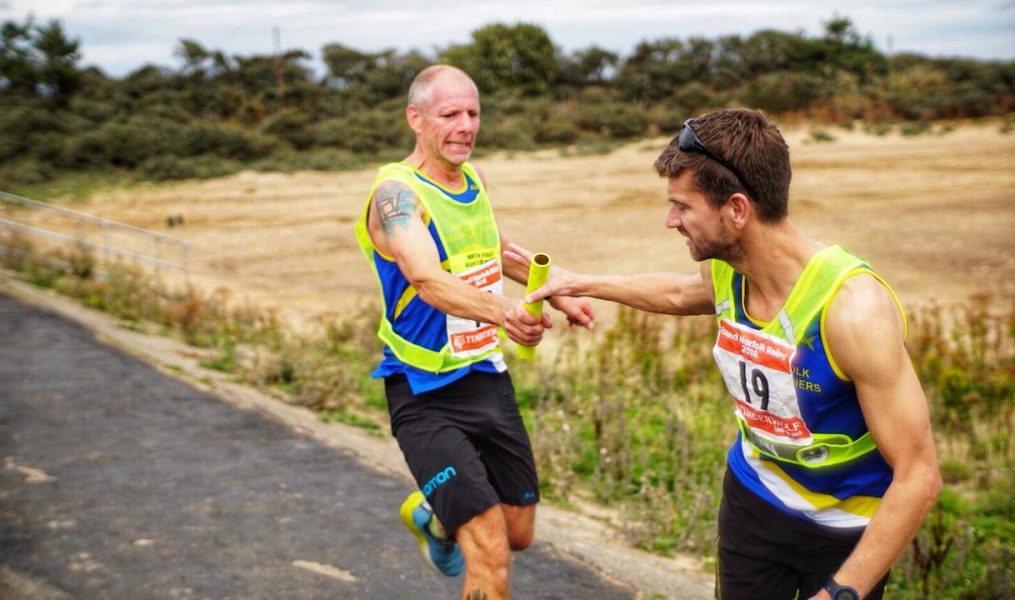 The 194 mile relay race around the county of Norfolk has been labelled ‘the ultimate club experience’.

The 32nd staging of the Timberwolf Round Norfolk Relay (RNR) took place last weekend (September 15-16) and once again this excellent event delivered.

This year saw 60 teams of 17 runners on the start line ready to take on the 194-mile challenge. Beforehand each team must provide a time estimate so handicapped starts can be assigned, with the goal of everyone arriving back in King’s Lynn around 9am on Sunday morning.

The North Norfolk Beach Runners have entered the ‘club class’. There must be five veterans and five females within the 17 runners.

All the stages are unequal so range from 5.49 miles all the way to 19.67 miles. Some are on road the whole way, whilst others include trail, coastal path and even shingle beaches.

Every team starts and finishes in King’s Lynn and this year the Beach Runners started at 11:00pm with runners from Wymondham and Ryston. It’s an understated set of flags, some timekeepers (each team has their own) and a handful of runners. Such a huge undertaking, but so small at the start.

With my own leg being number 12, scheduled to start at 1:45am, first it was time to support. When a runner is ever on a road they must have a cyclist with them for safety. No roads are closed for this event, but a lot of the early stages go on and off-road periodically.

The handovers are managed by different clubs, with volunteers often running before or after their duties to support the event. It really is an event for the whole club, with runners, cyclists, checkpoint staff, drivers and just everyone out to support theirs and other club’s runners.

As the end of your stage approaches everyone puts in an extra effort. Your club mate standing there, waiting for the passing of the baton, and your teammates all cheering you in. The faces of exhaustion at the end of each leg are a sight to behold. With all the excitement plenty of runners go off like a rocket. One would be hard pressed to guess the length of a leg from the starting speed as everyone sets off as if running a 5km race.

As the day continues teams go back and forth with the clubs they start with. Some fudge their predictions to get better starting spots and therefore pass more teams along the way.

Prizes are awarded for closest to and furthest away from predictions and the Beach Runners were 16:35 away from a correct prediction (although that might have been my fault for going a bit quicker than planned). Yes, that’s a humble brag right there.

Teams try to get to as many access points as possible to cheer on and fuel their runners. Cyclists jump on and off the team bus when the route goes into protected areas along the picturesque North Norfolk coast.

Running on shingle could be every runner’s worst nightmare but it’s par for the course in the RNR. A lot of the beaches are set up to dissipate the energy of the North Sea. This makes runners’ legs easy game for the shingle as each footstep loses power.

Charlotte Neale’s stage five win was a record by just under 10 seconds, but the effort required over the cliffs, beaches and trails was huge. Knowing that your club mates are all relying on you can bring the best out of runners, as well as great photos at the finish. From club youngsters, like 17 year-old Jacob Stares and 18 year-old Finlay Swanson, to veterans like recent UTMB finisher Colin Stark and sprint finisher Lynton Battrick, everyone gets involved. Usually V50 powerhouse Tony Witmond features for our club, yet unfortunately had sustained a yoga injury this year, but was still on the support team.

The relay is a chance for many to step up in distance with younger athletes taking on challenges for the club. Some even run faster than personal bests, just because they know their fellow club mates need them.

As the day ends each runner must have a support vehicle with them. The winding A-roads that circumnavigate Norfolk become a nightmare for everyone else so all the teams can protect their runners. The flashing lights in sight for miles ahead.

Craig Holgate of Ely Runners, a RNR veteran, ran stage 12 (after missing the start last year due to a flat tire) and helped his team to first in the open category and second overall. “There’s surely nothing better than chasing orange lights for 20 miles on RNR night” half joked the British international ultra runner.

The night brings long stages and NNBR had athletes like Adam Smart, Alex Money, Alex Curtis, myself and Darren Neale posting some hard night time miles. Yet the teams ahead are coming back to us now and those orange lights Colgate (and I) so love are coming thick and fast.

It really is a fantastic incentive. For the 19.7 miles I have the joy of nearly always seeing a flashing light ahead (and a lot of road kill). Some prehistoric hunting trait is awoken and each is chased with energy anew. For the final half hour, just one light is in the distance, never really seeing to get closer. It is only in the final few miles that the runner comes closer.

With just 400m to go, we’re side by side. A bit of encouragement spurs a sprint out of our fellow competitor and we both push up the hill to the finish. This is one of the joys of the RNR. With the baton safely passed onto Darren Neale, who has the unenviable task of trying to run faster than his wife Charlotte did on stage five, my running is done. Sunrise and the final push

Every year a mini story runs alongside the big race. Clubs can enter multiple teams, so NNBR has an A and a B squad. With the staggered starts it is always a handicap race to the finish. Every year I secretly cheer on the B squad as we hunt them down all night.

This year is closer than ever as Lynton Battrick only catches them on the final stretch to King’s Lynn. Some fantastic performances from the B team made it an exciting race within a race.

Other clubs have second teams made up of newcomers, verterans, female only and mixed runners. At a club level, everyone can get involved but the maximum time for the relay is 28 hours so a pace of 8:40 per mile is needed.

The teams are very much bunched together now and a parade of clubs are on the road. The daylight hours mean the support vehicles can once again be a pushbike.

The last leg into King’s Lynn is alongside the river Great Ouse and it is not easy going. Long grass and plenty of gates mean it is lovely running, but a huge effort on the supporting push bike. I was relieved to hear Steve Brown would be taking on the mighty stage 17 on his Brompton. The lack of suspension left Steve a little sore, but he did a fine job.

Back to where it all began. The sports centre in King’s Lynn has a final track finish,  so crowds gather to cheer the final runners in and inevitably sprint finishes are encouraged.

It is a good year for North Norfolk Beach Runners A Team. We finished third overall, second in the club class and second Norfolk team. The mighty City of Norwich AC take the highest honours. Many Norfolk clubs feed athletes into the larger Norwich based club over the years so they are regular winners.

It becomes a running joke when the same chap steps up to collect all the stage winner trophies for CONAC as many had long journeys back home across the UK after the relay [although some have missed the irony of this comment being made by a runner travelling from France, I will add that CONAC only had two 2nd claim runners this year, both with strong connections to the club].

And then it is over again for another year. The RNR, the ultimate club experience, disappears. The fight to make it onto the team for next year begins.