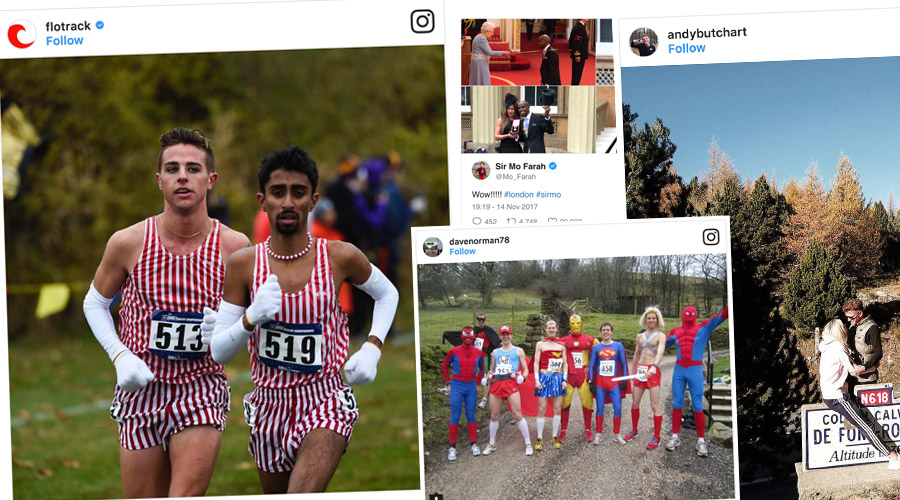 Here are a few good, bad and humorous posts that recently stood out.

1 year ago, Colin McCourt, a former pro runner for England, entered a bet

But somehow he did it

2. No words needed – North Central College’s uniforms at the NCAA Cross Country Championships on Saturday. But before you shake your head the Cardinals did go on to win an 18th NCAA Division III title.

Those North Central uniforms are 💯 #D3XC

3. Love is in the air – Andy Butchart and Lynsey Sharp make a lovely couple, and its great to see them share a moment at altitude in Font Romeu. Aww. ❤️ 😍

4. Gary O’Hanlon on Instagram  – following a mass uploading of photos in a few days, the highlight from O’Hanlon who didn’t…and then did win the Irish national marathon title last month, dives into the sea for a recovery dip after a tempo run. Maybe that’s the secret to two marathon PBs in your mid-40s.

5. Vlogging – Eilish McColgan is taking over the vlogging world… we hear the BAFTA Rising Star Award is as good as hers.

Found Myself A New Training Partner | Ep8 https://t.co/mqSpSbAq9g via @YouTube

6. Shalane Flanagan keeps inspiring – but she must be running out of motivational quotes because this was a lazy attempt “If you want something……go chase after it.” But hey, she did win the NYC marathon – that’s good enough.

If you want something……go chase after it. #sundaymotivation

7. What else would you do on a stag do? Dave Norman and company about to start a 14-mile hilly road race dressed up as superheroes.

About to start a 14.3 mile hilly road race on day 2 of a Stag Do. As you do. #dentdalerun #stagdo #nostalgia #superheroes

10. Grit – This was last weekend but still worthy of a mention. After her kit stolen pre race in Spain, Fionnuala McCormack makes do in trainers, leggings and sleeves rolled up to finish fifth. Respect. 👊