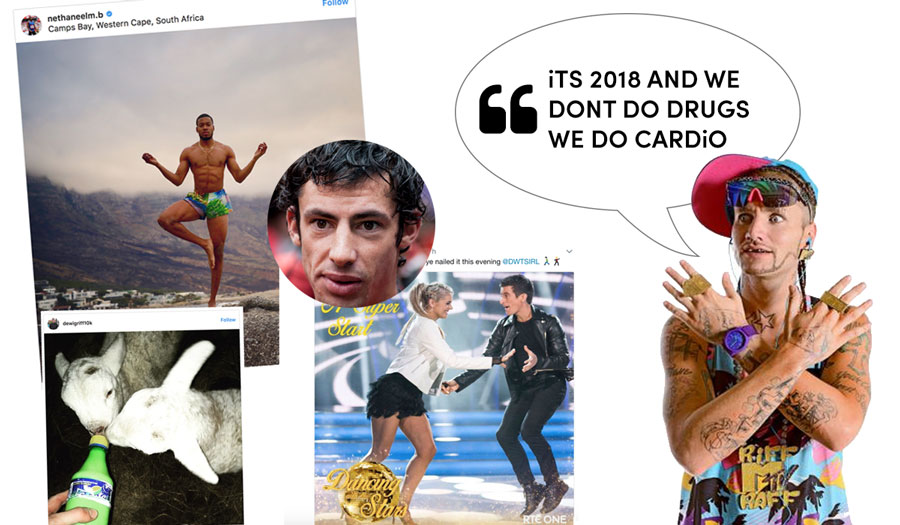 Some athletes put forward a solid case for not using social media and focusing on their running, but where would be the fun in that?

To start with its some breaking news… Nethaneel Mitchell-Blake has become disillusioned with track life, given away all his possessions (including the world gold medal) and will now dedicate his life to become a master yogi.

In love with South Africa 🇿🇦. Such a beautiful country. As you can see I’m meditating as I charge up to take part in @adidasrunning summer shoot. Lekker mi China !!!! #campsbay #SA #meditating #lekker #sharpsharp #zen #yingyang

Other athletes are also looking beyond athletics

The day has finally arrived it’s the return of #dancingonice tune in tonight for TX1 at 6pm on ITV. If you haven’t managed to see the ads. Look no further here’s mine: pic.twitter.com/MakhdQs6T0

And before you could count to three, the trend had reached Ireland with race walker Rob Heffernan also off to pastures new.

What an opening dance for series 2 of #DWTSIrl! That jive, we're exhausted just watching you @RM_Heffernan! pic.twitter.com/gm1tlQynCZ

And the quote of the week goes to…

US rapper RiFF RAFF (hadn’t heard of him either) told his 1.1 million Twitter fans that “iTS 2018 AND WE DONT DO DRUGS WE DO CARDiO” and set a one mile challenge for the next morning.

The war on drugs in sports has a new ally it seems. Cheers RiFF RAFF. Fast Running doesn’t endorse the music though – it’s awful.

BiG DAY TOMORROW YALL iN THE MORNiNG WE ARE ALL RUNNiNG A MiLE ON AN EMPTY STOMACH TO BURN FATTY McFATTERSONS OFF iT DOESNT MATTER WHAT THE WEATHER iS RAiN SLEET OR VOLCANO HEAT. iT WAKES U THE FUCK UP. iT ALSO REMiNDS YOU THAT iTS 2018 AND WE DONT DO DRUGS WE DO CARDiO.

Lambing season approaches and we’re not sure Dewi Griffiths is going to be allowed to help out this year, after getting this pair all excited on Sprite.

Maybe Dewi can team up with GB mountain runner Ricky Lightfoot and together they can save the endangered lambs of the British Isles on long runs?

Went for a run, found this little guy who needed a hand… #fellrunning #lovethelakes @SalomonRunning https://t.co/yprFeX3NHa

Jornet is ready for the roads

Fast Running’s article into the potential/hypothetical marathon speed of mountain man Kilian Jornet brought an answer from the man himself – although it was a touch slower than you would expected.

This was one of my best day running a 30km…so a great marathon for me could be a 15h ish… https://t.co/90XqhwWgQE#notmadeforflat 😉

Last, but not least, Champion US ultra runner Dave Mackey ran his first ultra since losing his leg in a freak mountain accident, finishing the Bandera 50k in just under 6 hours. Dave is a f*cking hero.

Bandera 50K in the books! 5:58, a respectable time in a mostly technical course. And it was actually fun. Jon ran his first ultra and killed it! With Jon Mackey and Billy @billyyangfilms