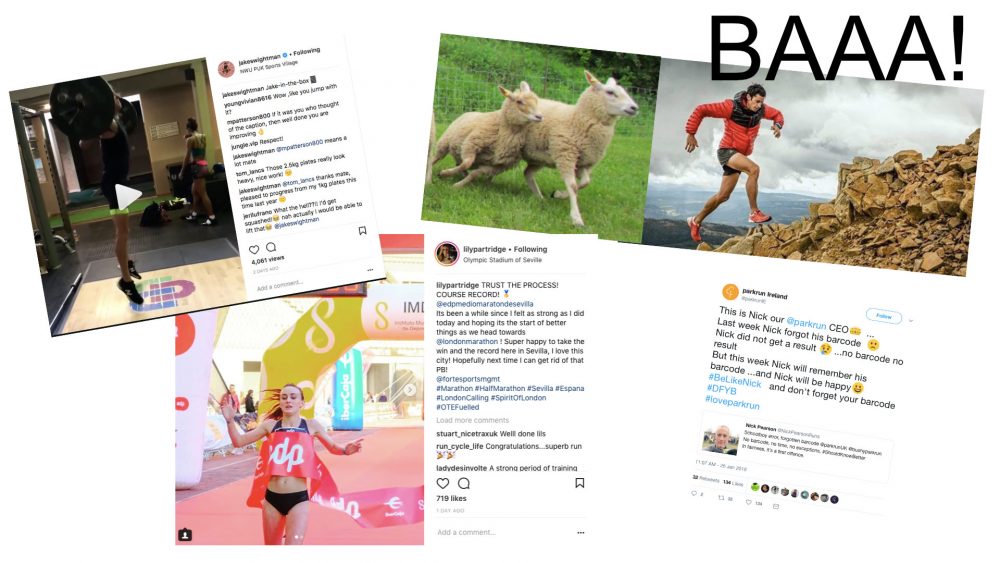 Another week has gone by and more and more elite runners have been allowed back on Twitter and Instagram. Here are some of our favourites from the last seven days.

Jake Wightman may have been showing off to someone in the gym with his jumping skills. What do you reckon about the timing?

She wasn’t too impressed…

That bloke Ieuan Griffiths is a great marathoner we hear…

Lily Partridge had a great start to 2018 on the roads, settting a course-record at the Seville half marathon. That finish line though…hopefully Lily escapes in time for the London Marathon.

TRUST THE PROCESS! COURSE RECORD! 🏅 @edpmediomaratondesevilla Its been a while since I felt as strong as I did today and hoping its the start of better things as we head towards @londonmarathon ! Super happy to take the win and the record here in Sevilla, I love this city! Hopefully next time I can get rid of that PB! @fortesportsmgmt #Marathon #HalfMarathon #Sevilla #Espana #LondonCalling #SpiritOfLondon #OTEFuelled

Irish marathoner Paul Pollock has been trying something new in training this week. 10 miles on Sunday, 20 miles on Monday, 30 miles on Tuesday, 40 miles…today?

Chapter: Minimalist to Be a Maximalist

“The key to being a minimalist is making a routine out of just about everything that is not core to your mission. When decisions are automatic, you skip the conscious deliberation and associated brain activity.”

When someone tries explaining a chapter from “Peak Performance: Elevate Your Game, Avoid Burnout, and Thrive with the New Science of Success” to you#ad #sponsored #sponsoredtweet #running
(Cc: @stevemagness)pic.twitter.com/p73cqh9due

Sir Roger Bannister may have been first but now 500 Americans have dipped under the four minutes mark – funny how the first and 500th clocked the exact (almost) time.

In a showdown, you’d like to give Don Bowden the benefit of the doubt as he was probably running in hobnail boots after a full day’s work.

At 34 years old New Zealand athlete is being treated with respect by the youth of America. How do you think Sir Mo Farah feels Nick? 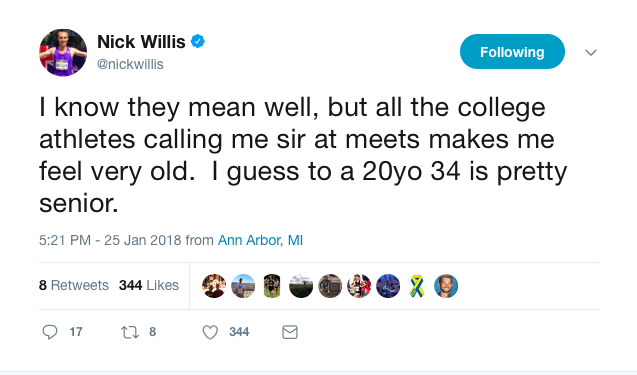 Don’t give up the day job

When you come back homr after a good training with sweaty hands 😅 pic.twitter.com/0y78QhwkqW

parkrun Ireland CEO Nick Pearson made a rookie error and forgot his barcode for the Saturday morning run, which led to this public shaming on Twitter. Never again eh Nick? Maybe we’ll see you next in our top 10 fastest parkrunners?

This is Nick our @parkrun CEO👑 …
Last week Nick forgot his barcode 🙁
Nick did not get a result 😢 …no barcode no result
But this week Nick will remember his barcode …and Nick will be happy😀#BeLikeNick and don't forget your barcode#DFYB#loveparkrun https://t.co/64TvyJz0HI

Fast kids, fighting sprinters and the loneliness of Paul Chelimo. Social Media Highlights
Which runners could medal at the Winter Olympics?