Ghosts of the London marathon 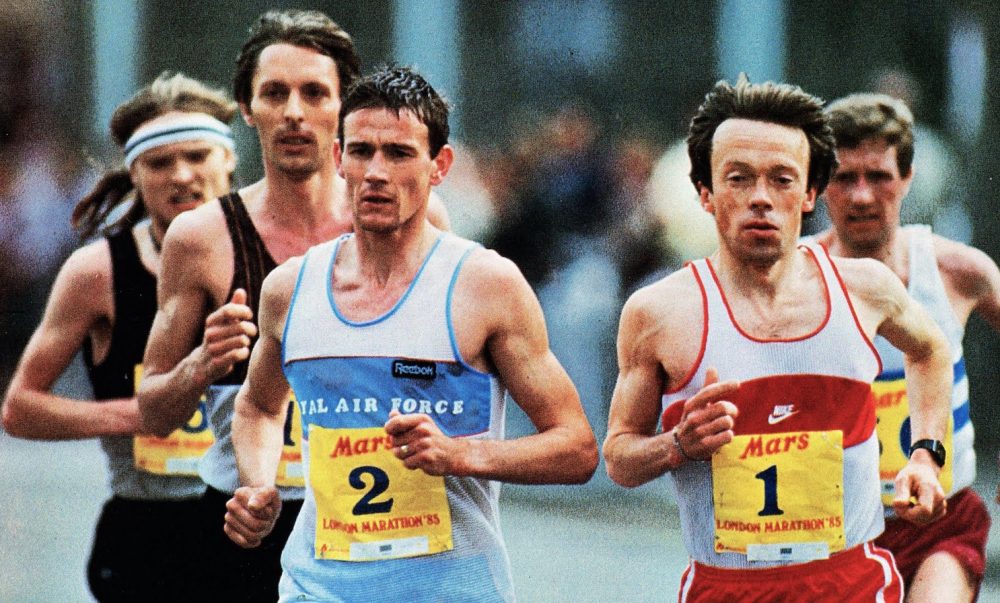 Self-confessed “athletics-anorak” Brian Aitken takes a look at the past British greats who have raced at the London Marathon.

It’s a tall order for the British males to really impress this year when compared to the past greats who have competed in the London Marathon before them.

Since 1982, only Mo Farah has broken into the UK top 10 marathon all-time list, but on Sunday he hopes to break Steve Jones’ long-standing British record of 2:07:13 that was set at the Chicago Marathon in October 1985.

Farah is arguably Britain’s greatest athlete of all time. Four Olympic and six world track championship gold medals around at 5,000m and 10,000m. Yet over 26.2 miles he is a novice and was unable to break Jones’ best in his 2014 full London debut where he ran 2:08:21. The Nike athlete only just eclipsed Charlie Spedding’s English best that day.

It is not only a testament to Jones’ great achievement, which has stood the test of time, but also to the plethora of British marathoners and specialist distance track and cross country runners he competed against in a truly golden era.

In 1984 Charlie Spedding had a vintage year winning the London marathon and collecting a bronze medal at the LA Olympics. Spedding finishing only two seconds behind former world cross country champion John Treacy. It had been twenty years since a Brit had won an Olympic medal over the marathon and none have been won since by a male or female.

In the same year, Steve Jones, who had enjoyed relative modest success on the track and country, had been aiming to break the Welsh record in the Chicago marathon, his debut at the distance. Instead, he blew the door off its hinges in the Windy City breaking the world record (2:08.05).

An epic duel in the London sun

The scene was set, Spedding vs. Jones. An epic duel in the sun. At the 1985 London marathon and the race did not disappoint.

Like Athenian warriors, Spedding and Jones fought it out toe to toe. Alone from 20 miles with the world watching. After a Jones pit stop in an underpass, Spedding created a sizeable gap, however, the Welshman bravely overhauled it, finally victorious in 2:08:16.

Spedding was rewarded with an English record, running 2:08:33 which was only narrowly surpassed by Farah 19 years later.

Almost unnoticed in the Battle of Britain, Scot Alistair Hutton finished third in 2:09:16. This is still the current Scottish record. Edinburgh AC’s Hutton went on to win London in dreich and foggy conditions in 1990.

The Scottish record has been attacked in vain in recent times by Andrew Lemoncello (2:13:40, London 2010) while Callum Hawkins has come closest running 2:10:17 in last year’s London Marathon.

Like Hutton, their strength was developed through winter training for the structured and constant East/West XC Leagues and the Scottish National cross. However, the pair remain third and 11th on the Scottish marathon all-time list – for now.

Elsewhere, John Graham ran 2:09:28 when winning the Rotterdam race way back in 1981. A time that put him third in the UK all-time list behind marathon legends Ron Hill and Ian Thompson.

Hill scorched to a 2:09:17 Edinburgh Commonwealth Games gold medal in 1970. Then Ian Thompson’s scintillating 2:09:12 four years later in Christchurch remains a Commonwealth Games record. It is also presently the seventh fastest time by a UK athlete.

The present British women have it tough as well. Maybe even tougher. The ghosts of the past are dominated by the triumvirate of  Joyce Smith, Liz McColgan and Paula Radcliffe. Between them, they have won the world’s greatest foot race on six occasions. Smith won the 1981 inaugural London marathon in 2:27:57 and followed it was an improved 2:27:43 victory a year later.

Yet the depth of UK women marathon running since has put Smith’s best performance only 29th on the UK all-time list. This must be a consequence, no doubt, of the McColgan and Radcliffe effect as both athletes were voted the BBC Sports Personality of the year in 1991 and 2002.

Farah, of course, followed their achievement in 2017.

In front of an adoring crowd, Liz McColgan (nee Lynch) leaned forward and hunched in her trademark running style. The Scot wore the opposition down, running from the front to take gold over 10,000m (31:41:42) at the 1986 Edinburgh Commonwealth Games. It was her first major title.

At the 1991 Tokyo World Championships 10,000m, McColgan once again dismantled a world-class field in a remorseless display of front-running stopping the clock at 31:14.31.

She went on to win silver over 10,000m (31:08.44) at the 1988 Seoul Olympics before taking the marathon by the horns. In doing so giving the distance a rare old shake and scare with her consistent, almost metronomic, world-beating performances.

Taking the marathon by the horns

There with a short blip when she clocked 2:31:14, finishing to her very high standards, a disappointing fifth. However, McColgan put this behind her by winning the race in 1995 with a 2:27:54 time.

Although, running quicker in 1997, she managed only second place. Her time, 2:26:52 was to remain her PB and puts her fifth on the UK all-time list.

Returning to London a year later, McColgan again finished second, two seconds down on the time she ran a year earlier. Last year, still competitive as ever, she completed the Stirling Marathon.

The wait for another British marathon heroine was short as Paula Radcliffe was coming through the ranks with haste. Like McColgan she was regimental in her planning, approach, training and execution.

An avid cross country runner, Radcliffe won the 1991 world junior cross country in Boston to herald her arrival on the world stage. She won the senior long course title splattered in mud with arms ecstatically aloft in Ostend in 2001. Her resilience and perseverance were finally being paid off as she had finished third and second twice before.

It was a long way away from her Bedfordshire School Wednesday afternoon cross country races. Here she roared up the grassless and muddy Heartbreak Hill on the Ampthill course. Relentless in the wind and rain with one man and his dog the only spectators.

On the back of these titles, it surprised some that it was also the year she won her first London marathon, fearlessly running 2:18.56, a British record.

In 2004, “Paula”, as well known commentators were informally referring to her, again won the race.  She smashed the world best in the process, 2:15.15 (mixed).  The following year, she then added a world marathon title to her CV with a 2:20.57 time in Helsinki.

Adding to the list of achievements, Radcliffe smashed the world marathon best (women only) on the streets of London in 2005.

Worth noting that they were ultimately quicker than McColgan over the often cruel, disrespectful and uncompromising distance.

On the back of the 1999 London Marathon finishers medal are the words “Success is a journey – not a destination”. So how will the current generation fare in their journey as they follow in the footsteps of the greats on Sunday.