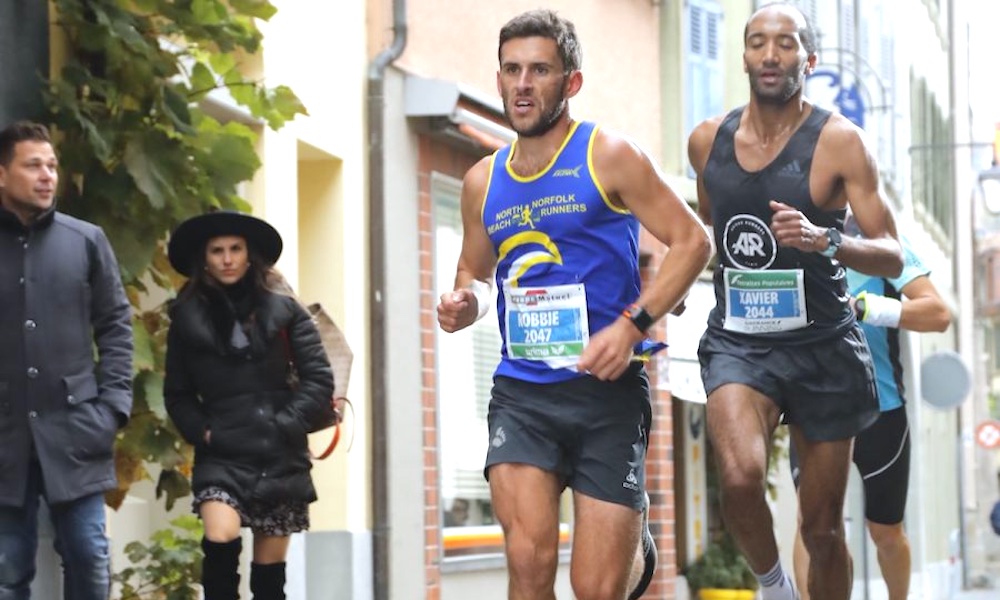 Two weeks can be a long time in marathon training. You can even go from doubting your goals to wondering if they’re challenging enough. The Chasing Sub 2:30 blog continues.

It was a mere two weeks ago that the question I asked was ‘should marathon pace feel this hard in training‘. The goal of hitting 5:40-43 minutes per mile for 26.2 consecutive miles seemed a world away and my last blog asked for the advice of those more experienced.

The response was excellent. Those who have been in the same situation or were currently experiencing it themselves were quick to get involved. It was encouraging to know I wasn’t the first or last athlete to find marathon pace difficult amongst the high mileage of the build up.

The likes of England marathoner Aaron Scott commented that he struggled to hit marathon pace until four weeks out and even then only 10k at a time. Then Aaron goes and smashes it out of the park with a 2:16 at Frankfurt marathon. Seeing the great British performances at Frankfurt was a real inspiration for my own training. It helps you believe.

I love to race. Preferably ultra distance, but it all scratches that itch. Last weekend was the Lausanne marathon and I raced over the half marathon distance. The goal was to get out and see how running faster for a prolonged period of time felt. Was the training sinking in?

Coach Tom Craggs spoke about being controlled, how I’d be running on tired legs and it was not the be all and end all of my marathon training, but I was confident of a new PB. My last half marathon had been 74:27 back in 2017. Two weeks ago I would have had 73-74 as a goal, but training had picked up.

All it took were a couple of key sessions to go my way. Confidence is a fickle thing and understanding that can help in the highs and lows of a marathon build up. The run that felt like it had started to ‘click’ wasn’t even that fast. It just felt fast.

A 35km point to point long run in the Swiss Valais seemed wise. It was flat (even ever so slightly downhill), there a cycle path the whole way and we were returning from Nats’ race in Italy. We had not counted on the headwind though. In my face for every single footstep of that long run and when the steady 15km effort started, it felt like the wind picked up. Yet my confidence grew from that challenge. It was free extra training in my mind.

Toeing the line at a half marathon I was confident. The nerves that normally crop up were there, but only quietly. Whilst I knew that a quicker half would be a good sign for Valencia, all I could do was try my best. If I tried my best on the day then the time would look after itself. Chasing numbers doesn’t help anyone.

Setting off, the plan was to not go any faster than 5:25 per mile. Not having a lot of half marathon experience (I think this is my third) there were some concerns I would start too fast. How hard should the start of a half marathon feel?

I was a little alarmed when the Kenyan and Moroccan runners didn’t instantly disappear off into the distance. We ran in a sizeable lead group for the first three or four kilometres, but this was down to the wind and the fact that those more experienced were just easing in. The fastest athletes knew what they had to do and a controlled start it was. Bang on 5:25 for the first mile was probably more down to the group’s pacing than my judgement.

When the lead group accelerated I had to decide whether to go with or hang in no man’s land. There was a chasing pack but as I eased off the concern came that they would just breeze past because I had started too fast.

What happened was a couple athletes bridging to me and then one in particular pacing in the most peculiar way. Every minute or so he seemed to surge. I sat in behind and every time I tried to take my turn in the wind, he would surge and see it as a challenge. Even suggesting we work together didn’t work. The hard work continued, but gradually the finish got closer. It never felt easy in the second half, but it also didn’t feel like I was working too hard any point. My mind was very much accepting of whatever time would appear, knowing I was pacing pretty well.

The final miles I usually kick up in a race, chase down whoever is ahead and generally bury myself. With the marathon training in mind the urge to kick was resisted. Even with another runner just ahead, the difference between seventh and eighth wasn’t worth the extra recovery time. It might be in Valencia.

I crossed the finish line in a new personal best 71:53 and it was a very pleasing result. Well over two minutes quicker than my old best and en route to sub 2:30 in my books. More training and tapering to be done, but confidence is high.

The more organised amongst you might notice this blog is a few days later than normal, but marathon training and writing blogs can all be affected by life.

Having recently written about ‘orchestrating the chaos of training’ it was appropriate that my own training became more complex. After a successful bit of steady running to pace on some intervals with my wife Nats and our friend Sophie, all seemed well, until Nats missed a chain between two posts and hit the ground hard. One x-ray and a broken pinky finger later surgery was planned for the next day.

This is where adaptability is key with marathon training and your coach. Moving Wednesday’s key session wasn’t the end of the world. Our training needs to fit around our lives and sometimes you just have to change plans.

Instead of doing 5 x 2km on Wednesday, it moved to Thursday and I appreciated that I was a little more tired because of everything going on. It took a little while longer than usual to get into my stride, but mental tiredness can affect your running too.

Then came missing the race planned for the weekend, which has been set for a marathon pace effort. But changing plans doesn’t have to mean that it’s less ideal. The opportunity came to do a tempo and long run session with a friend (and faster runner) Ben Riddell. All of a sudden a problem becomes an opportunity.

This is one of the things I have learned about marathon training, it doesn’t need to be perfect. Doing the best you can is great. If the day arrives and sub 2:30 is not to be, but I’ve given it my best shot, then I’ll be happy.

Hitting set paces, key sessions and times in races might be good for Strava and social media, but it needn’t define your marathon training. Do the best you can and be the best athlete you can be. That’s enough.

What makes the Leeds Abbey Dash a ‘must do’ race?
Chasing sub 2:30: The importance of teamwork