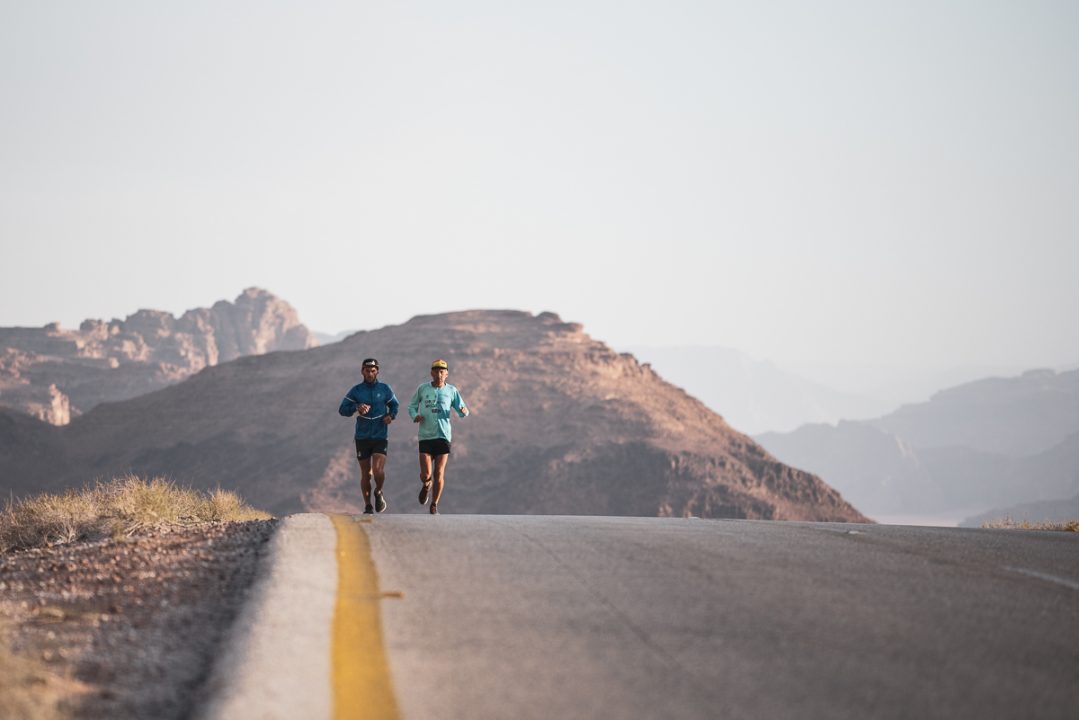 With an initial goal of breaking the previous record of 14 days, set by Alfie Pierce-Higgins and Mohamed al-Sweity in 2017, Lawson and Britton planned a nine day run, with a bit of wiggle room for the unknown. It turned out there was a lot of unknown.

The pair of insouciant ragamuffins took nine days, 10 hours and 17 minutes to cover over 400 miles of the middle eastern country’s national trail that runs from Um Qais in the north to Aqaba on the Red Sea. The route passes landmarks throughout, including the ancient city of Petra and Wadi Rum, as well as visiting some more remote parts of the nation.

“We wanted an adventure,” said Britton “and we certainly had one. The first 160km was marked and then it was all navigation. It made for a much tougher time, but took us to some really interesting places. Some intentional, others not so much.”

“An adventure without risk is no adventure at all so the slightly sketchy times en route, getting chased by dogs, caught out in the dark on a mountain side or losing the trail for the umpteenth time in a day made it a harder challenge but one we relished.”

The trail was opened in 2017 as a way to highlight some of the most beautiful regions of Jordan, linking castles in towns like Aljoun and Karak to the simply stunning Dana Biosphere. The section from Dana to Wadi Rum, via Petra, has been voted one of the top hikes in the world.

The two runners were supported by independent adventure filmmaker Dave MacFarlane and international sports photographer James Vincent. Britton’s wife Natalie White joined for the second half to aid the final push and look after the hound Petra that the runners unwittingly adopted for 200km of running.

The stray dog from the city of Petra, hence the name, made for an interesting story as it followed the runners for an initial 20km over rocky terrain. “Petra was different from all dogs we had been warned about, she was really well natured and a born ultra runner” smiled Britton. “After the initial joy of having a companion we felt a responsibility for her as we had brought her into a quite remote desert environment.”

“The first night she slept by our tents and then we snuck her into our bedouin tent the night after. We had planned to bring her back to Petra, where more tourists would keep her well fed, but upon reaching the beach at Aqaba she was joyfully playing with another dog and the family asked if they could keep her. It was quite emotional but felt like the right thing to do.” FKT along the way

After the initial ease into the first 160km of marked trails, which were apparently still quite difficult to follow, a GPS track was how the two progressed along the trail. “Dan and I can make good time when we know where we’re going, but at times it was very frustrating. With a newer trail and some of the more remote sections of the route there wasn’t the logical flow one might expect. Wadi after wadi was full of rocks, bushes and more rocks that slowed us down”

“We didn’t want it easy though, but it was hard to keep motivated on some of the longer days. For the first few day we chased the elusive 10km in an hour. We’d get three of four good kilometres and then either lose the trail or just come to really difficult sections through fields, boulders or the Jordanian equivalent of a rocky moorland.”

“It did come just at the right time though. We had a bit of an epic finish to day four. We left our support team up on a plateau before Wadi Mujiz and the navigation down the mountain side, with bundles of rock steps and sheer cliffs, took a lot longer than planned. It was some of the most difficult nav I had done down a mountainside and a mistake would have had serious consequences.”

“Coming up the other side to our finish for the day the light started disappearing and we only had one head torch between us. With some steep and difficult navigation on the other side too we really had to dig deep to make it up to our crew who we couldn’t contact. They were thankfully up at the top flashing their torches to help us keep in the right direction.”

“Then the next day it happened. Not one, but two 10km hours! We actually clocked along a lovely 32km in about three and a half hours. Our toughest day was followed by the most productive morning and that was a good sign of how the whole adventure was. We took joy from the good sections to fuel us for the tough times ahead.

The finish in sight

The final sections took the runners into wilderness and some of the world’s best known landscapes. “The ancient city of Petra has been on my bucket list for many years” said former archaeology student Britton “and both Petra and Wadi Rum were regions the whole team were exited about seeing. It really felt like we earned the experience of both travelling there on foot.”

“The desert around Wadi Rum was one of the final challenges and it was more troublesome for me than Dan. He’s like a lizard skirting across the sand and barely notices when the heat goes over 30 degrees. I’m caked in a layer of salt as soon as the sun comes up and it took some real attention to detail with my hydration and electrolytes to keep strong. You might call it Precision Hydration… can you print a plug as cheesy as that?”

“Getting to Aqaba we had one or two last mountain ridges to cross and a gnarly wadi descent from the final pass. There was always going to be a sting in the trail. Stretching the legs down a sandy river bed towards the sea felt amazing, but the finish brought more relief than elation. The hard work was done, the record had been broken and hopefully one day soon we’d not be leaving a hotel too early for breakfast.”

If you are interested in seeing more about the Jordan Trail then check out their wonderful website. There will be a film made of the adventure by Dave MacFarlane and keep your eyes peeled for more stunning pictures by James Vincent photography.

Robbie is sponsored by Odlo, Profeet Sports Lab and Precision Hydration. If you want to see the gnarly details then you can see it here on Strava or the highs and lows on Twitter and Instagram.