A running guide to the beautiful St. Moritz 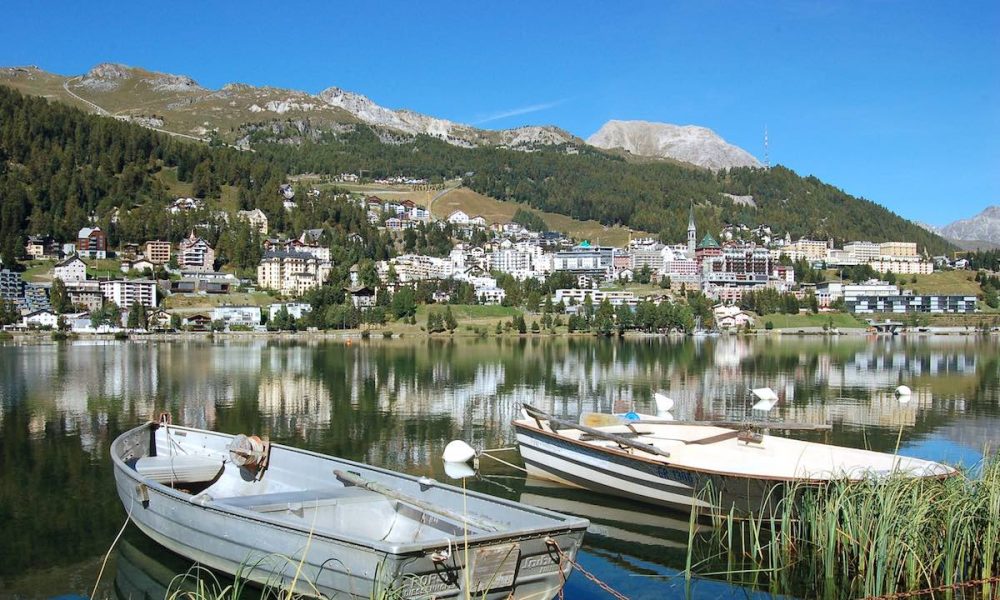 The Swiss resort town of St. Moritz is one of Europe’s best loved altitude training destinations, and for good reason.

With a huge variety of beautiful trails, a conveniently located track, a relaxed and friendly atmosphere, and views to die for, the lake-side town has it all.

It does have a reputation for being expensive, especially during peak seasons, but those disciplined enough to cater for themselves and willing to visit during the quieter months of June or September are rewarded with a reasonably affordable running holiday.

St. Moritz has an excellent variety of trails within easy reach of the town, from flat routes, to relatively flat, and undulating options available in most directions. And those who like more of a challenge have plenty of spectacular mountain routes to choose from.

A part-asphalt, part-gravel flat route, approximately 4 km long, circles Lej da San Murezzan, the lake which forms the focal point of the town. A number of other flat, undulating, and mountainous routes can all be accessed from here. The flat lake route itself is ideal for warm up and cool down runs for sessions on the nearby 4-lane synthetic track or weight training sessions in the gym which overlooks the lake.

Paths lead from the eastern edge of the main lake into the forest and on past Lej de Staz, a tranquil lake suitable for a post-training dip. From here you can take an undulating track towards Pontresina, some more technical single-track trails through the forested hills north of the lake, or a wider, mostly downhill trail, towards Celerina. The forest trails can also be accessed at the end of Via Surpunt, beyond the youth hostel (close to the track). From here you can also run south-west through the forest along the foot of the mountains towards Champfèr.

Lej da San Murezzan is just one of a series of lakes along the upper Engadin Valley. The banks of the other lakes, which lie roughly south-west of the town, also provide scenic mile after scenic mile of mostly flat trail.

There are trails on both northern and southern shores of Lej da Champfèr, the first in the series, making a circular route possible, but from Silvaplauna/Surlej, you’ll need to take the route to the east/south of Lej da Silvaplauna.

A small bit of road running is required through Sils im Engadin/Segl before the trails begin again along the southern shores of Lej da Segl. The distance from St. Moritz to the far side of Leg da Segl is more than 17 km, so even those who run far have lots of variety.

Downstream from St. Moritz the valley widens to offer an almost endless choice of trails in the Celerina/Samedan area. The area offers considerable variety and, apart from the final climb back to the town, miles and miles of perfectly flat ground. With mountains at either side of the valley, it’s difficult to get lost. The flat inline skating path around Samedan airport is popular for sessions. Behind the mountain: Val Roseg

When you think you’ve explored all that St. Moritz has to offer – circled the lakes up the valley; explored the valley around Celerina, Samedan and beyond; ran the forest trails to the east of the town; even tested out the mountain routes to the north and west – there are still surprises awaiting.

Via Val Roseg is an unsurfaced road which runs from Pontresina, behind the mountains, gently uphill for approximately 7km alongside the Roseg river, with steep mountains on both sides. As you run out from Pontresina, you’ll see the glacier covered Corvatsch peak ahead. This route is easy to miss, but it makes an interesting change from the other beautiful options in the town.

There are numerous options for those who prefer to run up and down steep mountains. Pick a peak – the ones with ski access are usually a good choice – find a trailhead, and run up! It really is as simple as that.

In the unlikely event that you do become bored of the trails in and around town, a short drive up or down the valley will lead to a whole new set of off-road trails and paths. Hiking and mountain biking maps which help give an overview of the local terrain and routes are available in most book, gift and grocery shops.

Night of 10,000m PBs is a running celebration at it’s best
7 ways to run faster at parkrun