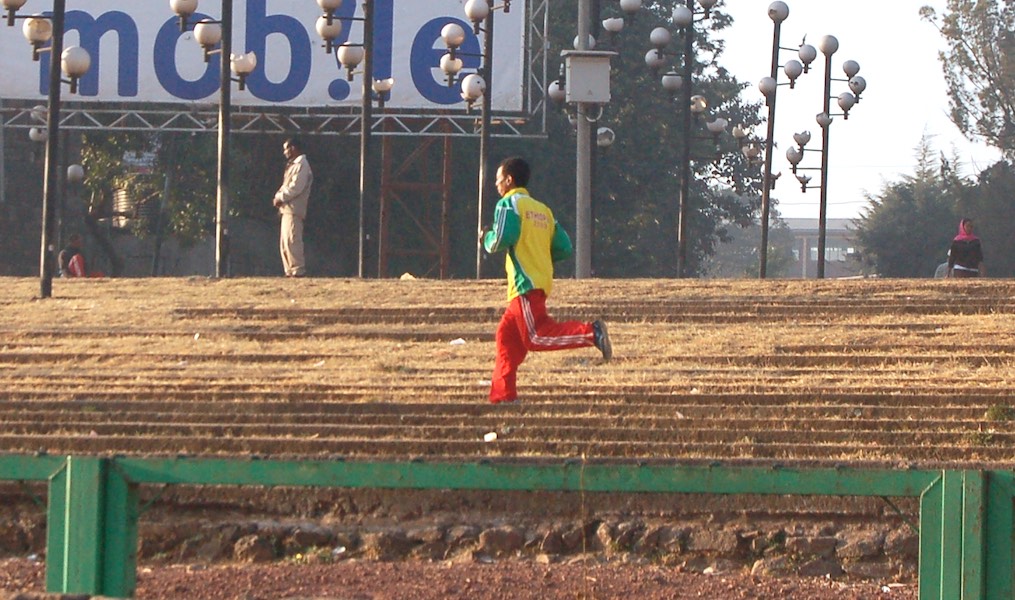 A trip to the Ethiopian capital is essential for those who want to experience the East African running culture.

The city of Addis Ababa is relatively safe by African standards, and the small town of Sululta, in the hills just north of the city, provides rural trails, excellent facilities and breath-taking altitude conditions for runners of all levels.

Friendly local athletes will happily show you the routes and famous running sites in the area. Taking part in the Great Ethiopian Run will make you fully appreciate the difficulties of racing at altitude, and is a common bucket-list item for recreational and high-performance runners alike.

While a trip to the Ethiopian capital makes an ideal running holiday for recreational athletes, it is also a great venue for serious athletes looking to carry out a block of altitude training. The cost of living is low and direct flights, from both London and Dublin, mean it’s more accessible than you might expect. Addis Ababa is built on a series of hills and the altitude varies between 2,200m and 2,650m depending on where you are in the city. In addition to some of the famed running sites in the area, the unfinished roads around this fast-growing city provide ideal off-road training for steady and tempo runs.

Roads which have been surfaced, but which are not yet in full use, are utilised for marathon sessions.

There are also numerous running options in the countryside just north of the city, where surfaced and dirt roads, forest trails and grass provide the full range of running surfaces.

The off-road routes tend to be unlevel and rocky. The Ethiopians often use these surfaces for their gentle recovery runs, and if you run with a group of locals you will notice that they use hand signals to indicate upcoming obstructions as they zig-zag over a relatively small area of ground in their infamous style.

The following are some of the must-visit training grounds: Meskel Square, also known as Abiot or Revolution Square hosted propaganda demonstrations during the reign of Derg leader Mengistu Haile Mariam and is of historical as well as sporting significance.

Today, hundreds of Ethiopians of all ages and abilities come here every morning to carry out a fitness routine, or to train to be the next international star in a very unique training environment.

Runners start on the bottom row of the tiered steps which surround the square, run to the end, and then run in the opposite direction across the next row, and so on until they have reached the top. Meskel Square is part of the Ethiopian running experience, though the pollution means that it isn’t the best environment for high-performance training.

Mount Entoto Natural Park is a popular place to run, and one of the few areas of Addis Ababa immune to the spread of the city. Eucalyptus trees cover this area known as the ‘lung of Addis Ababa’.

The high altitude—up to 3,200 m on Mount Entoto—makes this area considerably cooler than the surrounding city, but the additional altitude makes running even more difficult.

Just north of Entoto Natural Park the Sululta area provides an ideal environment for training. Most Ethiopian athletes train here at least twice per week, and even more so since Kenenisa Bekele built a synthetic track in the town. From dirt trails through the forests, to the large grass area known as satellite field, Sululta has everything to offer in terms of off-road running routes away from the pollution of the city. The town is situated at 2,750 m above sea level.

Located 11 km north of Addis Ababa near Sululta, Yaya Village is a popular training base for foreign visitors. The four-star resort which opened its doors in 2011 is situated at 2,700 m altitude and is co-owned by Haile Gebrselassie.

All-inclusive accommodation is available at the camp for 30 guests in twin rooms. Facilities at the camp include a 400 m dirt track and a large gymnasium.

Yaya’s location outside of the city means that the best trails through the eucalyptus forests and surrounding farmland are within easy reach of the compound. Running guides are available to pace runs and show you the best trails. Kenenisa Bekele’s synthetic track is located a short jog away.

The Great Ethiopian Run, a 10 km through the streets of central Addis Ababa, was set up in 2001 and quickly grew to be the biggest race in Africa.

In 2012, more than 35,000 runners took part, and the race usually attracts more than 500 participants from overseas. Everyone in the mass start is issued with a race tee shirt, which makes for a colourful scene, but race numbers or timing chips are not used unless you preregister and pay an additional fee.

The Great Ethiopian Run organisers also run other races in Addis and around Ethiopia. International half marathon and marathon events start from Haile Gebrselassie’s resort in Hawassa in the south of the country.

The National Museum of Ethiopia, which houses pieces of the skeleton of one of the oldest humanoids ever discovered; the Ethnological Museum is located in the former palace of Emperor Haile Selassie, where much of the former emperor’s living quarters remain untouched; the Mercato, one of the largest markets in Africa; and the Red Terror Martyrs’ Memorial Museum, just off Meskel Square, are all worth a visit.

Just 50 km south of the city, Debre Zeyit, has a pleasant climate and seven beautiful Rift Valley lakes, which are popular for water sports, bird watching and relaxing at the luxury resorts.

There are a number of beautiful and interesting sites elsewhere in Ethiopia, though many of them are more than a day trip from Addis.

Among the highlights are the astonishing rock-hewn churches in Lalibela, the ancient tombs in Axum, rare Ethiopian castles in Gonder, the ancient walled city of Harar and the unusual mountain peaks of Simien Mountains National Park.

Let’s not forget the spectacular waterfalls, hot springs and palm tree groves of Awash National Park, the Blue Nile Falls and the monasteries on the islands of Lake Tana. Tribal region safari tours through the Lower Omo Valley are also popular.

RELATED: A guide to running in Madrid

While most of Ethiopia’s athletes are not from the capital, hundreds of wannabe champions flock here from towns and villages in Oromia region and other rural areas, in the hope of achieving success like their great heroes.

Bekoji, of Town of Runners fame, is one such town, and the birthplace of numerous world-class athletes, including the Dibaba sisters, the Bekele brothers, and Derartu Tulu.

Every trip to Ethiopia should include an overnight visit to Bekoji where you can observe the next generation’s training sessions as well as taking a run in the local countryside yourself.

The Round Norfolk Relay: the ultimate club experience
Chasing sub 2:30: Getting comfortable with uncomfortable