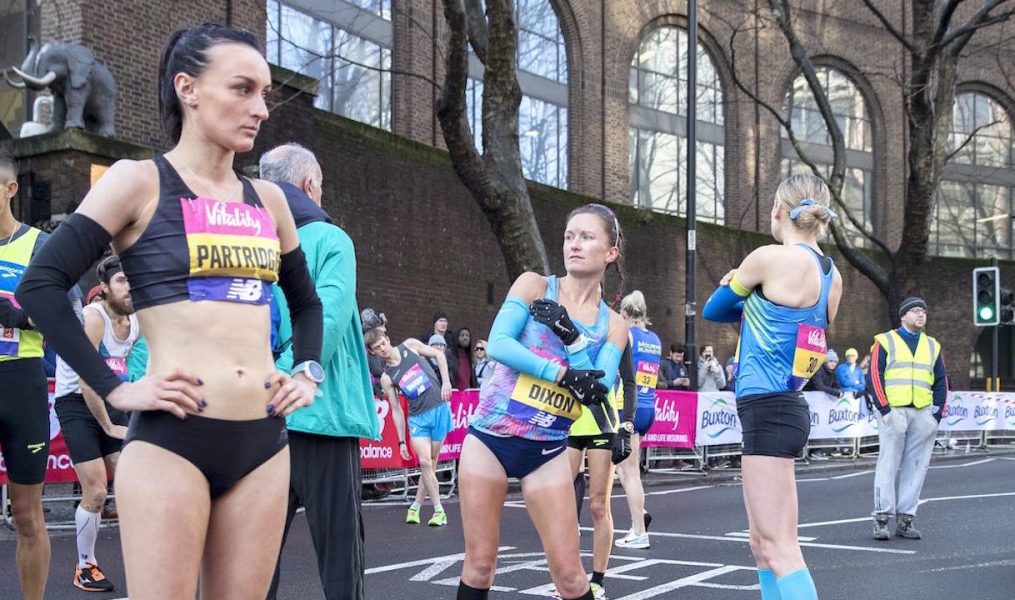 The question is raised once again by a prominent Olympic athlete turned coach, reigniting the debate, and is discussed here by fellow British coaches and athletes.

Mo Farah’s exceptional fifth win at this year’s Great North Run overshadowed what some have suggested disappointing results for the GB elite women.

While the iconic half marathon did witness breakthrough performances by Northern Ireland’s Emma Mitchell, who ran a debut 74:38, and Rotherham’s Hayley Carruthers, who ran a near five minute 74:46 PB, the ‘established elite’ were well beaten by the up and coming pair.

The below par runs by Aldershot, Farnham and District’s Lily Partridge (who ran 75:15) and Charlotte Purdue (76:50), together with a post-injury comeback run for Sunderland Strollers’ Aly Dixon (75:42), did not go unnoticed by Olympic distance running legend, Liz McColgan. Although the trio do not receive financial support from British Athletics, they are given the opportunity to attend warm weather and altitude training camps.

Carruthers is also unfunded, but only burst onto the elite racing circuit this year, posting PBs of 16:46, 34:05 and 2:47:47 in a prolific four-month period. She looks set to revise her marathon best when she represents England for the first time at the Toronto marathon in October.

In a series of Twitter posts, McColgan questioned the current state of British distance running, asking her thousands of followers ‘what is happening to our endurance programme?’ in the wake of the elite women’s results in Gateshead.

The former world half marathon champion, Olympic silver medallist and world championships gold medallist was inundated with replies, stoking the fire of the seemingly endless debate about British endurance running.

Fast Running approached McColgan for an official comment. She was keen to clarify her point: “I believe we have the talent in the UK. We have two 27 year-olds (Purdue and Partridge) leading the way but doing their own thing. Why not build a group around them?

“Identify and encourage the younger generation to run the marathon, support them and their coaches for an extended time period – say four years – as it takes years to build up the miles, and learn to race the distance. Then raise the standard and depth in the women’s marathon.”

It seemed only right to give the female athletes in question the right to reply. Partridge and Dixon declined to comment, but Purdue was quick to explain why she was so far off her astonishing 70:29 PB (a time which ranks her 10th on the British all-time rankings) on Sunday. She said: “The weekend was obviously a very disappointing run for me. I was actually running well at 11 miles and then I felt dizzy and fell over.

“I was in the medical tent for around 3-4 minutes before I decided I wanted to carry on running and finish the race. I’m not sure many people realise this. If you look at my splits I went through 15k in 50 minutes.

“I was upset to see what Liz wrote about me. I feel I’ve improved every year since I’ve started marathon running, and that being only 27 is surely a positive sign. She should be encouraging the younger generation. I’m having blood tests this week as something is clearly not right at the moment.”

Carruthers and her coach, Gary Warhurst (who also coaches 16:18 5000m athlete Sophie Cowper and a number of other promising runners), were also asked for their thoughts on the topic. Warhurst said he believes it is possible to reach the top without support, but thinks that the majority probably don’t.

He added: “The talent is there, but I think the system doesn’t maximise it. The entire focus is on potential medallists or finalists at major events, and ignores late developers who don’t peak until they’re older.

“There’s no cohesive plan. Many athletes are being asked to move to longer distances before they have fulfilled their potential at the shorter events, where they may be less successful but are laying solid foundations for the future.

“There’s no feedback or follow up to coach or athlete (not in my personal experience) after they have represented their country. It would be helpful if they came back with advice or some kind of feedback from the team manager or coach.

“However, once selected they’re largely forgotten. At one time the athlete or coach would have been asked what help or support they needed in order to continue their progression.

Although I know London Marathon Events put money back into the sport, I don’t have a clue how to approach them or what their criteria is to receive funding.”

Further to this, GB Duathlon team manager and senior endurance coach at Cheltenham Harriers, Dave Newport (very active on Twitter under the handle @coachnewport), was extremely vocal in his response to the debate. He offers up his support to Partridge and Purdue: “They’re both moving in the right direction, appear to have stable coaching relationships and are very open about the ups and downs of training and racing.

“Neither are getting worse. This is important to remember. A few bad races do not mean you’re failing.”

Newport does accept, however, McColgan’s point that British endurance running isn’t progressing as well as it could be.

Newport’s thoughts on what needs to happen

The Cheltenham coach has set out a number of constructive ways to address the issues, starting with the UK coaching system. He is adamant that athletes should be free to choose their coach and the group they train in.

“I definitely don’t think a central coaching system is the answer,” he says. “British Athletics have ruined far too many athletes by taking them out of their existing coaching and training environment, and thrusting them into new locations, with new coaching partnerships under the National Governing Body (NGB) banner.

“Athletes should be free to retain the services of any coach they like and train in whichever group they wish – but the option to train together, with coaching or advice from a NGB employed coach should be made available to everybody racing at an elite level. Any funding offered should not be dependent on them being part of such a group.”

Staying on the topic of coaching, the Cheltenham coach is critical of the British development structure.

“Coach development in the UK is awful,” he states. “I’ve got zero interest in being talked at by someone who doesn’t inspire me to listen. I have much more fun talking to current and ex-elite athletes, and their coaches – networking with the right people is key. We need everybody to offer their opinion, no matter how radical or tame it may be.”

The creation of a professional athletics system in the UK

On the topic of radical opinions, Newport has an intriguing idea for further developing and encouraging the nation’s endurance talent.

He believes this is one way of allowing athletics to finance itself independent of governing bodies.

“I’d love to see a professional league system that isn’t just for the elite,” he explains. “Teams would self fund – it’s done successfully in French duathlon and triathlon GP series, where athletes are contracted to a team for one season but free to leave at the end. All expenses are paid, with prize money on offer too.

“We need to take back a little control and generate our own revenue, in order to create an athlete-centred culture, where we have races that actually capture the interest of not just those involved, but of the press and public too.

“We need to be able to support our athletes financially. I’m not convinced that the NGB will ever do this in the manner we all wish they could.”

Newport is also a big fan of events organised by independent athletes and coaches, such as the Highgate Harriers Night of the 10,000m PBs and the burgeoning athletics forum, the UK Endurance Conference.

The 10,000m Night of the PBs is the brainchild of Ben Pochee. The 30:46 10,000m athlete grew disillusioned with the ailing national 10km track championships. In 2013 he set up the now thriving event, which this year incorporated the European Cup. The UK Endurance Conference held it’s first event in July, and saw running experts such as Richard Partridge and Mark Hookway address an audience of coaches and athletes on topics including avoiding burn out from overtraining.

Newport questions why it was Pochee, and not British Athletics, who made this happen. He also asks why it took an individual coach (Keith Scofield) to set up the UK Endurance Conference, and not the governing bodies.

He adds: “The NGB should be pushing these forward. They put more time and effort into an open top bus parade every four years than they’ve put into these areas.”

Supporting the next generation

Newport summarises his thoughts when he responds to McColgan’s final point – the Doha-based Scott suggests current senior endurance talent could be directly involved in the development of the next distance generation’s progression.

He explains: “It’s true that so many talented young athletes at U13-U20 level are being lost. British Athletics haven’t got a clue what’s going on at club nights. The NGB looks only at results and records and medals, while the grass roots training development is left to fail.

“Athlete training squads – national for the elite, regional for the next tier down – could be the answer, encouraging athletes to get together on a regular basis. This would allow runners to share their efforts and progression with like-minded people, with support staff on hand to offer advice to them and their coaches, when required.

“The amount of knowledge and advice changing hands would be phenomenal! Kids would have these squads to look forward to when they hit U20 level, keeping them engaged while building their aerobic system.

“It’s at this age when marathon potential can begin to appear, and it’s then that the education for athlete and coach is crucial for British distance running to progress and compete on a world level.”

What do you think? Have your say and get involved in the debate about where British women’s distance running – and men’s for that matter -is heading!