What the D**Q happened at the World Indoors? 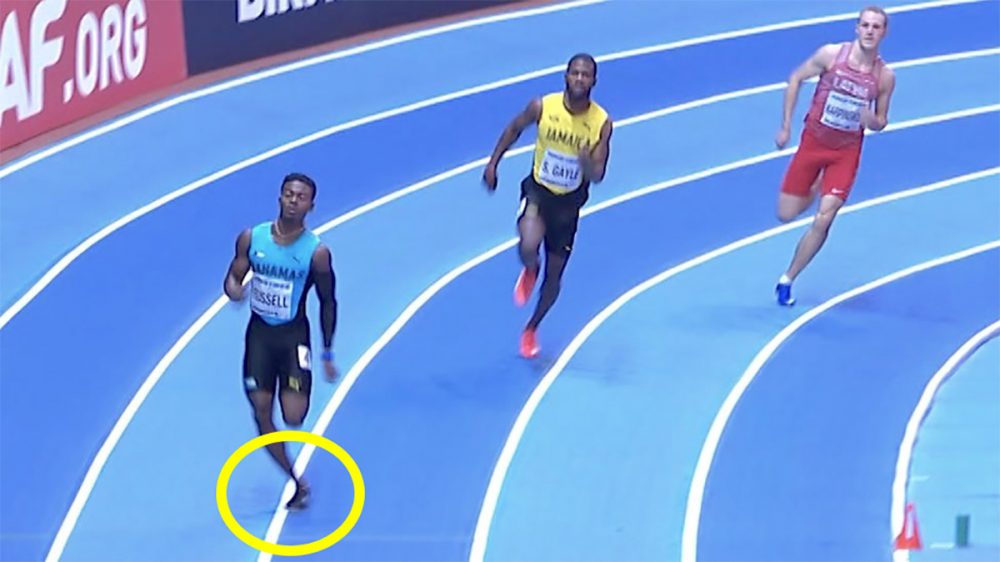 Flashing lights and fireworks – the IAAF World Indoor Championships was set to be the hottest show in town. But, after a record number of disqualifications the public is left scratching its collective head.

It’s fair to say indoor athletics isn’t the grandest draw for the masses, but the recent four-day World Indoors was a fine opportunity to showcase a niche form of athletics.

The likes of Usain Bolt, Mo Farah and David Rudisha have consistently left us with a sense of awe and wonderment on the outdoor. Whilst the indoor version is no less exciting and demanding in terms of skill, nerve and physical prowess, it remains something of a niche.

There were stunning records at these championships, but the memorable ones were for the wrong reasons. And 27 disqualifications (DQs) later, for individuals and teams, the general public is left wondering just what actually happened in the Arena Birmingham?

This year’s DQ rate more than doubles the previous peak from 2013 which was also happened to be held in Birmingham.

Americans were up in arms at the perceived singling out of their athletes, in particular, the disqualification by “overzealous” British officials of medal hope Paul Chelimo. 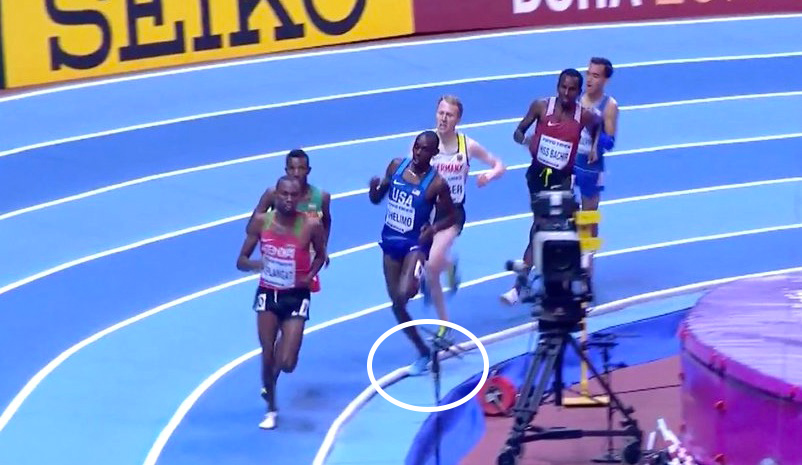 Fellow USA athlete Colleen Quigley, who experienced a disqualification for stepping on the inside line at London 2017, didn’t hold back with her opinion of the officiating.

“I don’t know if they are just out to get people? If they have fun DQ-ing people? But it is brutal out there,” she said after her 1500m heat on the second day in Birmingham. “They are just crushing people for what seems like no reason.

“We are barely able to warm up. The first time we were able to get on the track was today and the curves are extremely steep so I can see how people are falling on the inside.”

The unforgettable DQ moment of these championships came in men’s 400m heats when every athlete was disqualified, a first for the sport and Quigley further commented: “These 400 guys don’t know where to cut in because they haven’t been able to get on the track beforehand. It’s ridiculous.”

What was your DQ highlight?

For athletes, spectators and viewers at home the level of disqualifications was definitely excessive, and in some instances quite farcical. However, while it’s easy to have a go at the “overzealous” officials, they made no mistakes. It’s their job to digest the rulebook, observe the chaos and enforce the rules.

“It all seemed about fair to me,” says former GB international James Thie, who finished fourth in the 1500m indoor final in Budapest 2004. “Our officials are the best in the world, and they’re just doing their job, often in their own time.

“We stick to the rules but do other countries?”

And that’s where the spike (no pun intended) in statistics becomes a little easier to comprehend. The previous DQ peak was 13 at the 2003 hosted Birmingham competition. Comparatively, the British are very good at sticking to the rules. However, when it comes to the IAAF rule book, perhaps a little too good.

This particular debate throws up a complex trade-off between the objective and subjective. Rules try to be factual, humans aren’t robots, and indoor running is frantic. Elbows and tactics have always been a core part of track running, but on a tight, leaning indoor track, there’s a lot more going on.

“It’s part of indoor racing that there’s a bit of physicality to hold your position,” explains Thie. “Plus every track is different, in terms of material, cambers, the angle at which the bend becomes the straight. It would be good if the rules recognised the potential of each track.

“Lane infractions are a tough one, but if you know the rules then stay in your lane. Aren’t you better running at 98% and staying safe? It’s black and white, but perhaps the rules need updating as we don’t want to see the top guys DQ’d before a final. You get to a point where you could DQ the whole field.”

Remarkably, this happened in Heat 3 of the 400m as previously mentioned. It was an event that never managed to shrug off controversy through the competition. In the final, the Czech Republic’s defending champion Pavel Maslak was upgraded to gold after Spain’s Oscar Husillos and Dominican Republic’s Luguelin Santos were both judged to step out of their lanes.

The decision was greeted with boos around the arena, and you can sympathise.

“In the 400m, you see Husillos run sub-45, but how much advantage did he really get?” asks Thie. “Pavel Maslak doesn’t cross the line and feel like a world champion does he?” 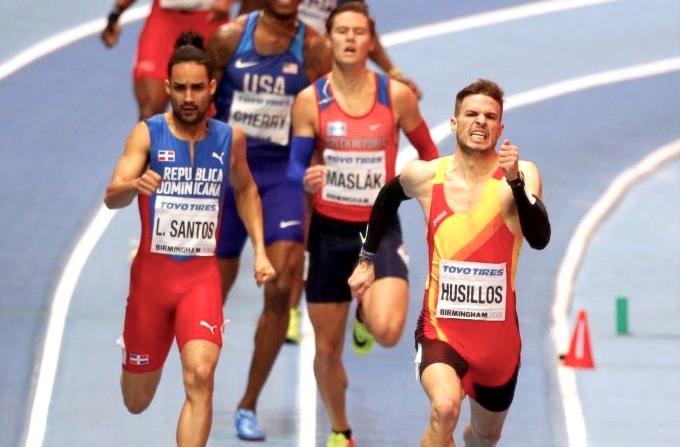 In a physical 800m final, USA had another call to arms when silver medal placed Drew Windle was disqualified for obstruction after contact with race winner Adam Kszczot.

Great Britain’s Elliot Giles was subsequently moved up to bronze. With an appeal launched and four men waited by the podium, Windle was reinstated after much deliberation. “I think common sense prevailed with Windle,” comments Thie.

Herein lies the challenge facing athletics. Did 100% of these infractions clearly affect the outcome of the race? There’s no evidence to suggest so. All we’re left with is a blur between fact and opinion, which in turn begs for discretion. Besides, stepping over the curb after a loss of balance is rarely a major benefit anyway.

It’s not the rules that need a tweak, more the punishments. In the heat of a manic race that’s squashed into a busy schedule, the kneejerk red card does feel harsh.

One wrong foot can scupper years of training and preparation, so introducing more flexible penalties may be a compromise that respects the rules and the athletes in equal measure.

A false start in a motorcycle race and you have to come back through the pits. You’re still in with a chance of winning – it just becomes harder. Moving blocks back or adding time penalties could be a way of modernising the sport without damaging the level playing field.

“The rules just need a minor update to give discretion to athletes,” says Thie. “I hate seeing athletes DQ’d and when we’re trying to sell the sport to the general public it’s sad to see some headlines being written for the wrong reasons.

“I also think with indoors, it’s very much a niche and a bit of an unknown. Our runners get well versed in the rules from an early age, whereas in some countries indoor track is not a national sport and there are no indoor facilities, so they come to an event like this and are in at the deep end.”

Another challenge is applying a standard set of rules to indoor tracks that vary in their make-up. Some are made of concrete, others wooden boards. The height of the camber differs between tracks, whilst the interaction between the bend and straight varies too.

Add to that the pandemonium of runners folding into the inside lane, elbows flying in all directions, and it’s a melting pot of intensely difficult decisions required instantly.

Birmingham’s indoor track and the officials

Does Birmingham’s wooden boards offer more spring? Is the height from the bottom of the camber to the top greater than other indoor tracks? Or was it simply a case of more inexperience and therefore more mistakes by athletes in the pressure cooker that is indoor running?

Whatever the answers, the officials can’t be blamed for the spike in DQs. Rules certainly are rules, but when the best person doesn’t necessarily win every time, it appears the priorities might be a little skewed, and the sport is in need of a little fine-tuning.

Indeed there were many positives from these championships. Take nothing away from Christian Coleman for a blistering championship record of 6.37 in the 60m. Laura Muir continues to put a smile on our faces after securing a magnificent medal double, as did Katerina Johnson-Thompson and Andrew Pozzi with their golden moments.

And who expected the Polish 4x400m world record?

In conclusion, there was nothing sinister going on in Birmingham. No mistakes were made.

However, for the marketing of the sport, this was a gilt-edged chance to attract a new audience and widen the appeal. Instead of doing that, the public is left confused and frustrated, and that will remain the overriding public sentiment.

Should Ireland be happy with showing at World Indoors?
Where’s my medal… and t-shirt?