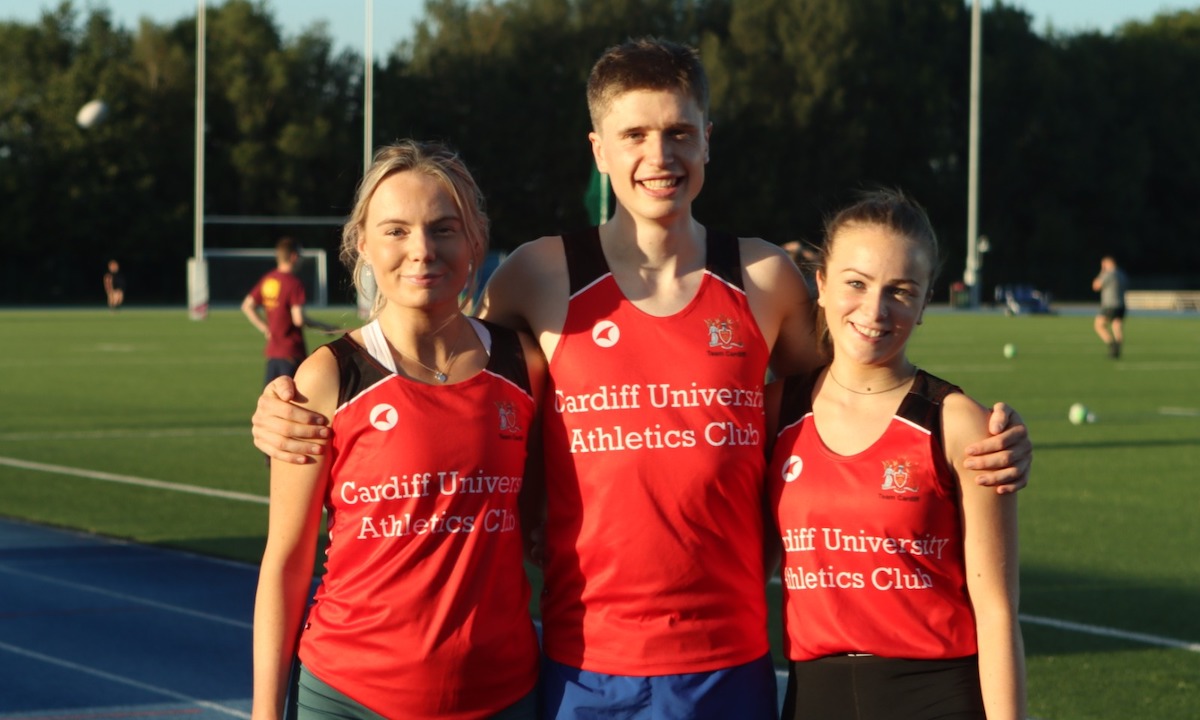 Cardiff is a running city – think Eldoret, but by the sea and with a rugby stadium in the middle. With one of best-attended and fastest Parkruns in the UK and one of the ‘big 5’ half marathons, athletics is popular for all ages and abilities.

The city also has two large universities – Cardiff Met and Cardiff Uni – and the combination of students and a strong running scene makes for some good times and fast times.

A number of athletes have made remarkable breakthroughs onto the international stage while studying in Cardiff – Jake Smith (global Strava sensation) and Jake Heyward (9th in the Olympics), both started as fresh-faced 18-year olds at Cardiff in the last few years.

But obviously with COVID, this came to a complete standstill, and all the fun things we associate with athletics stopped – the group training, competitions, and nights out with teammates. For over a year the university club scene has been in suspended animation awaiting the green light to restart.

And then as of a few weeks ago, it’s all just kicked off again. So why does running at university mean so much to people, and what will it look like as we crawl out from under our rocks and get spiked up for the start of the cross country season?

Cardiff University Athletics Club (CUAC) is a student-run club at Cardiff University, with members taking part in everything from parkrun to national championships, and we look back at how the club has been impacted over the last year but is already making a strong return to form. For those that haven’t been part of a university running club, it’s a pretty all-encompassing experience – a training group, a social group, a friendship group, and a pool from which a lot of people seem to pick their (training) partners.

Running with the same people near enough every day breeds a sometimes alarming level of familiarity, with nothing being out of bounds.

The social side and competitive side culminate at BUCS cross country in February. As many people know, BUCS is one of the best events in the year… and the race isn’t bad either. A 10 hour coach journey really builds morale, or breaks friendships, and also gives people something to talk about for the next 12 months until it comes round again. BUCS cross was in Edinburgh in February 2020, and the club put out strong performances across the board.

Two weeks after that the club was in Sheffield for BUCS indoors, where some huge breakthroughs occurred. Three medalists (Lauren Cooper 3000m silver, Esther Adikpe 400m bronze and James Heneghan 1500m silver) and a haul of BUCS points that Cardiff Uni hadn’t seen in years looked extremely promising for the outdoor season. But then the lockdown loomed..

Because of the timing of covid, and the university regulations which the club has to follow, it is only now that university running clubs are able to return to anything like normality. The combination of firebreak lockdowns, limited group sizes, races being off and socials being effectively banned throughout the year conspired to limit what the club was able to offer.

But during covid, a lot of people’s daily exercise was a run. During April 2020 our Stravas were popping off as previously sedentary friends found running as a release valve.

While Boris would only let us out once each day, people took the opportunity to run around their local park or golf course, or just run on the unusually quiet roads. The months of solo training we all had to endure needs no further explanation, but living like a professional athlete for several months with plenty of sleep led to some people getting very fit and deciding to take athletics to the next level.

Others just found a regular training pattern, running maybe 2 or 3 times a week, and found that regular running helped them in one way or another. Either way, lots of people have found something new and exciting in their own running and were itching for its full return. When Athletics did restart the improved training showed through! The short Summer season ended with 4 athletes at British Championships, a huge achievement for the club, and this momentum kept rolling into 2021.

After the indoor season was decimated by COVID restrictions, Summer rolled around and was fantastic for Cardiff Uni students. Jake Heyward finishing 9th at the Olympics was a huge highlight for the University and the CUAC record books were rewritten left, right and centre.

The depth in the club has shone through too in recent months. The ever popular 5k distance saw Theo Doran run 14:40 and Lauren Cooper 16:39, with Connor McCann, Alex Jackson, Callum Campion and James Meiklejohn breaking 17:00 and a sub 20:00 performance from Ellie Kiff.

A few brave (or crazy) CUACletes have even taken on the marathon this year too, with debuts for Rhys Singleton and Caleb Roberts (raising money for Crohn’s & Colitis UK).

With the buildup to the cross country season starting now and the faint jangling of cowbells and smell of wet grass beckoning, CUAC will be looking to expand its crockery collection further at the Gwent League by fielding as many athletes as possible throughout the races.

Right now it’s like we’ve just climbed down out of the clouds off Pen Y Fan – everything seems a bit brighter and more vivid than it was before.

The enforced break and lack of continuity means it’s a chance for the club to do things differently and harness some of the pent-up enthusiasm. There are people that want to try athletics for the first time and are working their way through the Couch to 5k programme, or have realised they have what it takes to perform on the big stage. There’s also a few new things going on in the life of the club. We’ve formalised the links between the club and the Team Thie (James Thie) and Smiendurance (Steve Mitchell) training groups, and will be getting physio sessions for club members from abloc physiotherapy.

We are extremely grateful to James and Steve for their support as they have moulded many of our athlete’s successes over the last few years. So far, the partnership with the group has been everything we’ve hoped for, with CUAC athletes training alongside athletes from many other groups and clubs.

In a few years we’ll be able to let you know which of this year’s crop of freshers have won themselves a national vest. Add in our new sprints coach, Mark Lodge, who coached current second year Nils Rehm to top of the 200m T46 UK rankings and we’re hopeful that we can build on the 2020 BUCS performance.

The life and soul of the club

University athletics relies massively on the boundless enthusiasm of students. Weekly socials, big group runs, and massive support at XC races are all key, and the friendship and camaraderie lifts everyone’s spirits through the rainy Welsh winters.

This enthusiasm creates a safe environment for people to have a healthy relationship with athletics, and students support each other as they make the transition from youth athletics to senior and deal with the pressures of independent living.

Moreover the club’s wellbeing officers and committee members are always on hand to listen, give advice and help with any eating disorders, overtraining, and mental health problems that an athlete is experiencing.

Topics such as RED-S and the female triad have been fantastically brought to the forefront in the past few years by athletes such as Bobby Clay and Jess Piasecki. We want to ensure that we have a community where athletes feel able to discuss any aspects of their health, such as lack of periods (amenorrhea) and eating disorders, in order to support our members for their long term development.

A university club is always building on what’s been done before – and like Trigger’s broom, constantly being remade and reinvented.

Very few people in a university running club hang around for longer than a few years, and those who graduated a few years ago quickly become nothing but distant legends. Students can join the club as a fresher and a year later be responsible for its operation, and then 12 months after that disappear into the world of grad jobs. This means that it can be shaped by its students – and if they decide to make it a broad and welcoming club for athletes of all interests and abilities, there’s nothing to stop that from happening.

Three tips for runners eyeing up the gym
Excuses, excuses