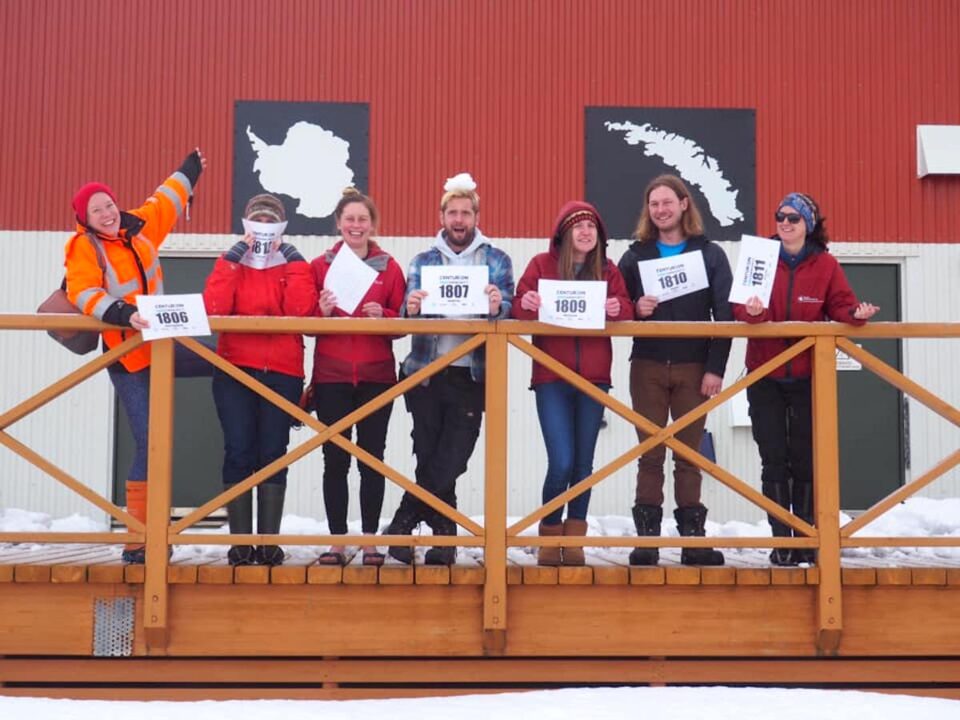 The team who took part on the remote island of South Georgia in the southern Atlantic Ocean. Photo: Katharine Ganly

The virtual race calendar has grown with plenty of different challenges popping up, but how do you feel about the new normal?

A few weeks back I wrote a reluctant piece about the world of virtual racing. Several events were gaining popularity, but this old school racer still did’t full buy in to the idea. It was something for others, but not for me.

Maybe, just maybe, this virtual race scrooge is coming round a little.

The Centurion One Community challenge had a complete range from 5k up to 100 miles and a whole week for athletes to compete. It was less about fast times, more about getting the community together and it was wonderful.

Along with a whole host of my coaching athletes, I signed up. Coming back from injury and doing a large volume of cycle training, a 50km week seemed sensible and just about achievable. Our group had runners from 5k all the way up to 100 miles.

We’ve spoken about motivation on Fast Running a lot recently. The COVID-19 lockdown has effected many people in different ways, from raised anxiety to a hopelessness around training. A sense of belonging and social interaction is an important part of motivation. So is having tangible goals.

So the virtual event provided both. With all our targets set, plans made on how to achieve them and excitement building, we introduced another Whatsapp group into the world and started sharing selfies.

Runners from as far afield as Tasmania, the US and across the UK joined together to share the adventure and the carbs consumed to make it happen. As a coach it was brilliant to be a part of, finding inspiration for my own running from the athletes I work with on a day to day basis and smiling at the 100+ messages each day.

We all love running and no matter how busy or strange our lives have been recently, we loved talking about it too. Plus hearing Dan Lawson’s personal interpretation of London slang was an added bonus.

Across the whole community

As of writing this nearly 3500 people had submitted results, with four Octogenarians getting involved as well. Brian Hird (85) and Margaret Smith (86) were the oldest competitors, with Hird running 5km and Smith tackling the half marathon distance.

1190 people finished 100 mile, with the quickest being wheelchair user Claudia Burrough in 15:20:15. There’s a great podcast interview with Claudia on the daily updates from organiser James Elson.

“The response from the whole community has been absolutely fantastic,” said Elson. “Seeing whole families out together, sharing the miles and supporting each other has been a particular highlight for me.” It’s not just the ultra running community that is built upon a mutual love of putting one foot in front of the other, but the wider endurance scene.

The Virtual National Road Relays kicked off a host of shorter events, such as the popular Podium 5k series and BMC Mile and kilometre events.

A spot of controversy

Virtual racing isn’t without it’s vocal opponents still. Not a day goes past without someone moaning about the point of them all, but if the people taking part are taking something from it, then what’s the problem?

Yes, seeing someone update their Power of 10 with “lockdown PBs” is a little strange, especially on some of these 800m road loops where it seems the runner is jumping over people’s houses on the way round. But if you accept a virtual race for what it is, then there’s nothing to lose sleep over.

Seeing Podium 5k change their rules to an out and back run for the final round did bring a wry smile to my face, as I imagine it did Adam Hickey’s too. My own virtual 5k was done at an open access track here in Italy, 12.5 laps to be sure, but still my watch pinged it as 4.99km. You can’t win.

When we’re back on a real start line the virtual times won’t matter, but they might help an athlete stay motivated to get to the real race. There will also be a boost to confidence and we might see some spectacular implosions if people pace off their new PBs. All the more fun to watch.

We all want racing to come back, but in truth no one can be certain when that will be. Personally, I remain optimistic and actually have a cycling race at the start of July in Italy so maybe a precedent can be set in European countries slightly further ahead.

Until then the virtual challenges don’t seem too bad now. The West Highland Way virtual race is up next from the 12th June and teams of three seem like a great excuse for another big Whatsapp group. More pictures of local trails, homemade bread and sweaty faces sounds good to me.

So if you’re still against virtual racing, ask yourself why? It may not be for you, as I felt, but it could provide a little something we’re all missing at the moment. A community love of running. Fast, slow, trails, hills, road or on the track, it might just help you keep the motivation strong. The next Centurion Challenge is already planned for July, but with a more vertical nature. Entrants have a week to see just how high they can climb, with Ben Nevis, Mont Blanc, Everest, Rum Doodle and Olympus Mons among the targets. I think I’ll do that one on the bike.