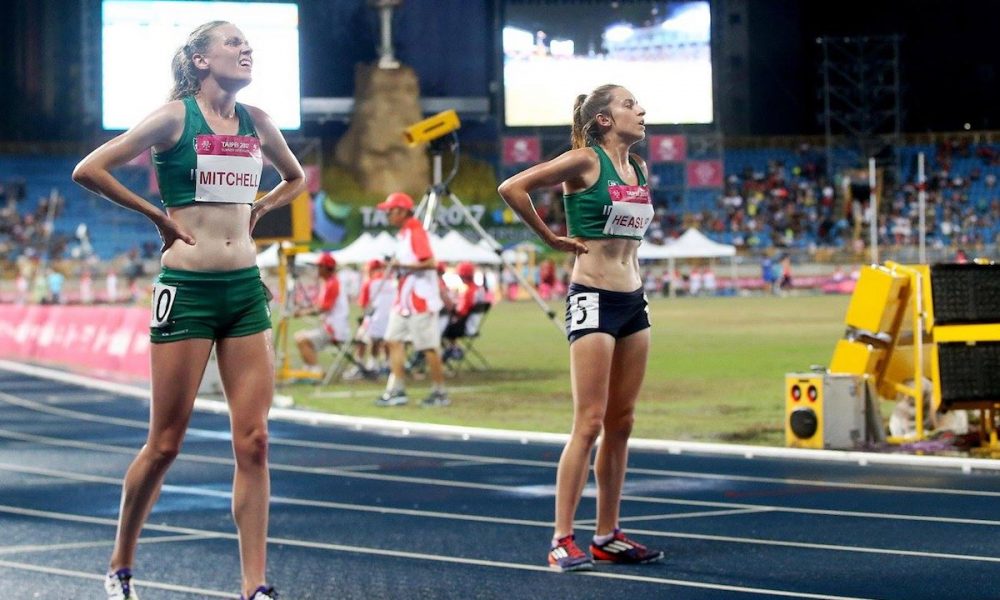 There are a lot of reasons to be optimistic, but what are the main issues and solutions to the generation gap in Irish distance running?

If only it were that easy!

When every recent women’s distance running team – European Cross Country teams, World Half Marathon team, Olympic marathon team, European Marathon team – has been dominated by those over the age of 30 (and in some cases over 40), it’s easy to think that there is no young talent coming through in Ireland.

Yes, there’s a shortage, but it’s by no means a drought.

And some of the emerging talent will be wearing the green vest on Saturday night at the European 10,000m Cup in Highgate, London.

Emma Mitchell, who has already run inside both the European Athletics standard of 33:20 and the tougher Athletics Ireland A standard of 32:55, has all but booked her place in Berlin. She will be looking to further reduce the 32:49.91 personal best and Northern Ireland record she set in finishing 15th at last month’s Commonwealth Games, in what should be more favourable conditions.

Heaslip, yet another of Ireland’s accidental runners, only took up the sport in 2014 to keep fit for Irish dancing, has quickly become one of the nation’s top distance runners. At the Great Ireland Run in April, she added the Irish 10km title to her Irish senior cross country crown, and followed that up with a strong second place at the recent Great Birmingham 10k, in a personal best 34:19.

Highgate will be Heaslip’s first attempt at the distance on the track, but her 16:09.62 5000m PB, set at the World University Games in Taipei last summer, along with her strong performances on the road, and her continued improvement this winter, suggests she’s more than capable of a solid debut.

McGlynn, too, has the potential to finish inside the Berlin qualification standard. She ran her 33:16.73 personal best at the Highgate event last year, on what was her debut at the distance. A former junior protegee, McGlynn spent a number of years away from the sport, before returning in her early thirties. She has been putting in some strong performances this spring, including a top 3 time at the English National Road Relays and an outright win at the Hyde Park 10km. After some success on the roads, Ross made a return to the track in April and ran a personal best 34:05.59 in a mixed race at the Scottish 10,000m Championships. The Armagh AC/Shettleston Harriers’ athlete will be full of confidence having made the Irish teams at the European Cross Country Championships and the World Half Marathon Championships in the last few months.

McGlynn and Mitchell, with their superior PBs are scheduled to run in Saturday night’s A race. Ross and Heaslip, provisionally scheduled to race in the B race, alongside others with best times in the 33 to 35 minute range, so will need to be near the front of the field to challenge the qualifying mark.

Bethanie Murray, Ireland’s sole representative in the Under 23 race at the European Cross Country Championships last December, goes in the C race.

Mitchell (24), coached by Eamonn Christie, and Heaslip (23), guided by former Irish international Niamh O’Sullivan, could go a long way. They were Ireland’s only representatives in the Under 23 race at the 2015 European Cross Country Championships, and both have grown in reputation since their mid-pack finishes that day.

Heaslip is no stranger to competing, and succeeding, on the biggest stage and in 2013 won a medal at the World Irish Dancing Championships in Boston. Mitchell, one of Northern Ireland’s brightest talents, has shown great composure on the international stage thus far. Ross, along with Laura Shaughnessy (who made her senior debut at the World Half Marathon Championships and has a 73:59 PB for the distance), both aged 27, may well form the backbone of Irish marathon teams of the future.

McGlynn is a reminder that even the standout juniors, who seem lost to the sport in their twenties, can still rekindle the love for the sport, and fulfil at least some of their former potential.

But, irrespective of the optimism surrounding the development of Mitchell, Heaslip, and others, we can’t ignore the lack, in numbers, of athletes making the jump from junior to senior level. And we must be mindful of placing all our hopes and optimism on the shoulders of such a small number of individuals. In a country with such a strong distance running tradition, that’s a big burden to be shared among so few.

Irish junior teams at the European Cross Country Championships between 2008 and 2012 have produced five Irish senior representatives, including two Olympians, as well as a number with the potential to succeed at an even higher level, and those, like Síofra Cléirigh Büttner, who has clearly not yet reached her best.

Whether the five teams since will produce as much success, only time will tell, but early indications suggest injury and dropout will, unfortunately, be the prevailing pattern, with some athletes not still in the sport 12 months after making their first junior team, despite being young enough for another bite or two of the cherry.

And for those that do stick around, particularly those who stay in Ireland, the jump to senior level is an increasingly big one. With the cross country season for senior athletes now condensed into a few short weeks in the autumn, and rarely more than one or two under 23 athletes sent to European Cross Country Championships, athletes trying to make that jump, and not yet ready to race on the roads, have surprisingly little to play for.

And so, we are stuck in a vicious cycle that is difficult to break. Junior athletes on the verge of making a team feel that it’s now or never if they’re ever going to get an Irish vest, and run themselves into the ground in the process. The talented few are branded as the next Sonia or the next Catriona and are burdened with unrealistic expectations. Those that aren’t broken and that stick around a little longer, are the exception rather than the rule, and with most of their peers packing it in, much of the joy is lost.

With so few under 23 athletes still in the sport, the governing body doesn’t feel sending a team to European Cross Country Championships is a good investment. Without the carrot of European cross country competition, or World University Championships, there’s little for athletes to stick around for. Not every 19 year old is ready to become a 10km or half marathon runner, and away from the roads, there are surprisingly few good quality races – either on the country or the track – for senior distance athletes.

Athletics, and distance running in particular, is often called the friendly sport, but for runners in their early twenties, athletics in Ireland can be a lonely place.

Solutions are not easy, and spending less time on Instagram isn’t going to make anyone a world beater.

But as our relatively small talent pool continues to be eroded by injury, burnout, dropout, disillusionment, unfair pressure, a lack of competition, inadequate coaching expertise, our obsession with the leaving cert, the inflated role of alcohol in our society, and our mental illness epidemic, maybe the solutions lie in working with the current trends rather than against them.

Maybe junior success isn’t all it’s cracked up to be. Maybe Ireland is a nation of late developers and accidental runners. Maybe individuals can spend time away from the sport and still be successful. Maybe Ireland’s next marathon generation haven’t even started running yet! But one thing is for sure, a system that contains just international stars living out our dreams, and fun runners bankrolling the system, can never exist. We must do all we can to attract, encourage, retain and develop more competitive athletes, irrespective of their level and ability. The more difficult it becomes to make an Irish team – through competition for places rather than unrealistic standards – the better the outcome.

Yes, we have far too few athletes capable of competing at a world level. Yes, we could be doing better. And yes, absolutely, we’d all welcome fewer social media updates reminding us what we, too, could have won.

But who are we to sit on our sofas, telling athletes, via social media, that they should spend less time on Instagram or Twitter? Athletes who, when they get injured, are quickly forgotten about. Athletes who are often ploughing their own furrows. Athletes who, if ever they received a phone call from somebody within the sport, might realise there is a point to carrying on.

And if you’re on social media bemoaning the current situation or slating someone’s performance, instead of coaching a session, giving some advice, or picking up the phone to someone who may benefit from a few words of encouragement, then maybe you are part of the problem, not the solution.

None of the Irish athletes competing in London on Saturday night are likely to emulate the achievements of Sonia O’Sullivan or Caterina McKiernan, but Ireland shouldn’t give up hope of ever having talent like that again. So the more Heaslips and Mitchells that we have to share the burden of expectation, and to raise the bar, the more likely we are to find that world star.

Winter is coming: is Jakob Ingebrigtsen peaking too soon?
Will GDPR impact clubs, events and sites like Power of 10?