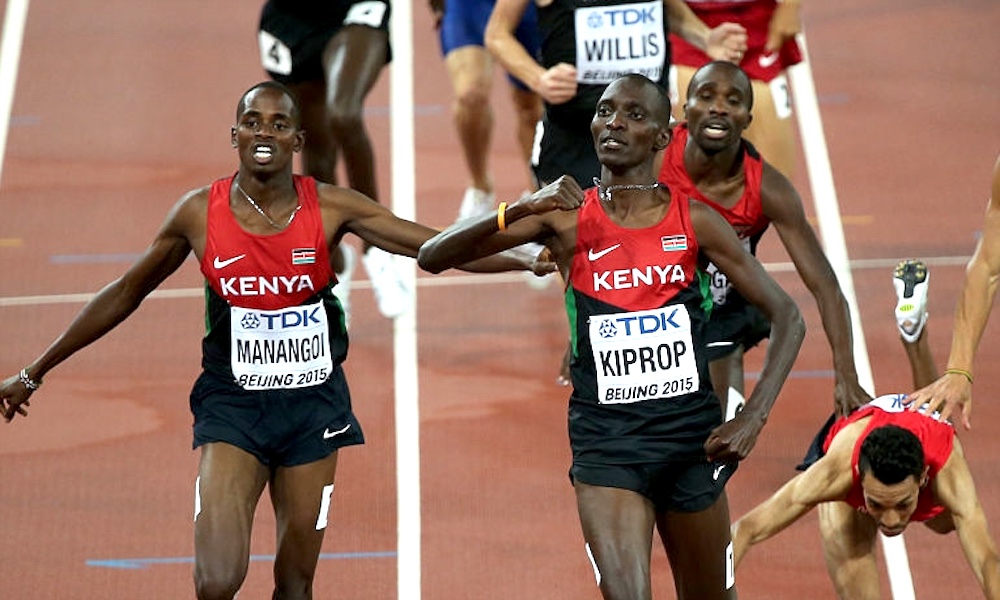 Following the reaction to reports that Asbel Kiprop has failed an out-of-competition drugs test, Adharanand Finn says all Kenyan athletes should not be tarred with the same doping brush.

I was just settling down on Wednesday night to watch my football team, Liverpool, in their biggest match for 10 years, when news came through on my phone that former Olympic champion Asbel Kiprop had been reportedly busted for using EPO.

Next came the barrage on Twitter and Facebook (I dared not look on the letsrun.com message boards) … “and we thought they were just genetically faster”, “and they say the secret is ugali”, “Kenya should be banned from all international competitions”.

I don’t remember all this associated guilt by nationality when Nigel Levine failed a drugs test a few months ago. Nobody looked at Callum Hawkins or Katarina Johnson-Thompson any differently as a result, and why should they? They didn’t train with Levine, they probably didn’t know him, they may never even have spoken to him. Not all Americans are considered dopers because of Justin Gatlin either.

But that is the leap that is instantly taken after a doping violation in Kenya: hey, look, the myth has been busted, they’re all doping, Kenyan dominance was a sham all along.

I spent six months living in training camps with the top Kenyan athletes in 2011 while researching my book Running with the Kenyans. They don’t all live in the same house, or follow the same training routine or share the same coaches, doctors and physios.

Just like Hawkins, Johnson-Thompson and the rest of the British athletes, and like the rest of the world, Kenya is a diverse and complex place, where some people and groups will bend and break the rules in an effort to be successful, and others will try to make it through talent and honest graft.

When you spend time there, you see that some training camps welcome you in to drink tea and train with them, they hide nothing, while others operate behind closed doors. Some coaches arouse local suspicions, some doctors are said to be behind the problems. On the other side of the coin, some athletes and coaches are held in high esteem and are seen as beyond reproach by their running community. The fact that the big-name Kenyans caught or reportedly caught doping – Matthew Kisorio, Rita Jeptoo, Jemima Sumgong, Asbel Kiprop – all have connections to the same management group should be more significant than the fact they’re all Kenyan.

It’s dangerous to look too closely at the reasons why we see Kenya – and in fact any developing country – differently, why we treat it and the athletes there as one homogeneous block. It’s the same thing that leads people to see the world cross-country championships as boring because it’s “a procession of east Africans” (a phrase I’ve read many times). In the good old days, it was a procession of Europeans, but nobody complained then.

RELATED: Wisdom from Africa: celebrating more than a race win

The problem with defending Kenyans like this is that you get accused of denying or apologising for doping. I’m not doing that. Doping in Kenya undoubtedly exists, and there is evidence that it is widespread. The figure usually quoted is 40 offences between 2011 and 2016 – about eight a year.

Even one is too many, of course, though it is worth noting that Kenya has many hundreds of athletes competing in IAAF events each year. Percentage-wise, the number doping is similar to other nations that don’t provoke any collective condemnation.

One key distinction between Kenya and the west is the poor testing facilities and procedures there. For a few years, Kenya was ruled non-compliant by the world anti-doping agency WADA, although since 2016 it has been compliant. And then, of course, you have the huge incentives to win – in Kenya running is a way out of poverty – and the fierce competition to even get into races, that may encourage some to turn to drugs. It all adds up to a big ball of suspicion.

But what can the clean athletes do about all that other than campaign for more testing? In fact, this is something they have done. In 2015 Kenyan athletes including former marathon world record holder Wilson Kipsang barricaded themselves inside the national federation’s offices for two days demanding more be done to tackle doping.

For some people, the poor testing regime in Kenya, combined with their stellar results, is reason enough to accuse everyone of doping.

When you hear that former Olympic 1500m champion Asbel Kiprop has failed a drugs test, it is sad and a shame, and it may arouse your suspicions of everyone, but it doesn’t instantly prove that Eliud Kipchoge and co are only winning all those marathons because they too are doping.

Don’t add one and one together and get two thousand doping Kenyans. That’s not good maths, and, in my opinion, it’s not fair.

Adharanand Finn is the author of ‘The Way of the Runner’ and ‘Running with the Kenyans’. You can find him on Twitter here.

Matt Campbell’s inspiring story
Why do people cheat at the London Marathon?