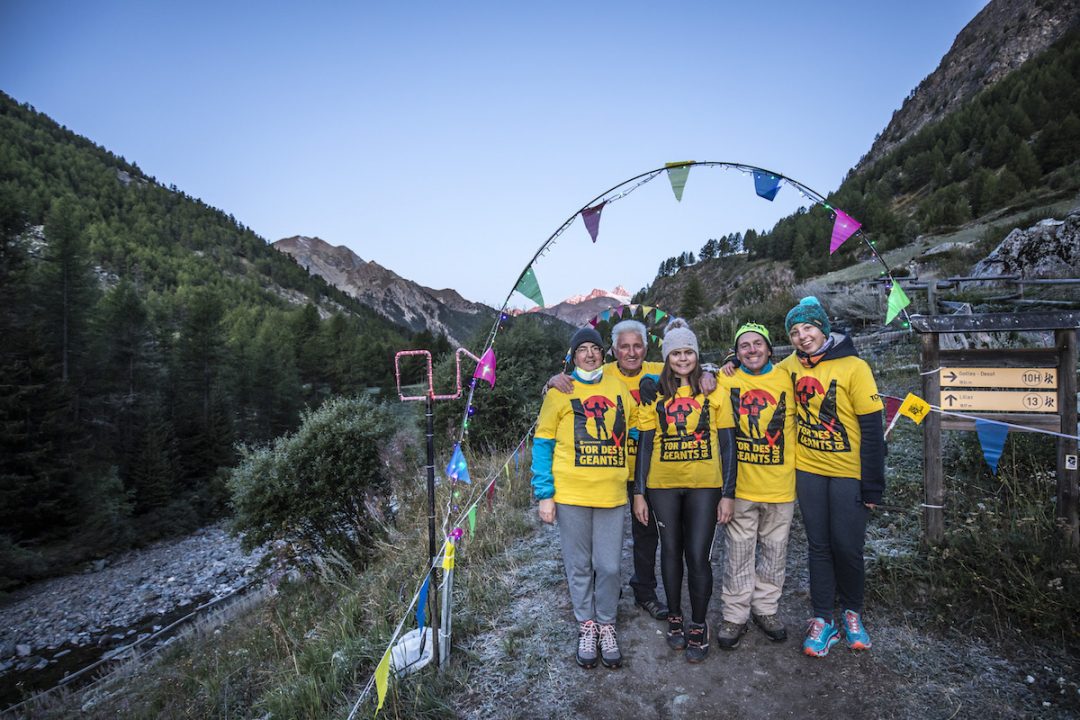 Last week saw the cancellation of the 2020 edition of the epic mountain race, Tor des Géants, in the valley d’Aosta, Italy.

There were many who were holding onto the hope of a big adventure in September this year, but the multi-national event this week emailed participants and the wider TDG family, to pass on the bad news.

Within the announcement President of organisers VDA Trailers Alessandra Nicoletti stresses “It is impossible for us to guarantee the safety of every single runner and their associates, plus volunteers, tourists and the broader Valle d’Aosta community.

Tens of thousands of people who experience the TOR X races on the front line and in close contact, and are a vital part of the activities”.

There were 77 different nationalities signed up for the 2020 event. It is not just the number of runners though, but the huge army of volunteers a 330km mountain race, spanning a whole week, needs.

Along with this was the information that participants would receive a 50% refund on their entry fees, as is stated in the terms and conditions all signed up to with the race. People were not happy.

Privately speaking to competitors signed up to the event the feeling was generally of acceptance of a difficult decision. With entry fees up to 800 for the main race, we’re talking about a significant financial loss here, but the organisers had promised entrants could be guaranteed a place in any of the next three editions (but would have to repay).

Online is a different story

People are outraged at the 50% refund, some posting multiple times about their anger. One Italian calls for a “class action lawsuit” to hold the organisers to account. Others ask that they be given free entry for the following year.

Without being part of the organisation it is difficult to know what this 50% of registration fees goes to support, but year round costs like staff costs, rent, marketing and any deposits or payments for medals, equipment, food, medical services etc could all be part of the economic issue here.

Certainly you could assume that a few people are just committing “robbery in the first degree” as one commenter called it, but if you have really experienced the Tor do you really think the whole Aosta Valley comes together for such a corrupt and immoral purpose? Rewind a few weeks and a similar situation occurred for the rugged 100 mile event in Andorra, Ronda del Cims, only they offered a 70% refund. The backlash was quite vicious and the organisers did actually report threats to the police. Eventually, due to two factors “economic, but above all, moral”, the organisers decided to end the race completely. Gone.

The Ronda del Cims organisers admitted they had lost their main sponsor due to the pandemic, but were willing to take an economic loss of 60,000 Euros so that they could refund 70% and continue to organise the iconic race in 2021 and beyond, but people wanted blood.

The family behind the race was faced with a defamation of their character, threats and eventually could not face it any more. You would imagine this was not the opinion of the masses, as online petitions have since shown, but good people were being attacked for being good people. It was not fair.

The town of Ordino would become a bubbling hub of trail runners every July. Ronda, accepted as one of the toughest 100 milers in the world, was on many an athletes bucket list, mine included. Now it won’t be possible.

Writing this as someone who was not entered into the TDG this year, so not financially affected, might seem a bit off. Yet I do have other races where I have money spent and a possibility I will not see it again.

Some claim that they cannot afford to lose the race money, but it was already gone from your bank. Getting a 50% refund and not having to travel to the event, pay for hotels, food, trips away etc. leaves you in a financially better place than beforehand. We are all suffering the hardships of missing our beloved races, but it pales in significance to the real global issues right now.

We don’t want to think of some fat cats taking advantage of this situation to make money, but if you honestly think this is what is happening then maybe try a different sport instead? Running, ultra running especially, is largely run by people who love the sport.

There are people in it to make money, but very few are pure business people who just want to drain the sport dry. Although they do exist. Some people make a lot of money from this sport, but we cannot simply begrudge people being successful in a sport they love. Often it will have come on the back of many years of financial losses, long hours and hardship.

We need to support each other

Most of this races don’t want our charity either. Ronda del Cims again showed their character at the end of their Thank You piece with the line “On the other hand, do not create any crowdfunding, we cannot accept these initiatives, others are much more needed”.

I’ve spoken to other race organisers who not only don’t want to take advantage of the situation, but want to share the burden that is hitting our community. Ronda del Cims were happy to accept part of the economic burden so they could be fair to their runners. We simply don’t know the whole economic situation for TDG.

The VDA Trailers communicated that “the TOR may have slowed down, but it won’t stop. Ever.”

They seem to have been as fair as they can be, whilst maintaining a chance for the races to survive. I may be wrong and they might well be scamming us all, but if we want this great events to continue surely we need to show some support.

UPDATE: Since writing this my own Italian cycling race scheduled for a few weeks time, “confirmed” to be going ahead multiple times before I entered in May and since, now looks unlikely.

I do feel a bit duped as this was entered very late and strong reassurances were given, but also understand that the race directors do not have an easy job right now and want to be optimistic. If I get 50% back I’ll be happy and at least I can avoid the taper, for now.

Want to run faster? For just £30 per month athletes are provided with a Final Surge plan for each day of the week, coaching advice from Robbie Britton and Tom Craggs, as well as access to the unique Fast Running Performance community. If you would like more information on joining the project, click here.

A race which must be run
Solidarity, Friendship and Respect