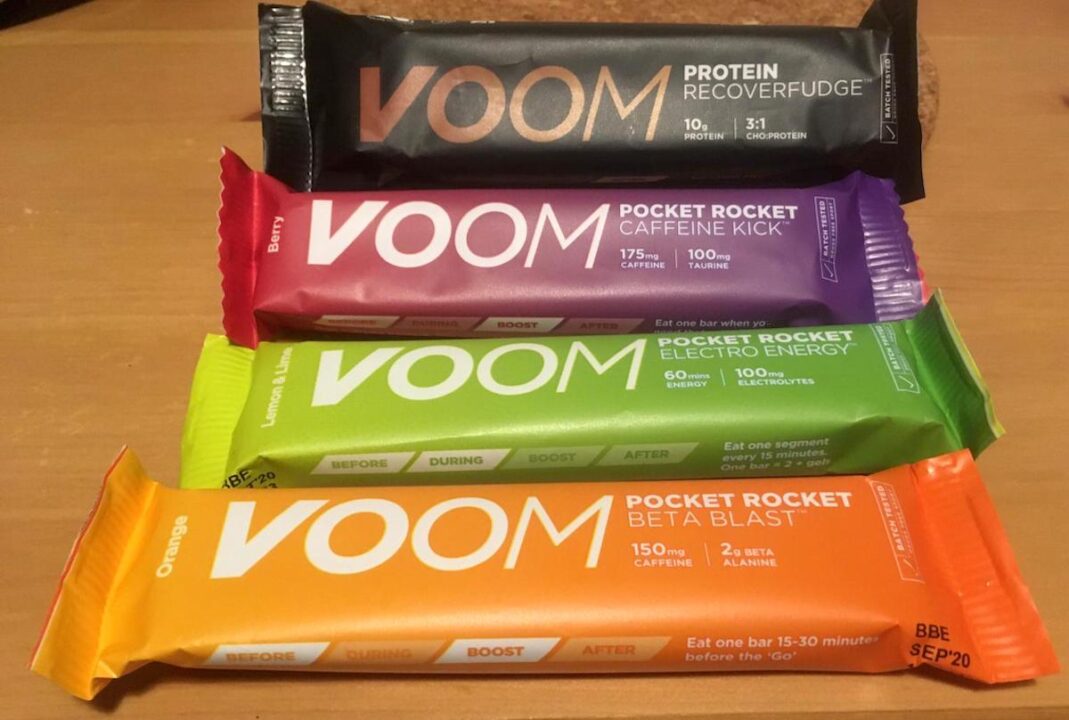 The sports nutrition market has plenty of options, so what do newcomers Voom nutrition bring to the table?

Based in the north of England and with fell running and cycling wonder-woman Dr. Mary Wilkinson as their head of Science and Research, Voom have been around for about two years now.

Their signature products are their bars. With 40g of carbohydrates, the  “pocket rockets are energy products pitched as an alternative to traditional energy gels, in fact with twice the energy of an average gel in one of our bars” says Beau Smith of Voom.

So we decided to do some Fast Running testing (although some was done whilst fast cycling too) and see just how good they are. For transparency Voom Nutrition did provide us with a selection of bars for free, but no money was paid for advertisement.

As a member of the management team for the British 24hr Squad and a Sports Nutrition student, I’m always keen to try new race foods. A few fellow runners spoke highly of the Voom products so when they got in touch it was an easy decision to test some out.

The bars have 40g of carbohydrates so, although described as “one hour of energy” it’s not quite as much as you would need unless you were on the lower side of energy intake for your racing. With recent studies looking at the possibility of ingesting 120g carbohydrates per hour and accepted 80-90g/hour amounts for racing, it’s not a stand alone race food.

With the higher amounts of carbohydrates you would need to take on a 2:1 mixture of glucose and fructose, so the fact that these are 100% glucose does mean they aren’t really a complete nutrition solution.

When asked Voom responded that “in short, due to the level of carbs [40g] we have in our bars, the inclusion of fructose wouldn’t really provide that benefit that it could if we were aiming for over 60g of carbs and therefore solely glucose was deemed appropriate for this product.”

Likewise the website says “the Electro Energy Pocket Rocket provides the perfect amounts of electrolytes to replace those lost in sweat.” Given the extremely individual electrolyte rates in sweat, “perfect” can really vary, with these actually on the low side. Not a bad thing, but it is always worth thinking of finding the right balance for you individually.

One of the first things you will notice is that the bar breaks into four, easy to eat segments. Mountain runner Natalie White found this really helpful in terms of taking on board energy, as 10g boluses of carbs are a good size to be taking on.

The packaging is nice, the bars are a good shape and size to fit into a pocket, running belt or race pack and carrying a bundle of Pocket Rocket energy bars is easy. They are certainly less messy than a gel too.

If you’re at all sensitive to caffeine be cautious with how much you take on, you’ll be buzzing after a couple of these. A can of Red Bull has only 80mg of caffeine, but 1000mg of taurine and a regular cup of home brewed coffee could have 80-100mg of caffeine. So this is rocket fuel in caffeine terms. Let’s start with the electro energy. The best way to describe is a slightly less granular, lemon and lime flavoured kendal mint cake. I like it, could happily eat multiple bars in a row and they go down without too much difficulty.

Unlike an isotonic gel, you do need to take some water on board too, but if you’re well hydrated the bars are very palatable.

Now the Beta Blast and Caffeine Kick have a similar texture, a nice Orange and Berry flavour initially, but a strong caffeine after taste. I don’t particularly mind it, Natalie was less keen, but you will notice it.

Generally all of the bars are easy to eat, enjoyable in terms of taste and not too sweet. They’re certainly not savoury though. Given that I would happily at Haribo for 24 hours in a row maybe I’m not the best person to say whether they are sweet or not.

What athletes are saying?

Kirsty Reade has finished races like the Dragon’s Back and Cape Wraith ultra so knows a think or two about eating for success. “I’ve been using them for a while and I really like the consistency of the bars and the concept of two squares = one gel makes it easy to keep on top of nutrition,” said the Lake District based athlete.

“I’ve found them really easy on the stomach even on long days out. The only thing that would improve them would be a greater range of flavours – currently there’s only one flavour per type of bar, so I tend to make my choice on which flavour I like best, rather than what I want from the bar.”

Not something I’d thought of, but if you don’t want a massive hit of caffeine, then you are stuck with one flavour. It’s a nice flavour though.

British 24hr runner Cat Simpson, who has twice run over 220km in a day, added that “they’re a nice alternative to gels during longer races, especially if you’re having to eat for 24 hours of racing.”

So during your run it’s all about the pocket rockets, but what about afterwards. Desrcibed as potentially the first of it’s kind, the RecoverFudge is bloody lovely. With 10g of protein per bar it’s a little on the low side for a protein product, but it comes with a good 3:1 carb:protein ratio.

Taste wise, it’s really nice. You could certainly pitch it as a pleasant alternative to a protein shake and if you have an athlete who’s not great at getting on board carbs and protein after a workout then it could be a great option.

Would I keep eating Voom bars?

In short, yes. They’re palatable, easy to eat and I enjoy the taste. If I want to get a proper caffeine kick in as well then they make sense. It’s likely I’ll order a few more in the future and could even use them for racing (when we have racing again).

As with any race fuel, test it yourself. If you’re an marathon or ultra runner then now is a good time to be testing new foods in your long run and even for shorter distances you could be trialling gels or bars within tempo workouts or time trials.

There are plenty of food options available and not just sports products. Even when testing the Voom bars on a long ride I also packed a banana, a couple snickers, some energy drinks and topped up with a can of Coca-Cola on the way round. Find out what works for you and remember the gut can be trained.

For more information or to order your own to try, check out the Voom Nutrition website.

Cancellation anger threatens future of events
What the FKT are the Fell Runners Doing?