Wisdom from Africa: celebrating more than a race win 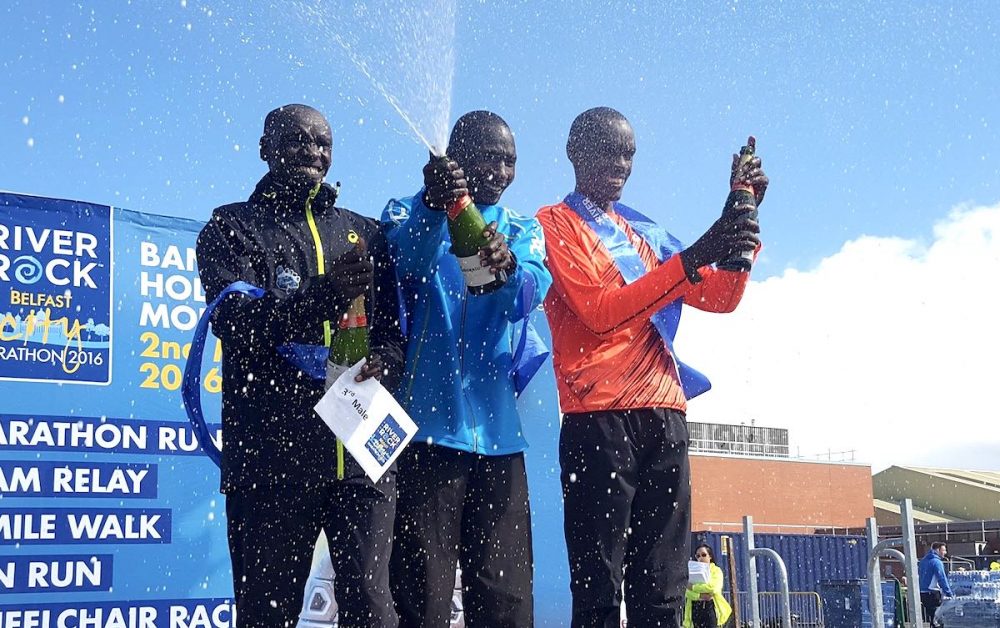 In 2016, Shadrack Kimining Korir made the long journey from his small farm in Kenya to Cardiff in Wales. There he stunned the organisers of the prestigious Cardiff Half Marathon by winning the race in a course record time of 60 mins 53 secs.

One year on and Shadrack’s life is transformed. Now a full-time professional athlete sponsored by NIKE and part of UK based Moyo Sports management agency he has raced in the United Arab Emirates, China and the Czech Republic. He was back in Cardiff last month where he finished second in 60 mins 49 secs. With the money he has earned, he has increased the size of the family farm at Eldama in the Rift Valley of Kenya and made much-needed improvements.

“Here in Ireland, we can switch on a light when we go into a room. We have clean water on tap. We have every comfort. What people may not realise is that the €100 a visiting athlete can win in a local race here can make a huge difference to them. To us, €100 is nothing, but to a subsistence farmer in Kenya – and that is what most of the athletes are – it allows him to buy a few more cows or improve his house,” says Ciaran Collins of Project Africa Athletics, the charity that helps talented young runners like Shadrack find their way and earn a living through road running in Europe.

When Shadrack arrived in Cardiff, he couldn’t understand what a seat belt was and had no idea how to use the lift in the hotel where he was staying. More critically, he had no running gear.

“Fortunately I had brought my shoes over with me and although they were a wee bit small that’s what he wore and I also lent him a running top,” adds Collins, who is pictured below (centre right) with Shadrack (far left). 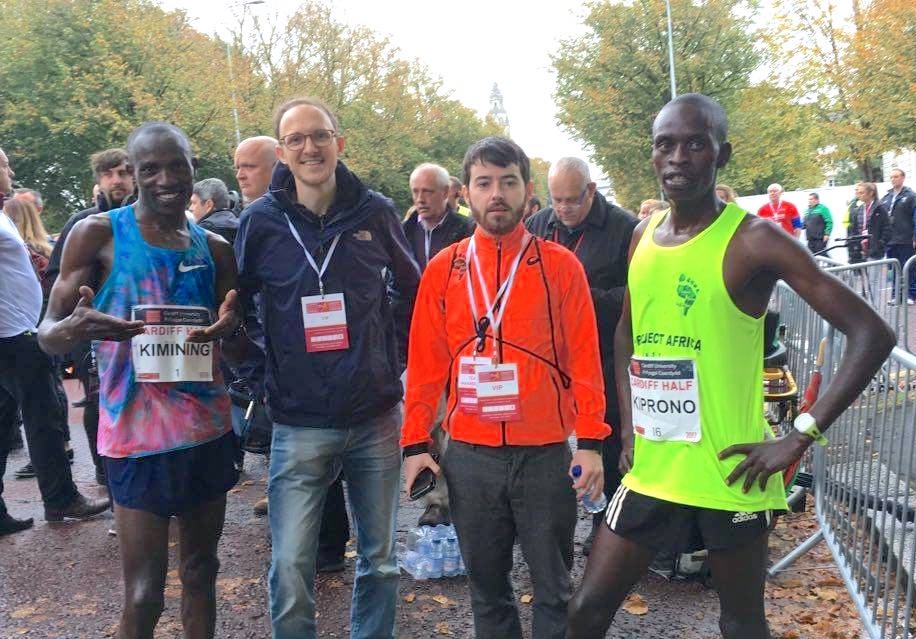 Project Africa Athletics had its roots in a trip Collins made to Uganda as a young student through another charity in 2007. “It had nothing to do with athletics, although I was a runner and always had an interest in athletics, and I was fascinated by the east Africans – why they were so good, how they trained, what they ate. I spent almost four months there, travelling everywhere and getting to know the way of life.”

He was struck by the number of talented athletes scratching a meagre living off the land when with support, they could have been earning a decent living on the international road running circuit.

Fast forward to 2014, when Collins set up Project Africa Athletics as a personal passion; he still holds down a full-time job. Its goal was to support athletes and athletics clubs in rural east Africa, primarily Kenya and Uganda. As well as helping athletes earn a living through running, it aimed to assist athletes in developing sustainable projects in their rural villages and, long-term, to develop a permanent training camp for them.

One of the first athletes the project supported was Dan Tanui who came to Dublin for the 2015 Dublin Marathon, finishing eighth (worth €1,500). He’s been a regular visitor to these islands since then with a second place at the Belfast Marathon, victory in the Derry Walled City Marathon and seventh place (€2,000) in Dublin in 2017.

“When I went back to Kenya with my brother and my dad in 2016, we spent five or six days staying with Dan, who lives in a remote area high up on a mountain. The nearest you’ll find to civilisation is a few hours away at the bottom of the mountain,” says Collins.

Dan and his family, including wife, children and older relatives, were living in a mud hut. “With the money earned from runs in the Belfast and Dublin Marathons, Dan was able to build a new house mostly of corrugated iron sheets and to put a solar panel on the roof. That gives him and his family electricity and a connection to the outside world. The old mud hut is now the kitchen. Dan had two cows and now he has five.

“Considering the long distances between settlements there, a lot of the guys buy themselves a motorbike so they can get around. They also get involved with social enterprises which benefit the entire local community, such as growing coffee in Dan’s case. We hope we can help him with this and maybe end up selling his coffee here in Ireland,” says Collins.

Dan is now a sub-agent for Project Africa, keeping an eye out for talent.

Among the other Project Africa athletes who have become familiar to Irish athletics fans is Gideon Kipsang (pictured left below), who is now a member of Derry Track Club. 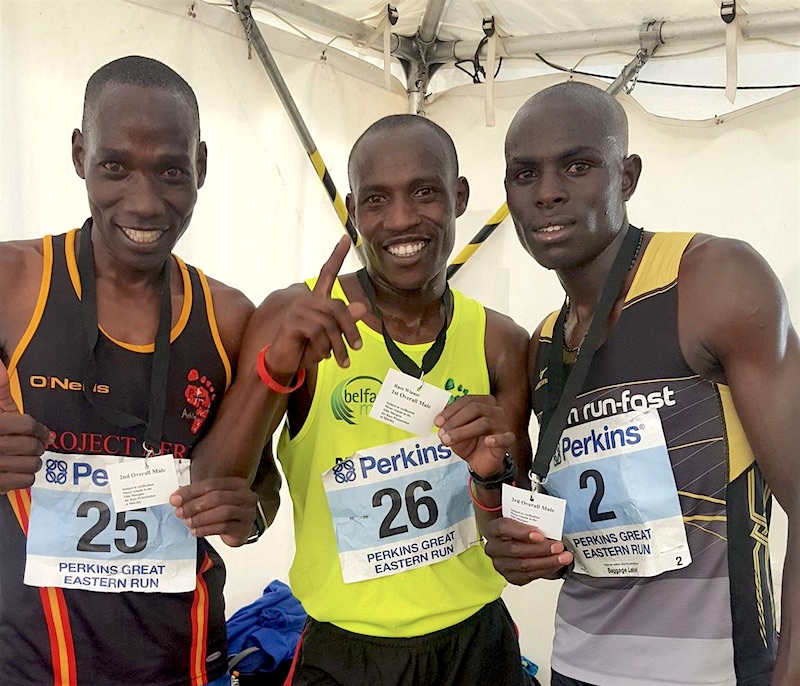 Like Dan, Gideon has a large family to support including his wife and children, his ten siblings and their children, and his mother. He has built his home from trees planted and grown by his father and grandfather and stocked his farm with chickens, sheep, goats and a cow thanks to his earnings from trips to Ireland.

“Whenever you help me here it just doesn’t help me, it helps more and more people”, he says. Because of the state of African healthcare, Gideon’s father James Kimosop, died of a simple hernia 18 months ago at the age of 64. That is the harsh reality of life in rural Africa.

“None of these guys are going to make millions – they are subsistence farmers, trying to survive on barren and poor land. Dan made €2,000 from his seventh place in Dublin in 2017. He’s going to use that money to bring piped water to his house. These are basic things,” says Collins.

Once athletes become self-supporting, it’s time to find others. 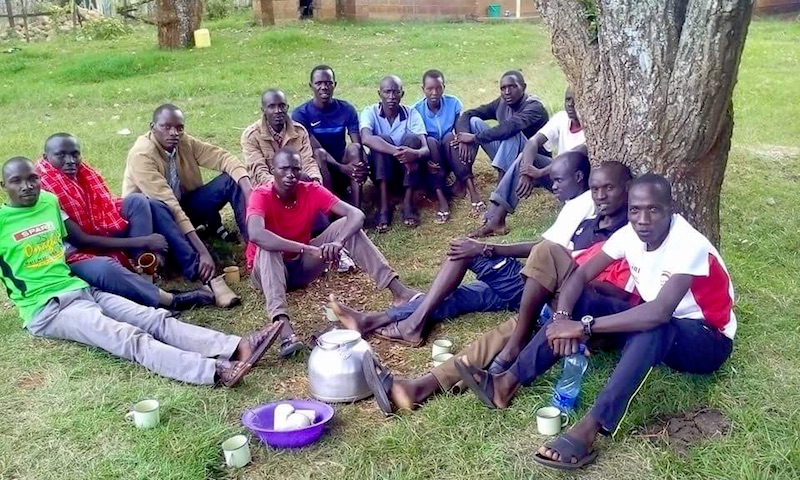 “We have helped the guts of 20 athletes so far. We couldn’t do it without our links to big races such as the Cardiff Half Marathon, the Jersey Marathon, the Barcelona Marathon and, of course, the Belfast and Dublin marathons. Some of these offer flights and accommodation for a few days and we are grateful to them all. Dublin is our biggest race and we get great support from Eugene Coppinger and the team.”

There are also other activities, such as a schools programme called “Lesson from Africa”, where the athletes visit a school and tell the children about growing up in Africa and the cultural differences between their world and ours.

For clubs, there is an endurance workshop, with videos and other material, where local athletes can learn about the training techniques of the Kenyans, their diet and their way of life. 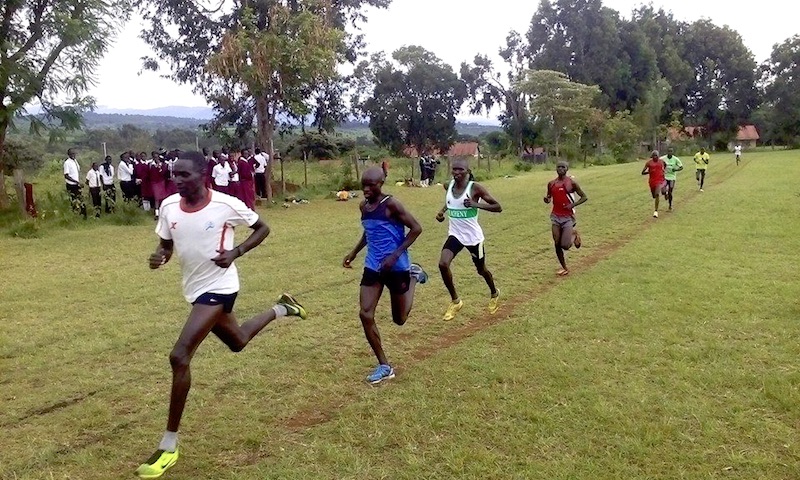 “Here athletes tend to train on their own, with no concept of group training anymore. Maybe our guys should buy into the Kenyan way. In Africa, our lads train with the top people, so they must learn something from that, which they can pass on…”

Then there’s the clothing recycling scheme. “We collect shoes and training gear locally and when the guys go back, they travel with 20 to 40 kg of gear. These guys have lots of training partners back home, including children running barefoot or in sandals, who appreciate getting the gear. It’s important for the athletes who get away – they want to be seen to be giving back to their communities.”

For local athletes who want to try the African experience first hand, there’s also a small camp in the Rift Valley. “We hire a few rooms in a place that’s three hours from Eldoret and near Iten –at the heart of Kenyan running.”

Collins sees huge value in having the Kenyans and Ugandan athletes coming to Ireland and the UK. “We are trying to change the perceptions of African athletes – they are human beings first. This is a humanitarian effort.”

Further information on Project Africa activities, including hosting an athlete can be found here.