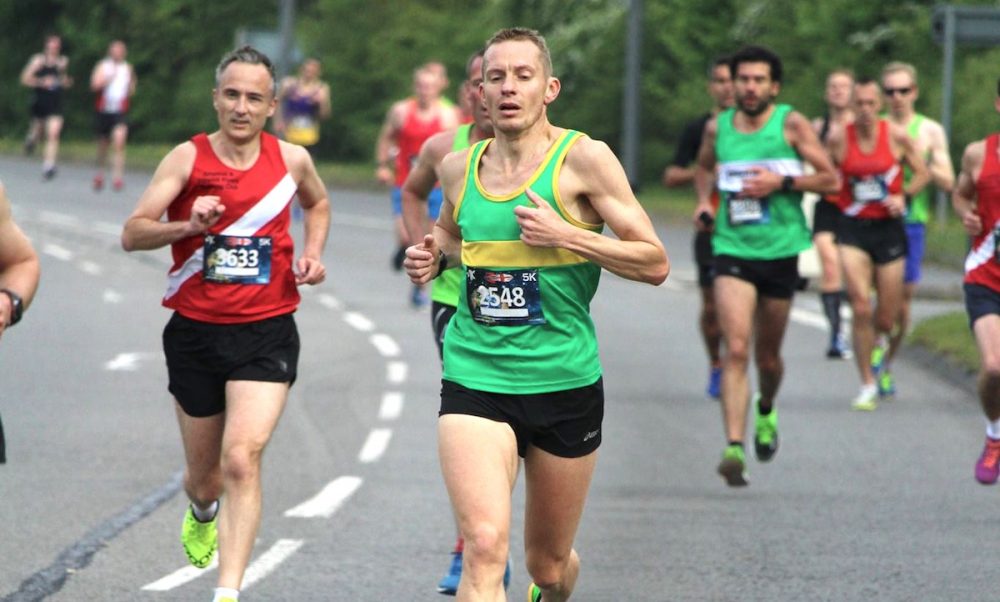 When Ty Farrer was 39 years old, he wasn’t a competitive runner and didn’t belong to a club, and he certainly didn’t imagine he would one day go on to represent his country.

However, things were soon to change, and in late 2013, shortly after his 40th birthday, he took the first steps in a journey that would lead him to an England vest in 2017.

After running 38 minutes in a local 10k Farrer was convinced by another runner to join Southend-on-Sea AC. That was the catalyst that saw him go on and clock a solid 2:52:35 debut at the London Marathon in April 2014.

Over the next couple of years, he steadily chipped away at his 10k, 10-mile times and enjoyed a half marathon best of 74:53 in 2016. He also caught the parkrun bug and 120 Saturday morning runs later it’s a central part of his running week. After moving to Cambridge he then joined Huntingdonshire Athletics Club (Hunts AC).

Then in April 2017, the Hunts AC runner clocked a personal best of almost 10 minutes when he ran 2:43:13 at the Brighton Marathon. The celebrations didn’t stop there and he was selected for the England team as a V40 athlete to compete in the Age Group Masters Marathon, that formed part of the Chester Marathon later that year.

The once unimaginable thought of becoming an international runner was all of sudden a reality. On 8th October 2017, the 44 year-old, who had only been running competitively from 2014, made his England debut. And the icing on the cake? He ran a 2:39:44 PB that day.

In between all the long-distance running, Farrer also did something few things latecomers to running do and explored the full range of running events; from 200m to 1500m, right up to 10,000m on the track, and there was even a steeplechase experiment.

Fast forward to the 2018 London Marathon and Farrer – not Mo – achieved the qualifying time for a second England call-up and is now set for a return to the Chester roads – 19 miles in England and seven miles in Wales – later this year, as a V45 athlete.

Here we talk to the Hunts AC athlete about his motivations to start running competitively later in life, earning that first England call-up, how family and work fit around training, and his advice for running couples.

Fast Running: Why did you start running?

Ty Farrer: It was a good way of relieving stress after a hard day at work really. It allowed me to compartmentalise the problems of the day and return home as a happy human being.

You soon realise that runners are a very positive breed and great to be around, so why not spend more time in their company?

From 2011 I ran a few races just for fun, but I didn’t really start properly until after my 40th birthday (late 2013), and only joined a club after I spoke to a runner from Hunt AC after a local 10k. I had broken 40 minutes and was feeling quite pleased with myself. She then told me she ran sub 38, and then I was really impressed.

I had always thought that you had to be an amazing runner to join a club and that it would be quite elitist – how wrong was I! I soon realised that when you join a club the camaraderie is just brilliant.

FR: What has been your most memorable race to date?

TF: The Chester Marathon in 2017, that was my first time running under 2:40 for the distance and of course the England vest.

I actually paced the race relatively well and really had to work hard those last few miles to get under my target. Watching the clock counting down approaching the finish and knowing I had done enough was a great feeling.

I was so happy to have the family watching at the finish line. Strangely the post-race doughnuts I’d been promised weren’t there…or were already gone!

FR: What was the experience of competing for your country like?

TF: It was very cool and I couldn’t stop smiling all day. Although we didn’t quite have so much support when we crossed the border into Wales.

I felt very honoured to pull on a national vest and I have to thank England Athletics for making this a possibility for myself and many other runners.

I am going back to Chester again this year for my first race in the V45 category, so hopefully, I can do it justice and pull off another PB. If it’s a little bit cooler than London that will be nice. FR: Could you outline an average week of your training and how it fits with family and work?

TY: I normally run five to six times a week. There’s nothing that set in stone, but due to being able to write my own schedule, I can work around races. Long runs on a Tuesday have become the norm, which is nice. Monday is always easy and Thursday is club night.

On a Saturday I do enjoy parkrun before work if possible, but Sunday it’s a toss a coin with the wife to see who gets out first!

It’s not easy to find the balance between work, family and running, but I have a very understanding wife – or maybe she is happier when I am not there.

Days off in the middle of the week with the kids at school helps. And the treadmill in the house when the kids are in bed means there is no avoiding training. It’s a balance, but my boss is also very understanding and that helps massively.

FR: In your relatively short time running, what lessons have learnt that you would pass on to others?

TY: Go for a run without a watch. Forget looking at times in training and just enjoy the experience.

Running is about enjoyment and relaxation first, goals and timings second. If it hurts – don’t push it, running through an injury is just asking for trouble. Get professional advice and do some stretching.

I laughed when my wife Becky used to do her stretching sessions after running – now we do them together and I no longer have the niggles that I used to suffer from.

FR: You mentioned your wife is also a keen runner. What advice do you have for running couples?

It’s great that we have something in common and my wife is very mentally strong willed. When she has a goal and training plan, there is no way she won’t get there.

We did a few runs together in the build-up to London this year. But whereas I think about food when running, if I mentioned this during the run, I risked getting pushed into a tree or river.

Planning was key – knowing when we were both in and free. Who got the first run on a weekend was a coin toss normally. Once we had that sorted, it was great.

During the event – it was great just to be able to witness it and for her to know I was there. She found her first marathon relatively easy though and thinks I have been a bit of a drama queen going on about how tough they are these last few years! (Busted).

FR: What is your favourite training session?

TY: Fartlek sessions – generally because there is no pressure in doing them and you can do what you want.

Although I do enjoy track sessions and we have a good group at Hunts AC. It’s always a great social activity, although no one is usually talking by the time we hit the last rep.

FR: What about your most disappointing race?

TY: Ben fleet 15 [miler, a muddy Essex XC] race in 2015. I went off way too fast and a tough hilly final few miles really caught me out.

I had the wrong footwear on too so I fell four times and doing the final climb on all fours was not a nice experience.

It taught me that without hard work and effort, not only will you not succeed, you won’t enjoy the experience. Train hard, prepare well and race easy(ish).

FR: Has anyone in particular been a big inspiration?

TY: Peter Binns was my PE teacher when I was at school and he led all the year groups round at the local inter-school cross country finals. I could not believe that he could run so far and so fast!

When I joined Southend-on-Sea, shortly after my 40th birthday, Peter was still there running sub 42 minute 10k’s as a V65. Talk about an inspiration!

As I get older, I appreciate the advice and stories from some of the older runners at our club. The days where they would run 52 minutes for 10 miles and still not be in the top 50. Instead of energy gels they had flat coke and mars bars. It’s still all sugar!

Watches were for telling the time, not running. Mention Garmin or Strava in their presence and it’s as if you have said a swear word.

FR: Are you a fan of music when running?

TY: Sometimes and it would have to be the Prodigy when I do. It’s always evident in the pace data when something like fire starter comes on, but most of the time I run without music and just enjoy the environment.

FR: What would be your dream race?

TY: Anyone where I can hit the last 1/2 mile with something in the tank and make up some places.

I have promised the guy that gives me coaching advice that I will run a negative split race at some point this year and I am really trying to! It would be great to pull that off in a marathon or half – watch this space.

FR: After starting to run later in life, has your diet changed as a result?

TY: I would say it’s much improved from what it used to be. Most of my friends think it’s great to work for McDonalds and be able to eat what you want when you want. However, the reality is, when you work with food, you don’t want to eat it as much.

Generally porridge or a banana for breakfast, smoothy or sandwich for lunch and then pasta/salad or a carb-rich dinner – followed by a snack or four in the evening.

I mostly managed to cut out old habits of chocolate and crisps in the evening and go for fruit and cereal instead, but I do have a sweet tooth and the odd treat sneaks in.

I have been known to try and eat my body weight in creme eggs after a winter cross country event.

FR: And finally, what are your plans for the rest of the year?

TY: Now London is out the way, a few local shorter races for fun and some longer track events over the summer. I may yet embarrass myself over the steeplechase again this year, but that’s half of the fun.

Early October means getting stuck into marathon training for Chester again and a winter XC season for the club.