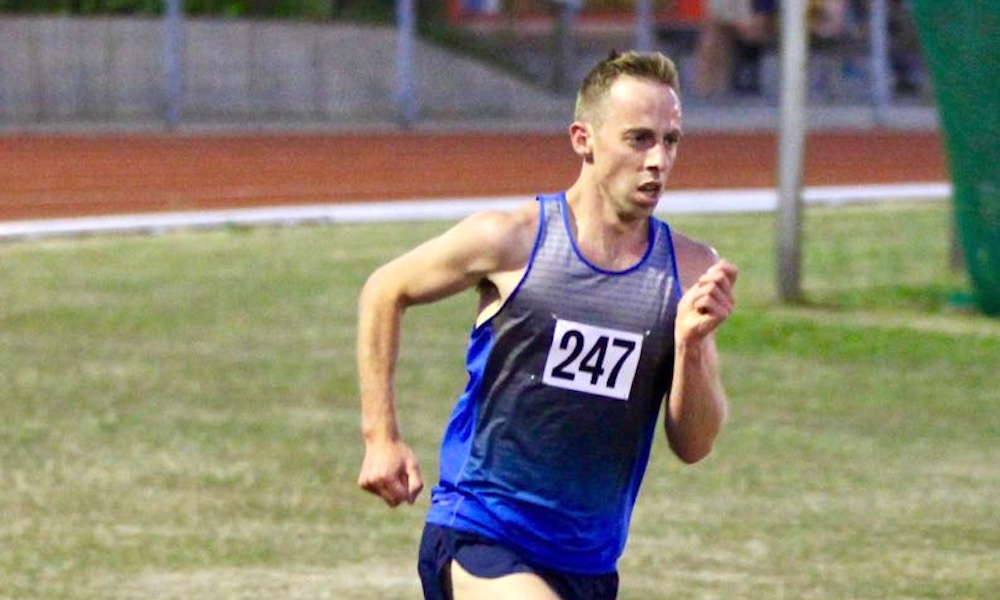 The PhD student chats about the benefits of training with a group, competition in races, and his love of parkrun.

That race saw 11 British athletes break the eight-minute barrier, a feat that has been in years, and although Shelley missed out on breaking the magic mark, he is grateful to people like organiser Mark Hookway, who are taking British endurance matters into their own hands and arranging races that bring together quality athletes on UK soil.

“To run fast times you need good competition,” says the 27 year-old. “Running the really fast times on the track or the road you need company. Doing it alone is really hard work.”

Shelley has clocked his PBs at meets like the Stanford Invitational in America, where there is certainly no shortage of guys willing to share the workload in a fast race, but he doesn’t just speak keenly about the benefits of good competition in a race.

As a University of Mexico alum, he has experienced first hand the benefits of the American collegiate system, where there was never a shortage of group runs and sessions.

“Every morning and every afternoon there were guys out there to share the miles,” says the Alan Storey coached runner. “You looked forward to meeting up with your mates for an easy 10 miler or a track session.

“Back in the UK now it’s different. Everyone has different coaches, different training programmes and we’re all spread out. There is a lot more running on your own. In the US you didn’t have to think about it. You turned up and just ran with the group.”

Unsurprisingly the academic feels that he can “overthink” a session, a race or his training.

“This is where the power of the group comes in again,” he explains. “I’m really grateful for the bunch of lads training in Battersea Park each week. The Cottage Group, set up by Phil Odell and Mark Lloyd, sees some of London’s finest turn up to push each other every Tuesday.”

parkrun for the win

The 3km and 5km specialist recently topped the parkrun weekly rankings with a 14:31 run and was full of praise for the Saturday morning 5k.

“parkrun is somewhere you can go each week and know that there will be lots of others pushing themselves,” he says. “Especially at Bushy Park. It’s not just having fast people to run against but also lots of others are there to try their best. It can inspire you to push a little harder.”

Shelley wasn’t alone in the runners who were out for more than a jog that week in Bushy parkrun, with the top three all finishing under 14:52.

Who made it this week? The @parkrunUK top 10 fastest runners including a top class showdown at @bushyparkrunhttps://t.co/jAMMYt41F2

“The plan had been to do a solid run and then another four or five miles tempo afterwards,” he explains. “I had some blister issues from a track session earlier in the week and fancied something a little softer. The parkrun at Bushy is a great surface.

“When I got there I saw Rowan [Axe] and I knew he was a similar level to myself. Them Tom Farrell was there too. They were both keen on a hard 5k run so we decided to race it.

“I sat in behind those guys for the start and just felt great. Just one of those days were everything clicks. It was the best fourteen and a half minutes of running I’ve had in years.”

Coached by one of Britain’s greatest coaches, Alan Storey, Shelley describes himself as “neither high mileage or high intensity”.

Don’t get me wrong, some of Alan’s sessions are seriously hard, but I’m quite a fragile runner,” he says. “I realised that I don’t need to smash every session.

“Hitting them super hard and then needing time off wasn’t helping me progress. The consistency of months, even years of training is how I plan to better my PBs. I could have run a PB at the 3000m recently, but I set off a little too quickly and suffered for it.

“I’ll probably hit 60 miles per week and there are normally two sessions. Tuesday on the track at Battersea with the Cottage Group or with the St. Mary’s lads and then another session on Saturday. Every Sunday I do 90 minutes easy with my girlfriend. That’s my long run.”

Next up for Shelley is the 5000m at the British Athletics League on August 4. He had previously signed up for the Iffley Road mile (July 28), but after the 3000m on July 25 decided to skip it as back to back races don’t agree with him.

“Thinking I could race hard midweek and do another on the weekend or having a track session Tuesday after a tough race, that’s what leads to injuries,” he says. “To win at these events you don’t need to be the fastest necessarily, but the freshest.

“Take Jake Hayward, a world class 1500m runner, who ran at the 3000m in Watford. If it was a sit and kick event then you’d back Jake all the way but it was a hard run from the gun.

“Athletes like Luke Traynor have the endurance and strength from their 10k running. That showed [Traynor won in a PB of 7:53]. If I want to run my best over 3000 and 5000 metres then I need to be strong and work on my endurance for the 10k too.”

Since Shelley is studying a PhD in anti-doping, you can’t deny his love of all things to do with sports. He currently spends one day a week with the Rugby Football Union for anti-doping education.

Also as part of a Kingston University panel discussion on the subject earlier this year it was clear that the student-athlete has found a passion. A firm believer in clean sport, it is reassuring to know that people such as him are making it happen as both an athlete and within the academic/organisational side of things too.

In terms of his own racing, he simply states: “I still believe I can break my PBs. I’d have stopped if I didn’t believe that.”