Shalane Flanagan will run with freedom in New York 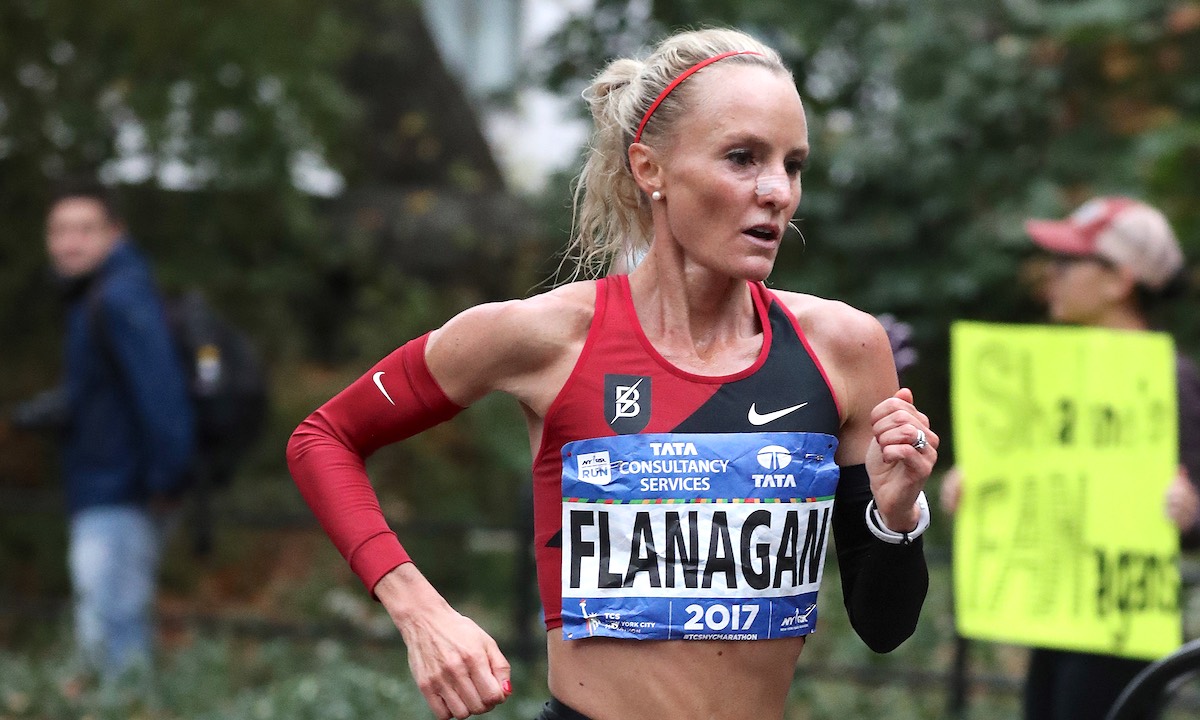 The defending champion could have walked away on a high after her historic win last year but she decided to return to do what she loves.

At 37 years of age, the American athlete knows her chances of retaining the title at the New York City Marathon rank somewhere between improbable and impossible.

And yet, she’s back, resisting the allure of retirement for one last battle against the world’s best. But why? After summiting the Everest of distance-running last year, why not take your chips and run from the table, doing what so few other elite sportspeople have managed – go out on top?

Truth is, she thought long and hard about it.

“When I crossed the finish line I was unsure about my running future,” says Flanagan. “I’d accomplished a lifelong dream and I thought, ‘what can top this?’ But I wanted to give my hometown marathon, Boston, one more go.

“I felt physically and mentally that I’d still have what it took to compete at the highest level.” Those best laid plans went awry, however, as Flanagan shivered her way to the finish on a cold, wet and windy day in Boston last April where she finished sixth in 2:46:31.

“I wasn’t able to execute the race I’m capable of,” she reflects. “It’s like studying for a test and you think you’re taking a history exam but then you get a math exam. It wasn’t a good representation of my ability.”

No, she thought, that’s not how it should end.

New York or not

In the months after Flanagan faced a conundrum, a question of whether she truly had the desire to come back for one last hurrah in New York.

In May she sat down with one of the race organisers who told her they’d love to have her back, but she said she needed more time.

“I didn’t know if my heart and mind had had enough because I’d poured absolutely everything I had into Boston,” she says. “I had to ask myself if I was really willing to do the work it takes to compete at the highest level.

“I’ve had a really consistent career and I don’t want the final races of my career to be on a downward level.”

But after spending time in Europe over the summer, where she paced her teammate Shelby Houlihan to an American record over 5000m, the fire slowly came back.

The 37 year-old says affectionally: “I said, ‘you know what? Maybe I have this. Maybe I still have the passion and drive and enthusiasm.’

“I know it’s going to be so hard to top last year but there’s something to be said for coming and doing what I love. It doesn’t mean I have to break the finish line first for it to be a success.”

And so she finds herself here, back in the Big Apple, the title of defending champion preceding her name every time it’s announced.

“It sounds really nice to hear that because I’ve never had that in my entire career,” she says.

Her life has changed in many ways since last year’s race. Flanagan made countless appearances on national TV, felt the occasionally suffocating weight of media requests and even appeared in a Super Bowl advertisement in February, a benchmark of a sport star’s fame in US society.

“That was kind of epic,” she says with a laugh. “You work hard and put yourself in a position to have success and then doors open, but I’ve been very careful about what I say yes to.”

Eventually, the spotlight had to be shunned – after all the marathon requires an all-enveloping commitment, at least at the dizzying altitudes of human performance which Flanagan inhabits.

She started specific preparations in late August during a trip to the Big Apple to promote the New York Road Runners’ Run for the Future programme, and while there Flanagan was brought to tears by the news that her latest book, ‘Cook Fast, Eat Slow,’ had become a New York Times bestseller.

Twice a day she went to Central Park, envisioning the first Sunday in November as she ran over the park’s rolling hills, which comprise the final miles of the race.

After that, she went to altitude in Mammoth Lakes, California, training with Chris Derrick, a teammate at the Bowerman Track Club. Then Flanagan relocated to Park City, Utah, for the final month of training before New York. So how does her form compare to last year?

“Fitness is a little hard to assess because I stayed at altitude for the full preparation unlike last year, but I did two key long runs that were really good at 4800 feet,” she explains. “Sometimes I think it’s good not to be comparing, but Jerry is super-happy and I think it’s a good thing.”

By that, she’s referring to Jerry Schumacher, the coach who has guided Flanagan’s career for the past 10 years, ever since he left his job at the University of Wisconsin to work in the professional ranks.

He has since turned athletes like Flanagan, Evan Jager, Amy Cragg, Shelby Houlihan and many more from very good athletes into great ones, as well as currently working with Gwen Jorgensen in her transition from Olympic triathlon gold medalist into a marathon athlete.

“I think of Jerry as my benevolent dictator,” says Flanagan with a laugh. “The most important aspect about him is that he cares. Every coaching decision he makes might not be agreeable to everyone but he’s always making decisions to put me in the best possible position to fulfil my goals.

“He’s a great leader, which comes from his background in being a collegiate coach, and every year he has progressed. As athletes we get better every year then eventually decline, but Jerry is continuously getting better as a coach so I feel really fortunate to work with him.”

At the Bowerman Track Club in Portland, Flanagan also has one of the strongest training groups in the world, with a cache of world-class women working together each day, something that has helped her stay in the sport as she reaches the autumn of her career.

“I really enjoy running with people – it’s a lot easier to run a 20-miler when you have a best friend and someone to talk to,” she says. “I’ve been afraid to retire because I’m going to miss that.”

However, Flanagan has no plans to step away from the sport once she stops racing, with plans already in place to work in a mentorship and coaching role at the Bowerman Track Club.

But this is exactly what Flanagan wants.

“I get excited by seeing exceptionally challenging fields,” she says. “It makes me excited to do the training. I’ve never beaten Vivian and I’ve run against her countless times, so the possibility of beating her excites me. She’s incredible.”

But when she reaches the finish line on Sunday, will that be it for one of the great careers in American distance running?

“I have no idea,” admits Flanagan. “Which is really rare for an athlete not to know, because we’re all so calculated and type-A in planning our futures.” One thing she does know: the pressure is off. Unlike in the past, Flanagan will run with little to prove – to herself or anyone else.

“It feels like I’m more at peace and have a sense of freedom,” she says. “There’s a sense of calm to this approach and not this sense of desperation that I had in the past.”

As the first American woman to win the New York Marathon for 40 years, Flanagan helped imbue her countrywomen with a new sense of belief ahead of this year’s race, something she can’t help notice.

“Success breeds success,” she says. “There’s this enthusiasm that I’ve never seen and this willingness to crush themselves. We have a swagger that we’re bringing to this race.”

If indeed this is her final race, there would be no more appropriate setting to bow out than New York, the concrete jungle where last year, her dreams were made.

Flanagan will toe the line as defending champion, though still a huge underdog – and that’s just fine with her.