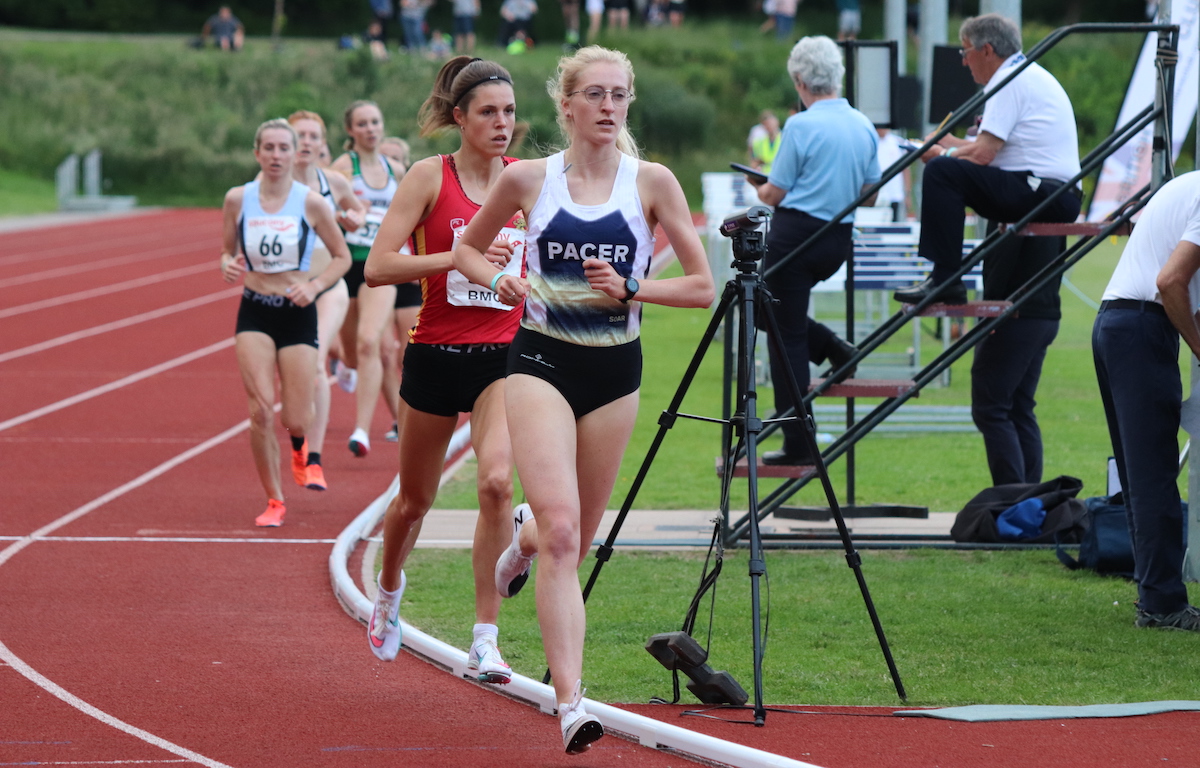 Chasing Lasswade’s Sarah Tait down the home straight in the women’s 3000m steeplechase is a Cardiff athlete who is making her debut over seven and a half barriered laps. As she crosses the line in 10:21.23, event commentator and fellow Welshman James Thie calls over to her that she has unexpectedly broken the national record. Having had the chance to catch her breath several days later and in being sat with coach Luke Gunn, Kate Seary says with a chuckle, “I wasn’t thinking of the record, it was more about just finishing my first 3k chase!”.

Editors note: In an exciting few weeks since this article was written Lauren Cooper ran a new Welsh record of 10:20.03 only for Kate Seary to run a huge new record at the British Champs with 10:11.06.

The former University of Birmingham athlete stresses that her approach to the chase is underpinned by, “Low pressure and enjoying it”. She confesses that, “I don’t really know what race pace feels like at the event”. It was psychologists Michael Apter and Kenneth Smith who did much back in the 1970s to develop what has become framed as Reversal Theory who would have a field day in unpicking these sentiments. Clearly Seary is operating in the process based ‘paratelic’ domain rather than the more pressurised ‘telic’ or goal-centred frame of mind.

Four time national champion Luke Gunn knows a thing or two about the chase and with a nod to his coaching colleague at Birmingham University, he says, “Bud Baldaro and I have been trying to convince her to consider the steeplechase for a good 4 or 5 years now”. With a laugh, Kate fires back, “I guess I should have done it a long time ago but Luke knows I’m stubborn!”.

Luke adds that a commitment to the chase has to unremitting, telling me that, “One of the things that the likes of Tom Hanlon and 1988 Olympic bronze medallist Mark Rowland impressed upon me as an up and coming athlete was the need to taper down and recover from every chase that you do. Its therefore very difficult to get more than a few races in on the flat over the summer competition period because of this commitment”.

The man who represented Team England at no less than three Commonwealth Games stresses that the chase is fundamentally an endurance event because of its considerable aerobic demands. Luke points out that, “You’ve got to train like a 5km runner for that last km of the chase. There are some ‘speedy’ 1500m types who move up to the event on the one hand and then on the other you’ve got cross country specialists who go for it simply because it is so tough an event”.

The man who manages the West Midlands Talent Hub continues that, “Kate has been diligent over the last few years in doing the drills and skills around hip mobility and flexibility. Too many athletes expect this to be able to master this overnight and it doesn’t work like this. If you are thinking about transitioning to the chase then humility is a necessity- you have to accept you are going to knock things and occasionally fall over”.

With a nod of affirmation Kate adds that, “I didn’t start attempting to practice the water jump till last year”. This is what coach educators tend to refer to as ‘earning the right to progress’ and clearly Luke knew that Kate had to learn to train and train to train before training to ultimately compete at a new event.

In being one of Luke’s team of coaches in his role as Head of Athletics at Birmingham University, along with the aforementioned Baldaro, Dean Miller and Sally Straw, one of the things he has impressed on me is the notion of ‘bridging’. Its compatible with the philosophy alluded to of ‘earning the right to progress’.

Two weeks prior to her debut over seven and a half laps, Kate placed second in the 2km chase (6m50.4s) at the West Suffolk Steeplechase Festival and was narrowly edged out on the line by Gemma Kersey. This was a deliberate strategy with Luke adding that, “Ideally, athletes will have started with a 1500m chase at schools level and you see the logical progression”.

Conversation then turns to the differential between 3k flat and chase speed, with both acknowledging that Kate’s 9m39s 3k flat PB needs to come down if she is to achieve the Welsh standard of 9m50s for the Commonwealth Games. We talk about what the expected differential should be between an athlete’s flat 3k PB and chase PB.

I mention National Endurance Lead for England Athletics- Spencer Duval- whose differential of 24 seconds (8m05-8m24s) seems remarkably impressive. Luke responds that, “The differential is likely to be longer for women but it’s a ball-park figure. You have to accept that some athletes never nail their best 3k flat PB on the one hand and others never quite achieve what they are capable over the chase”.

Luke stresses that, “Kate is a natural chaser. You’ve got to remember that most elite women chasers like Aimee Pratt and 2016 Rio Olympian Sara Treacy tend to debut around the 11 minute mark, so Kate’s Welsh record is a hugely impressive debut. We won’t get carried away but clearly she has potential”.

I finish by asking where this potential may lead and Kate allows herself to dream for a few fleeting seconds before responding that, “The Birmingham Commonwealth Games next year would be awesome- Birmingham has been my home for so long – it would be a home Games for me”. She then catches herself and we all laugh as she whispers, “But don’t tell my Dad I said that because he’s a fiercely proud Welshman!”.

Matt Long is an England Athletics Coach for the Vitality Running World Cup and welcomes contact for support through mattlongcoach@gmail.com

Dynamo Dustin destined for Tokyo
Is it always advantageous to be resilient?