Ryan Burling is an advocate of fast running… at all times 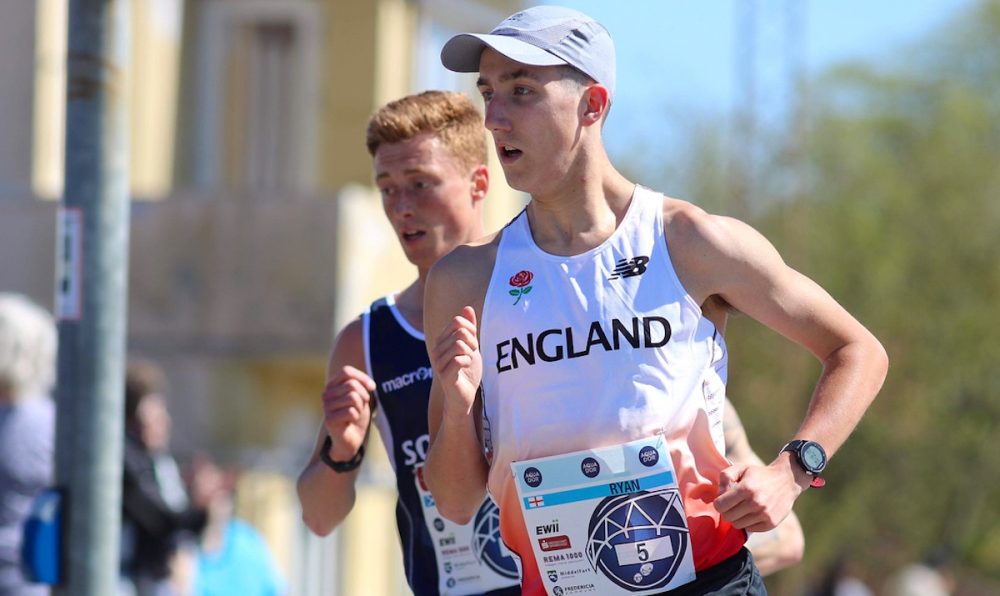 The Guernsey AC athlete credits joining forces with coach Tony Simmons and an average training pace of 5.30min/mile for his step up to competing on the international stage.

Ryan Burling has won every race he’s contested so far this year discounting The Big Half in London, (where he placed 11th in a PB 66:28), and a fourth place at the recent Lillebaelt half in Denmark on his international debut.

Relocating to the Channel Islands has proved a fruitful move for Burling, with the challenging terrain and windy conditions combined with fewer distractions allowing him to focus more clearly on his training, work and recovery.

Featured recently on Fast Running for his dominant winning display at this year’s Guernsey Easter Running Festival, he has run PBs for every distance (apart from 10k) from 5k to the half marathon this year.

Although his greatest improvements have come over the longer distances, the second claim Herne Hill Harrier is keen to make inroads into his track times this year too, starting with the upcoming Highgate Harriers’ Night of the 10,000m PBs in London.

Here we chat with the 24 year-old accountant about his first race representing England, his fast training paces, and how linking up with coach Simmons has reaped dividends for him.

Fast Running: Congratulations on your first England vest in Lillebaelt! Tell us about the race, has it given you a taste for more of the same?

Ryan Burling: The race itself was tough, I struggled with the course and the heat just didn’t agree with my body. I wish it was run in the morning, when it was notably a lot cooler!

But it was an amazing experience, and it’s given me a taste of what it’s like to be an elite runner, so there are a lot of positives to take away. I’m still amazed I got selected, and very proud to represent my country.

FR: Is it true you train hard on every run, with no easy days?

RB: Yes it’s true, I’ve started to get a bit of a reputation for my ‘hard runs’! I do all my runs at 5.30-5.40 pace, it just feels natural to me. By no means am I jogging, but I’m not flat out and always have another gear or two. I tried to run at 6.20-6.30 pace and I found I didn’t get the same benefits and felt terrible, so I resorted back to running faster.

I’ve had a lot of people say I run too fast and should be running a lot easier, but it’s got me to a higher level than most and it works for me, so I won’t change the way I train just yet.

I’d say my recovery runs are just shorter, the speed doesn’t change. I’m lucky that I haven’t had a running related injury for over a year, and that consistency has helped me improve.

FR: Can you tell us about your coach, Tony Simmons, and how he’s helped you progress since 2016?

RB: Quite frankly, I’m in this position because of Tony’s guidance and experience as an athlete. I moved to Tony as soon as I wanted to go onto the roads and focus on the longer stuff, so the progression I’ve had in three years highlights his ability as a coach.

We follow a lot of what he used to do with Harry Wilson (legendary coach, most notably of Steve Ovett), and it’s clearly a system that works well for me. Having the likes of Ian Kimpton (Luton’s 2:15:51 marathoner) to try and hang onto in training meant that I’d turn up to training knowing I’d have to be on my best form to even get close to him, especially over longer reps.

Tony applies hardly any pressure to me and let’s me get on with running (unless he thinks I should be targeting something or need to change something). He understands my busy life and, even though I’ve moved to Guernsey, we speak daily, and I couldn’t imagine having another coach like him.

FR: You’ve made great progress over the last couple of years, with your 10m and half marathon times coming down dramatically – what do you put this down to?

RB: I’ve upped my mileage to 90-100 miles a week during training blocks, and it’s really helped my aerobic system to improve.

Guernsey is also very hilly and windy, so the added resistance is also a benefit.

FR: You had a very successful outing at this year’s Guernsey Easter Festival, winning every event you contested – can you tell us about that long weekend, and how you felt about dominating the event like you did?

RB: The Easter festival is a great event! The 5k is very quick, one of the fastest 5ks I’ve run on the roads. The cross country course is very scenic and takes in mainly coastal paths, you won’t find many courses like it. The 10k is very quick, but the only issue is the race is point to point, so if the wind is blowing in the wrong direction, you’ve had it. It was great for myself and Louise Perrio to win it as Guernsey athletes (although I’m not local originally), and I hope we can get more runners from the UK to come and experience the festival and see what the island has to offer. The presentation at the end of the week normally results in a night out too!

FR: How did you end up on the beautiful island of Guernsey?

RB: I moved to Guernsey for work and to improve my career. It’s a strange move for someone who used to live in Milton Keynes and regularly work in London, but it’s been the break I needed to focus on both my running and career.

I had too many distractions, and it was causing some problems. I couldn’t be happier now, everything’s just fallen into place and it’s having a great effect.

FR: What do you do for work, and how do you juggle your training around your work commitments?

RB: I audit at Ernst & Young accountants, a job which is known for its long hours. During the busy season, I do 70-80 hours a week alongside studying for my exams, which means I often have to run at strange times or miss sessions.

To me, my career will always come first, so I have to maximise the time I have outside of work. It’s all about time management in my opinion, and having honest conversations with my bosses.

If I need to take a longer lunch I can, as long as I get my work done. It’s a great thing to have the support of such a large, global firm like EY to help with my running and my career. We’ve spoken about my post-qualification plans and how they can support my running more, but nothing has been confirmed yet.

FR: You’ve been competing since you were an U13, and came a valiant 284th in the 2012 English Schools’ cross country – did you ever see yourself reaching the level you have back then?

RB: I never thought I’d make this kind of level as a runner. At the age of 16 I went to the English schools to run the steeplechase and thought that would be my only ‘big moment’. However, everything has changed in the last three years, and now I believe in my ability, but it’s not been an easy journey.

FR: You ran your one and only marathon so far aged just 22 – what prompted that decision?

RB: Before I did the marathon I was a track runner, but I fell out of love with it and wanted to do something different. That year I did my first half marathon and won (Milton Keynes in 74:16) and I really enjoyed it.  As I had the championship time, I thought I’d go for it as my move from track to the road.

However, I didn’t run for eight weeks before the marathon due to an injury, so I did it purely for the experience, and, despite running the last 10k in nearly an hour, I loved it (Ryan ran 2:51:16in 2016). It’s certainly something I want to do again, maybe next year if I get down into the 65’s for a half.

I entered London via a championship entry for this year’s race, but decided I need to work on the shorter stuff first before making the step.

FR: What are your racing aims for the rest of the year?

RB: The plan is really to focus on getting quick over 3k-10k now, with the view to running another half marathon in the Autumn. I’m going to try and get over to the UK as much as possible to race so I can get the quality of races I need.

Long term I just want to keep improving and hopefully get a shot at competing for England again. I’d love to get up to GB level, but I don’t want to get ahead of myself, I’ve still got a lot to prove. Depending on my visa rules, I might have more opportunities to run for Guernsey, like the Island Games and Commonwealth Games.

A closer look at Ryan Burling’s training can be found here.