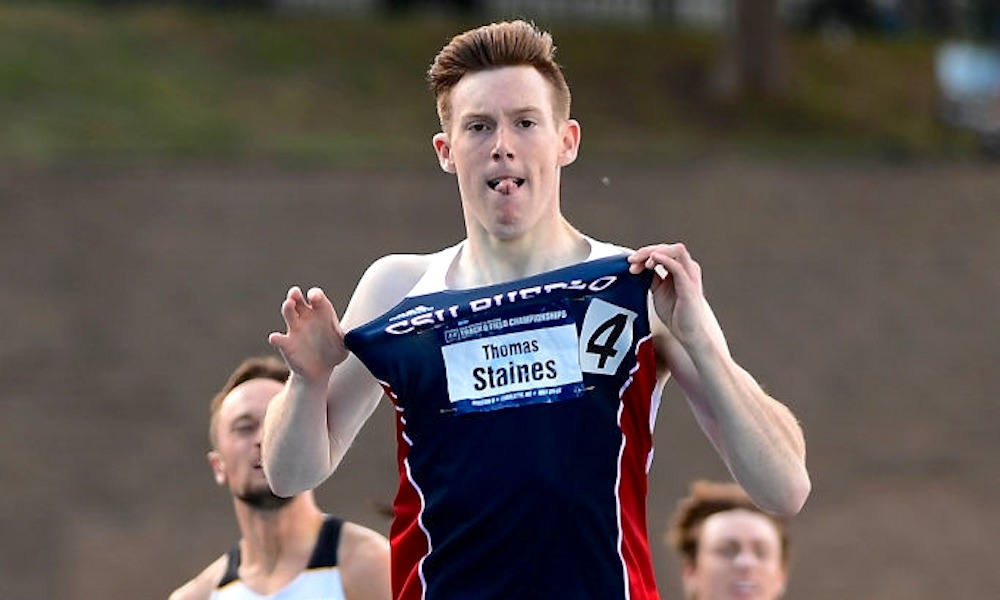 After a quick rise up the 800m ranks, the young 1:45 athlete is sticking to his long-term plan, despite the temptations of the international stage.

With two Olympic runners as parents, Thomas Staines has the genes to go a long way in the sport and, after improving his 800m best by nearly five seconds this year to 1:45.57, he is showing signs he might even eventually eclipse their achievements.

Despite having run for only four years, the 20-year-old son of GB internationals Gary and Linda Staines is ranked 19th in the world this summer.

However, although the Colorado-based runner has run well inside the standard for the European Athletics Championships, he is exercising great patience in sticking to his original plan – saying that his PB win at the Music City Distance Carnival in Nashville at the beginning of June is his last race of the summer.

His father, Gary, was a 13:14 5000m runner who won a European silver medal, while mum Linda – competing under her maiden name of Keough – won a World Championships 4x400m silver medal, two Commonwealth relay golds and an individual silver. Both competed at the 1988 Olympics.

You might say that Staines, who moved with his parents from Britain to the States when he was around four, has running in his veins. On top of the genetics, his parents own a running shop and he was always around international runners growing up.

Yet he wasn’t under any pressure to get involved in athletics. In fact, the Colorado State University student concentrated on football until he was 15 or 16 year-old before realising his talents lay elsewhere.

“I didn’t run before that,” says Staines. “I was just full-on football. I did join the track team for my high school, but used it as soccer training. Then the season came and I realised I was better at running off the short amount of training I did – like 10 miles a week. It was then I thought, ‘this is what I should be doing’.

“It wasn’t just the sport itself but also, the people you meet at track and cross country, they’re more team-oriented, which sounds odd, but a lot of soccer players over here are more ego. So I think the team aspect was the first thing that won me over. Then obviously with how fast I was running, it was a no-brainer.” Running 1:47.82 indoors last winter in his 800m season debut was just a sign of better things to come. He improved to 1:46.56 to win the NCAA Division II Championships title at the end of May and a week later, on June 2, went nearly a second quicker with a storming finish.

“I didn’t expect to be running this fast so quick,” said the 6ft 4in tall athlete, who confirmed he is edging towards eventually competing for Britain rather than USA. “I thought maybe by the time I left college I’d be running times around this, but I’m happy with it obviously. It’s come as a big shock to me but also it’s a big confidence boost to me as well. I’m enjoying it.”

Focusing on his long-term development

Staines’ time ranks him third best nationally in what has already been an amazing summer for British 800m running, with as many runners under 1:46 – eight – as Kenya. But he says he won’t be tempted to compete at Britain’s trial for the Europeans.

“It’s sort of annoying,” he says. “The race I ran 1:45 at, I knew that was going to be my last race, and then I ran it and wished I had more races, but that probably wouldn’t be the smartest thing to do at this point. You kind of think in your head ‘I wish I could run more’, but I’m happy to end my season on that.

“It’s obviously tempting because you watch Diamond League races and you see people running around the times that I’m running and you think, ‘I wish I could do it.’ But we have a plan and I think it’s smart to stick to it.”

“I like racing so I’ll do anything you put me in, but I like the 800m the best,” he says. “I don’t know if that’s what I’ll end up doing, but I definitely like it the best at this point.”

He receives some general advice from his parents but they’re happy to let his coach, Matt Morris, carry on doing what he’s done so well at so far. That said, he has had conversations with his father about the sort of training he did when he was running competitively.

“All I can think is ‘thank God I’m a middle-distance runner’ because the stuff he was doing would break me in half,” says Staines, who tends to run 50 or 60 miles per week at most. “His average pace was like 5:45, 5:30 and some of the sessions he would do were just ridiculous like 16×400 off a minute but all at 63 pace.”

The young student-athlete intends to complete the final two years of his degree at Colorado State University-Pueblo before turning professional. He is studying automotive industry management and has a part-time job fulfilling his passion for cars at Jaguar and Land Rover.

“Running doesn’t last forever,” he wisely says. “I could drop out of school and then get injured and then I’m screwed and I’d have to go back. The safest thing to do would be to finish school. I think I’m running fast enough at this age that I can finish school and still have a tonne of time obviously to run professionally.”

Much like his choices of dream cars – the Maserati Granturismo for day to day and McLaren P1 for the weekend – the motor enthusiast is going places fast, but he also seems to have the patience and level-headedness to aid him in getting to the top in one piece.