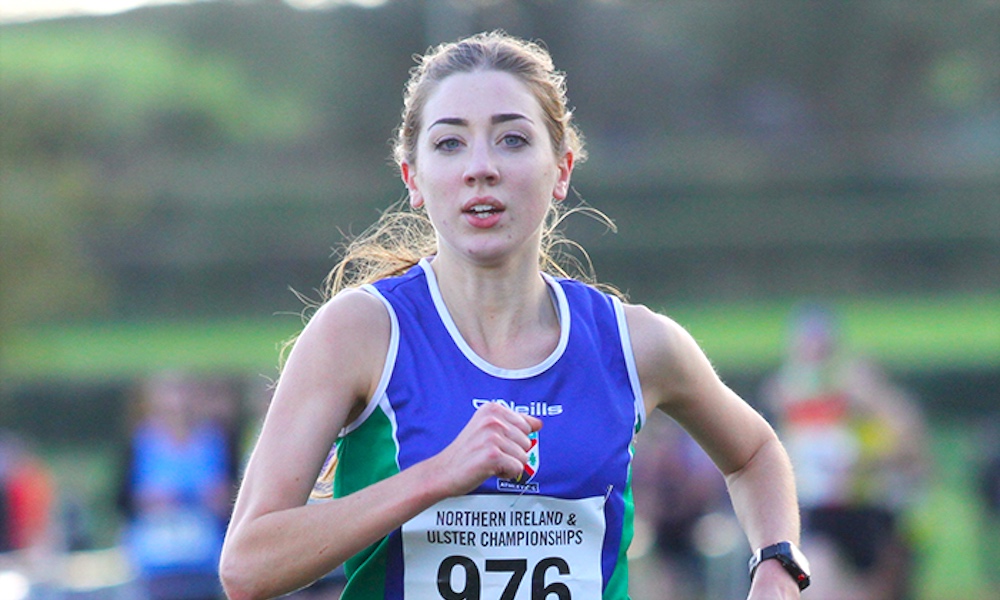 The young doctor has been making a name for herself on the Northern Ireland running scene.

She only started running seriously three years ago, but success has come fast for Sinéad Sweeney. Along with an exponential increase in her love of the sport.

From a student doctor in 2015, who felt uncomfortable even competing (indeed Sweeney didn’t even tell her parents when she was racing in those days); she has blossomed into one of Northern Ireland’s best female distance athletes. Now her parents are a common sight at races supporting Doctor Sweeney.

Originally from Creggan, just outside Randalstown, Sweeney did not intend to compete in running. Her parents and five brothers are very active in sport, but it would be fair to say that they never dreamed that one day they could watch their family member racing.

Her dad now even finds himself getting roped into the odd training run, however, she reckons that her newly discovered competitive streak definitely comes from her mum. Sweeney went to study in Manchester for a year and a means of meeting new friends, she joined the university cross country club. Suddenly she discovered that in training sessions, not only was she keeping up, but even passing other more experienced team mates. It began to dawn on her that she was actually good at this sport and had great natural endurance.

Sweeney kept up her running when she returned to Belfast and joined Queen’s University Athletics Club. She linked up with her coach, Eamonn Christie, a man who was to prove pivotal in her development; not only in training, but in generating the confidence that she needed in order to succeed.

Just how successful this partnership has been was perfectly illustrated at the 2018 Bobby Rea cross country race at Greenmount, where Sweeney put on a dominant front running display to win convincingly.

She is vocal in her appreciation for her coach.

“He is always there when needed, happy to be a bag carrier, knowledgeable, supportive and encouraging,” she says. “Importantly, he makes training fit in around my work and social schedule. He also suggests target races and I then see what I can fit in.”

Now she enjoys an active life so much, that it is a struggle to get her to rest and taper before big races! Working as a junior doctor, running has also become an important destresser.

She enjoys training in a group, but ends up more often running solo. Her job also makes it difficult to keep meals regular and balanced, but Sweeney knows this is vital and works hard at it.

Interestingly, she prefers the 5k distance, and her personal best currently stands at 17:25. But she thrives in cross country, the surface and terrain suiting her natural endurance.

Her favourite race to date was this year’s Spar Craic 10k in Belfast during her final year at university. Not so much due to placing or time. She had been struggling juggling her running with exams and had not been getting the race results she expected. But something clicked in this race and she felt strong again.

At the recent 2018 Seeley Cup 10k, Sweeney ran a superb PB of 35:42. She saw the time on her watch, and in typical fashion, put it down to an error! Confirmed officially, this ranks as her highest achievement to date.

In terms of training, Sweeney operates off relatively low mileage with three quality sessions per week. She puts her recent improvements down to consistency in training and again, credits her coach.

“Eamonn keeps my training simple and manages to motivate me in times of self-doubt,” she adds. Refreshingly honest.

Now she has graduated from Queen’s University, Sweeney will find herself much sought after by mainstream clubs in Northern Ireland. Whichever club she competes for going forward she will no doubt greatly strengthen their squad.

When considering how young her running career is, Sweeney will hopefully continue to improve for years to come. And maybe on the journey, she will find it increasingly easy to believe the words of her coach… and the times displayed on her watch!