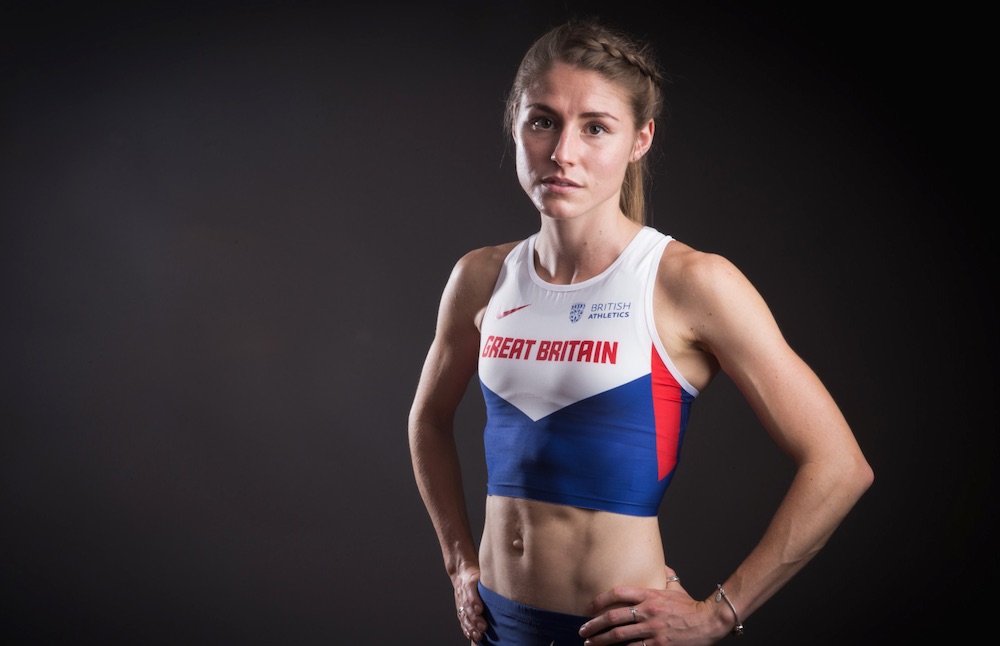 In the space of two years, British athlete Rosie Clarke has had a meteoric rise through the steeplechase ranks, reaching the height of British national champion in 2016, and then securing World Championship qualification in May of this year.

The 25-year-old’s move from 1500m and subsequent hard work has paid off as she now gets ready to compete at her first major championships.

We caught up with the British athlete this week and talked about the upcoming World Championships in London, switching to the steeplechase, training, the next generation, and a lot more.

The World Championships in London will be your first major championships, how are you feeling?

I am so excited to be competing at the World Championships in London and proud of how far I’ve come in the last two years. As with any race, you can only do your best.

Going back to how it all started, how did you get into athletics and was there any big influencers?

I am a long-standing member of Epsom & Ewell Harriers, but as a teenager, I was only really interested in training for the high jump! It was when I started studying at the University of Bath that I began dabbling on the track. I have been incredibly lucky with the wonderful people I have met at every stage of my athletic career, my closest friends and my partner, John Bird, have all come into my life through running.

My Mum always brought me up to believe that I could pursue whatever career I wanted, so long as I was willing to work hard! It is this ethos, combined with the support of my friends and family, that enabled me to take my running to the next level.

Having spent time competing at 1500m, what prompted the move to the 3000m steeplechase?

In all honesty, I kind of fell into racing the 1500m. It was the chosen distance of the majority of my friends, I was new to the sport so track racing any distance was exciting, and I was seeing great improvements as my training progressed.

From day one the 3000m steeplechase had grabbed my interest, but if I was going to give it a go, I was only willing to do it properly. Moving to Loughborough in 2015, my coach David Harmer provided me with the perfect training setup for the new hurdling challenge, and I just went for it!

Building on that, was the adjustment to a new track event difficult?

I think adjusting to the new event was exciting more than anything, but as with every new venture, it was not without its challenges.

David is meticulous in his approach to coaching, and taking on the steeplechase gave us two clear areas of focus; technical hurdle training, and my endurance. That first winter was tough, but as soon as it came to racing on the track I felt like I’d found my event. This past winter was still hard work, but it was great to see how much progress we had made in the 12-months.

The athletes at the top level of steeplechase have tended to move from middle-distance running, do you think this will always be the way?

Naturally, I know my own path to the event best, and personally, I think some of the strongest attributes in my steeplechase racing stem from what I learned from racing middle-distance on the flat. It seems to me that a lot of young athletes have success in the steeplechase at the junior distances, but then really struggle to transition through to the full 3000m.

I don’t know what the answer to this problem is, but whether people are stepping up from the 1500m flat, or the 2000m steeplechase they are facing the same endurance challenge. It would be great to develop a pathway through which to develop younger steeplechasers, and if given the opportunity I’d love to help with a project like that.

In 2016, you had your big breakthrough becoming British national champion, did things change for you after this?

The 2016 season was a very steep learning curve for me, and being crowned British Champion was certainly the highlight of my summer. It was a very proud moment for myself and my team.

It helped me realise how much I want to succeed in this event, and made me excited to see where my efforts take me! 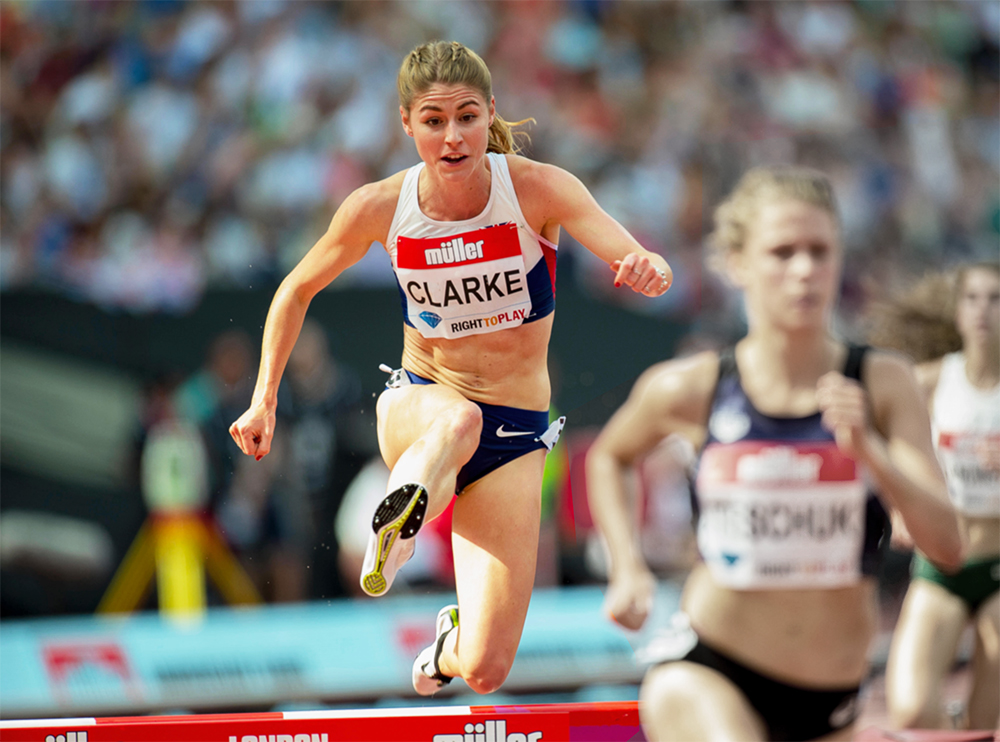 Unfortunately this year you were unable to defend your British title due to injury. Athletes in the past have found the impact the steeplechase places on the body tough. Does this play on your mind?

The steeplechase takes a lot out of my body. I have never finished a flat race feeling as spent as I do after a round with the thirty-five barriers! Missing the British Championships this year was a huge disappointment, but it is something I have had to deal with and I will be back in Birmingham next summer.

I am constantly learning about how my body deals with the stress that the steeplechase places on it, but I don’t view this as a negative. It is a developmental process, and with every little setback, we alter the plan to ensure the same mistakes are not made again. An injury is somewhat inevitable when you are training at the level that all international athletes are, but I think it is how you learn from and respond to setbacks that really matters.

You’ve trained at altitude in America, and are currently in Font Romeu, France going through final preparations for the World Championships. How do you find training at altitude in the ‘skinny air’?

I started incorporating altitude training into my regime back in the winter of 2015. Since then I have completed six separate stints in the ‘skinny air’. I am in no way scientifically inclined, but I can safely say that I always come back from a four-week stint in the mountains feeling really fit.

Some athletes live at high elevation year-round, for me, it is a case of travelling the globe and making the most of the time I have up high. Like all aspects of training altitude is tailored to the athlete, but now that David and I understand what works well for me it has become an integral part of our program.

You also spent a year at college in America, what role has this played in your athletics journey so far?

I studied at Iona College (NY) for 2014-2015 and had the most amazing year. It was whilst at Iona that I qualified for my first international team at the European Indoor Championships (Prague) over 1500m.

Before heading to America I had only really raced locally and had done very little outside of my comfort-zone. My year in the states really helped me develop as both an athlete and an individual. I have a lot to thank Iona College for, and would really recommend the NCAA system to athletes who are considering a move across the pond.

At 25 years old you still have many great years ahead of you. Looking at the next generation, who do you see as future British stars of track and field?

The British 1500m scene has completely exploded in the last 12 months. So many men and women are running incredibly fast times, and it is brilliant to witness. The two individuals that I think people should lookout for both compete over the 1500m.

Josh Kerr, who is based at the University of New Mexico in the USA has achieved fantastic success already in 2017 by winning both the indoor (mile) and outdoor (1500m) NCAA titles. He has a racing brain and is really exciting to watch compete.

On the women’s side, Sarah McDonald has improved an impressive 18-seconds over the past 18-months, and she seems set to continue that trend! She is a fantastic championship performer, having reached the final of both international championships she has qualified for to date.

Both Josh and Sarah are competing for Great Britain at the World Championships in London, and I can’t wait to see what they achieve this summer and beyond.

So, once you have the small task of the World Championships out of the way, what’s your plans and goals?

After the World Championships, I am looking forward to some exciting racing opportunities! Having had to sit-out much of the early season through injury I am feeling fresh and ready to compete.

Hopefully, I will get to take my legs for a spin over a variety of distances, as well as a couple of late season steeplechases.

Unfinished business in London for Gregan