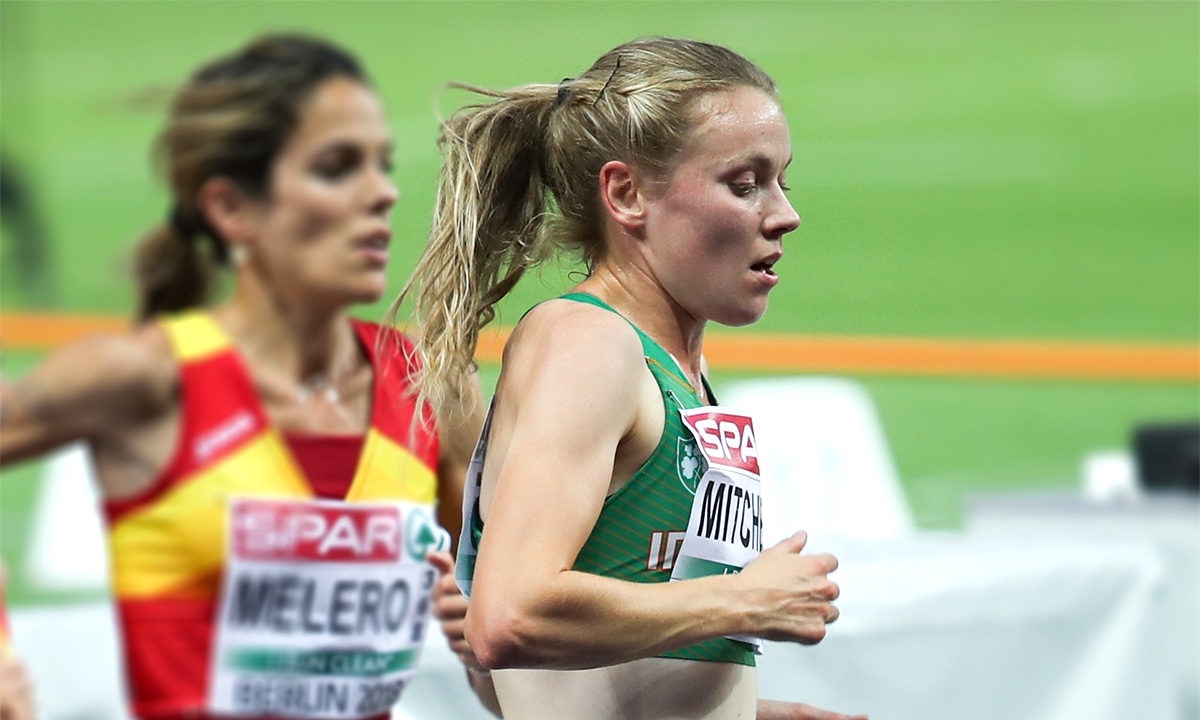 The championship performer is aiming to transfer her glittering track form to the marathon.

After record breaking performances on the track, Emma Mitchell has become a household in Northern Ireland and across the island of Ireland.

Now she’s set her sights on mastering the classic distance race – the marathon – and intends to make her debut next April in London.

The Queen’s University Belfast (QUB) AC athlete has already tasted road success after making a superb half marathon debut at this year’s Great North Run. Mitchell was the first athlete from the UK home when she ran a superb 74:38 on the streets of Newcastle and Gateshead.

That was just one of many impressive performances the 25 year-old managed to achieve while juggling her final degree year studies at Stranmillis College, Queen’s University Belfast.

She also ran world class races at two major championships for Northern Ireland and Ireland, alongside a plethora of domestic success since the beginning of 2017.

The Eamonn Christie coached athlete has now been rewarded for her hard work, revealing she has signed a sponsorship deal with Nike through Nic Bideau’s Melbourne Track Club.

Bideau, of course, is the husband to Irish legend Sonia O’Sullivan and also the coach of Sinead Diver, who recently ran the second fastest time ever by an Irish-born female marathoner.

Mitchell’s deal with Nike couldn’t have come at a better time after spending the last few months struggling to understand why her undoubted talent and success wasn’t being recognised in a meaningful way.

She explains: “Given the year I’ve had it’s been disappointing to not receive any support all summer from Queen’s University, and most definitely a disappointing way to end my time representing QUB.

“I suppose every Elite Athlete Programme has its flaws. While I was fortunate to receive financial contribution towards the World University Games, I’ve had nothing from QUB this last six months, apart from the use of the gym.

“I feel I played my part in bringing success to the university and Queen’s Sport.”

The Health, Physical Activity and Sport BSc student broke the Northern Ireland 10,000m record twice in a matter of months, the latter being her 32:49.91 PB at the Gold Coast Commonwealth Games.

She also ran the 5000m in the same championships, before pulling on the Ireland vest at the recent European Championships in Berlin. Mitchell has made a habit of breaking national records along the way, earning her 5000m PB at a BMC meet last summer when she ran a lightning fast 15:50.55.

Incredibly, all of those lifetime best performances came off the back of a six month injury layoff. Clearly a determined athlete, she worked hard to maintain fitness, taking to the pool to aqua jog and the gym to work on strengthening weaknesses.

Her results speak for themselves, placing her firmly in the top tier of Northern Ireland’s brightest prospects.

National 1500m and 5000m titles and two strong performances at the World University Games last year were followed up in 2018 with more track success.

She started the year off with gold at the Irish University Championships 3000m before cementing her position as a potential global medallist with another 1500m title at the Northern Ireland Championships.

While competing all over the world in the last 12 months, she has still managed to earn a first class honours degree and the 9:04 3000m athlete is grateful to her Stranmillis lecturers’ support during her three years there.

“They all worked with me to accommodate my racing schedule, often meaning changing the date of exams and hand-in dates,” she explains. “This made life as a student-athlete very enjoyable and stress-free.

“I’ll be graduating in December instead of the summer as I had to defer handing in my dissertation due to the Commonwealth Games.

“I’m looking into a potential Masters degree, but I’m not in any rush just yet. Instead, I’m enjoying being a full-time athlete for the first time in my life!”

What’s next for the girl who made her name on the track once she’s done with the 26.2m challenge?

“We may target the 10,000m at the World Championships in Doha, as they’re late in the summer, allowing for adequate recovery after the marathon,” she explains. “I’ll aim to get the qualifying standard at the Highgate Harriers Night of the 10,000m PBs in July.

“I do plan to race another half marathon before April but have no plans set as yet. Between now and then it’ll be marathon training and some races here and there.”

Mitchell’s running most definitely does the talking when it comes to attracting press coverage.

How does she feel about how much attention athletes from the Emerald Isle receive in the British and international media?

“I’m very lucky that Eamonn has great relationships with the press in Northern Ireland, with Nigel Ringland and John Haughey from BBC Sport and Malcolm McCausland from the Irish News to name a few covering athletics here,” she reveals.

“You guys are doing a great job of promoting Northern Irish, Irish and British athletes performances too!”

Fast Running will most certainly be continuing to follow this exciting talent as she aims to transfer her track speed to the roads of London next spring.

Bouncing back from a debut DNF to running a 2:19 marathon
Mick Clohisey’s Zen-like approach to running is paying dividends