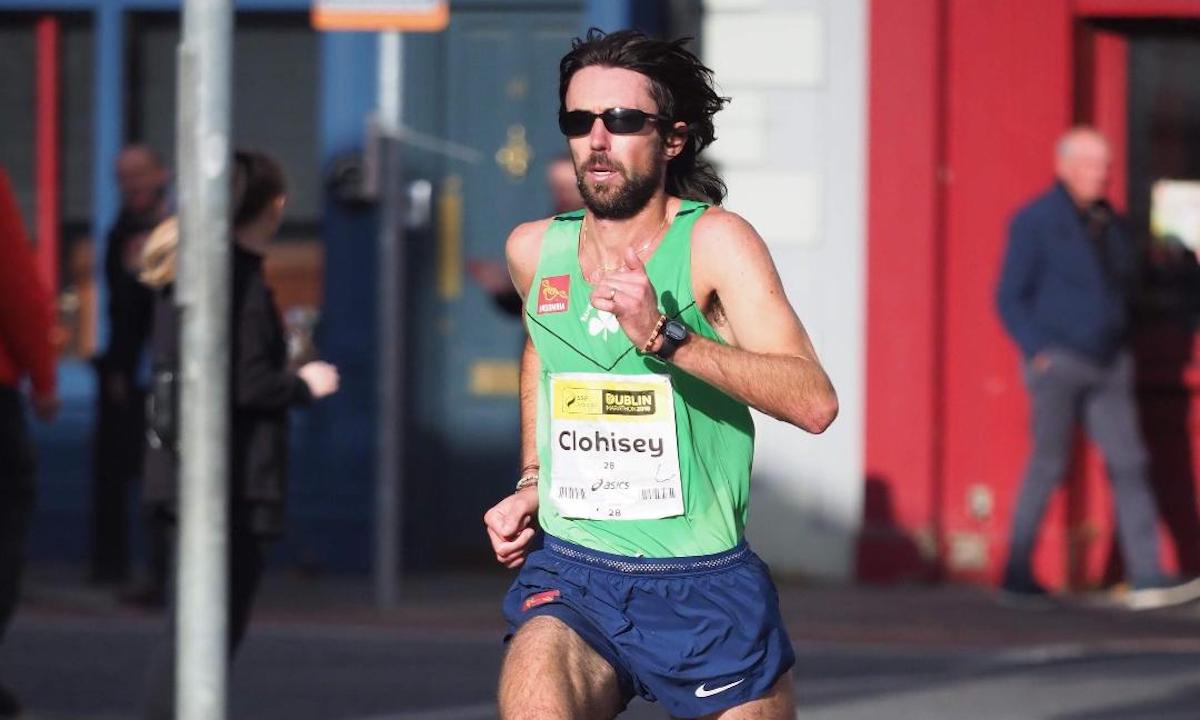 The Irish marathon champion has enjoyed arguably the most successful year of his career so far, but he’s hungry for more.

Mick Clohisey is a rare breed of runner. Excelling at every distance and terrain he races, yet remaining unfazed by the enormity of his achievements.

It was a fitting result for the man coached by three-time champion Dick Hooper, who won the inaugural event back in 1980.

Clohisey hasn’t restricted himself to marathon racing, though. He’s an accomplished cross country runner as well as proving his speed consistently over the shorter distances.

“I moved up to the marathon in 2015 but I also like to stay in touch with the shorter distances over the road, track and cross country,” he tells Fast Running. “It helps my overall focus, and keeps me in that competitive mode.”

He has set out his stall on the international stage too. He finished a fine 18th in the European Championship marathon in Berlin, clocking 2:18 behind only one countryman – Kevin Seaward.

The 32 year-old has his sights set on next year’s World Championships marathon in Doha, with the Tokyo Olympics his long-term goal.

The qualifying period for Tokyo opens in January, but for now, the Irish star is just enjoying one of his most prolonged purple patches to look too far ahead.

His 2:15:58 result in Dublin came just two months after the European Championships. He had no doubts about running both races. “The timing hasn’t worked out in recent years, but this year I decided I didn’t want to put it off any longer,” he explains. “Once I knew I’d recovered from the Europeans I wanted to give it a crack.

“It was my first time running my home city’s marathon, so it had that extra special feeling about it. I used to watch my dad running in the event when I was quite young, so it was always one I wanted to do.

“My main aim was to be as competitive as I could up the front of the race, so I got stuck in early on. I had a few stomach issues past the half way point, but thankfully after a pit stop I got back on track and managed to reel off a good few places.

“I finished strong, it was a solid run and obviously I was delighted to get my first national marathon title. It’s the one title that I hadn’t got and really wanted.”

The other titles Clohisey alludes to includes national cross country honours. He was last crowned Irish cross champion in 2015, and this weekend (November 25) he will have another crack in Abbotstown.

“The nationals are definitely a goal,” he agrees. “Although it will be a different experience coming into it so soon after a marathon, I hope to get stuck in and give it a good lash.”

‘Giving it a good lash’ is an approach that is certainly paying off for Clohisey. He kicked off the year in style with a superb marathon PB in Seville in February, running 2:14:55 off a limited build up.

The multi-faceted athlete showed his class when he then dropped back down 10k track racing. The Highgate Harriers Night of the 10,000m PBs was up first in May, followed by the Irish Track and Field Championships.

Representing Ireland in the European Cup at Parliament Hill, Clohisey mixed it with the best on the continent with a 29:36.42 clocking. That time was just seconds away from his PB achieved at the same event two years earlier.

He proved his class once again with a silver medal at the Irish T&F championships in July, finishing runner-up to Stephen Scullion in an even quicker 29:34.89.

Elements to Clohisey’s success – consistency and taking time out

Consistent training and the right attitude have helped him succeed. Intriguingly though, he admits an injury layoff and time out from the sport have also played their part. “I’ve really given running my full focus over the last few years following a break from the sport in my twenties,” he explains.

That ‘break from the sport’ he mentions expanded over three years, although he continued to train, just not compete.

Clohisey had enjoyed a successful junior career including several outings in the Ireland vest, but chose to take time out when he was 24 to travel the world.

He came back just as strong, though, qualifying to run for Ireland in his first year back in 2013 after finishing sixth in the national cross country championships.

Although the Rio Olympian has not managed to escape the sidelines completely – he had a month out from competing following a hip flexor injury – he concedes he has been fortunate.

“I’ve been lucky to be able to train consistently with very few injury layoffs,” he admits. “It’s been a natural progression generally with my training and racing as a result of that.”

“Along with having the hunger and desire to get the most out of myself, the pure gift of running has helped too,” he reveals. “I just enjoy its simplicity and the sense of freedom it brings.

“I like to have a Zen-like approach to it. I let things happen naturally, and don’t get too wrapped up in it.

“This means being able to switch off totally without disregarding it as I may have done in the past. Thankfully my interests in other things like art and music help this side of things.”

The aforementioned Dick has clearly played an integral part in Clohisey’s impressive racing CV too.

“He has been a big part of my running career since my mid-teens,” he reveals. “He’s a three-time Olympian and had a remarkable marathon career, so I’ve learned a lot from him.

“We’re both members of Raheny Shamrock, so have a strong connection to the area as we’re both locals. We’ve got to know each other quite well over the years and have a strong friendship. We’re very different personalities, but that works very well.

“Dick and I respect each other’s views, and, as far as coaching goes, it’s a two-way system. The pair of us sit down regularly and chat through the plans for the next block of training. We run things by each other regularly.”

National and international achievements both important to Clohisey

That local connection has helped the Irishman stay close to this roots, reminding him to respect national titles as much as international vests. “Obviously representing Ireland at the major championships is always a great honour,” he says. “I always want to put in a great performance when I pull on the Irish kit.

“But national titles have always been a big thing for me too. Winning the national cross country titles meant a lot to me. The national marathon medal was a special satisfaction, particularly given the history of the title to my club.”

Living and training in Dublin has proved a boon for his own burgeoning coaching career too. Clohisey now makes a living through online coaching (find him on Facebook and Instagram under ‘Mick Clohisey Running’).

In addition, he also invests time coaching local runners of all abilities in the city.

“I try to create a fun and relaxed atmosphere for people in my morning and evening group sessions,” he reveals. “They’re getting some decent training in too. I really enjoy helping every runner, regardless of ability.

“I love seeing people improve and get enjoyment out of the sport. The coaching allows me great flexibility to work around my own training. I think I have a good balance between the two.”

His consistency and increasing public profile – helping to promote events such as the recent midnight SPAR Cork Airport Runway 5k – have enabled him to attract crucial support and sponsorship.

“Athletics Ireland has given me discretionary funding over the last few years,” he says. “The Dublin Marathon Mission (set up in 2009 to supporting Ireland’s leading marathon runners) has been a massive support.

“I also receive sponsorship from Insomnia Coffee, which is a great help.”

It comes as no surprise that he has been nominated for the Endurance Athlete of the Year award at the forthcoming Irish Life Health National Athletics Awards: “I’m delighted to be nominated along with some other strong athletes, it’s always nice to be nominated!”

The imminent challenge of the national cross championships is the priority for Clohisey in the short term. The marathon remains his main goal, however.

“I feel I can make more breakthroughs in 2019, and would like to bring my times down in the marathon,” he admits. “There is a lot more progress to be made. I want to run a fast marathon next spring, particularly as the Olympic qualification window opens in January. A lot will be geared towards that.

“However, I’ll still be competing over the shorter distances as I think it all helps. I love to race regularly!”

That much is clear looking at his racing record from this year alone. Alongside those three marathons, track races and cross country he’s been prolific over every distance he’s tackled.

Last month he won the Tinryland 4M in 19:11, and in September he ran a fast 64:40 at the Charleville International Half Marathon in Co Cork.

A month earlier he took the title at the Claregalway 10k in 30:27, and just two months after his marathon PB he won the Sonia O’Sullivan Cobh 10M in April in a classy 49:23.

After arguably the most successful year of his career so far, 2019 is shaping up to be an exciting prospect for one of Ireland’s brightest running talents.