Mark McKinstry believes in keeping a healthy perspective in running 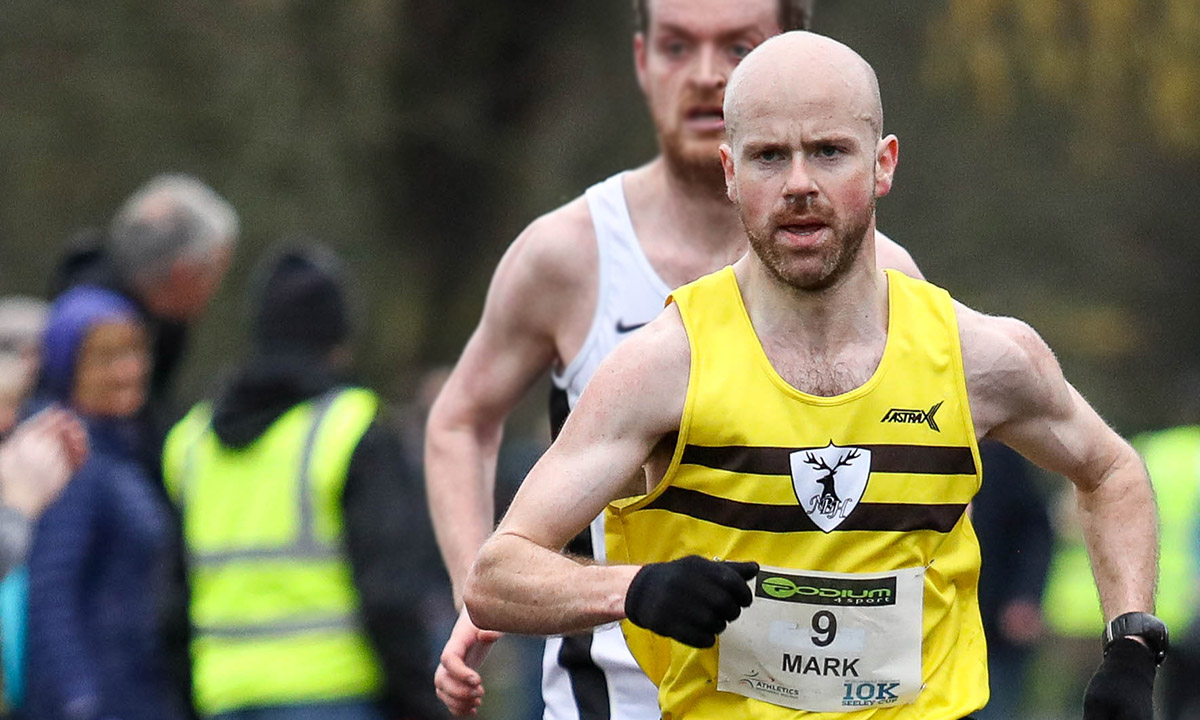 North Belfast’s top veteran international has come a long way in a short time, but he’s simply thankful to be able to run and enjoy the sport he loves.

The V35 ace won the 8k blue-chip event by 30 seconds from arguably more established internationals Phil Matthews and Alastair Watson, leaving many spectators unfamiliar with his success story to ask – who is this new kid on the block?

As McKinstry acknowledges, on paper his rivals’ recent road and track bests outshone his own relatively novice achievements.

“The thing with cross country is that road and track times don’t always correlate with form over the country,” he counters. “I’ve always tended to punch above my weight at cross country compared to the road or track.

“I probably have more strength than speed. Because I have short legs I find my running style seems to suit the grass and mud. Alastair is top notch and I would be envious of his track times this year. Phil Matthews is a top runner too and a 30 minute 10k road man. With the previous champion Michael Harty there too I knew it was a good field.”

McKinstry had spent the previous six months targeting the championships, since turning 35 in May, but while he knew he had a shot at a medal his victory was a surprise even to him.

“Although I knew from my training and local cross country victories in the lead up to it I was in good shape, I genuinely didn’t expect to win by a big margin,” he concedes. “I actually told my team manager Norman Bissett the day before the race I was going to go out conservatively in the first few laps!

“However, half way through the first lap when we got to the first hilly section I pushed the pace on just as a tester. Before I knew it I had opened up a gap.

“I do a fair bit of hilly running in training, so the course probably suited me too as it was a bit like a fell-type course. I was able to keep the pace fast for the first few laps, so I just had to hold on as best I could until the end. The support around the course was fantastic. It was a great feeling to cross the line and realise I’d won a medal for Northern Ireland!” Winning gold on his first veteran international outing is something McKinstry will savour for some time to come.

“It was only at the presentation dinner that evening that it sunk in – I thought the N.I. team were going to bring the roof down when I got called up to get my medal,” he says happily. ”It was Norman’s last year as team manager too, so it was nice to help him go out on a high!”

When asked about his thoughts on the often controversial topic of age categorisation in masters athletics, he admits his relative newbie status has affected his attitude considerably.

“I personally don’t mind it being 35, but I can see why others think it should still be 40,” he says democratically. “I only took up running properly when I was 29 when I joined a running club to run a marathon and lose weight, so maybe I don’t have the same outlook as I’m still relatively new to the sport. I wasn’t even sporty at school!”

The 30:36 10k man is optimistic about his prospects in the veteran ranks, but is also mindful of the fact that many older athletes are still regularly trumping their younger rivals.

“There are local veteran runners over 40 running phenomenal times, so age isn’t necessarily a limiting barrier to compete at a high level,” he says assuredly. “A thing I like about being in the vets now is it opens up more doors of opportunity in regards to individual competitions and championships to aim for.”

Balancing training with work and family

A shoe repairer by trade, he works part time to enable him to care for his elderly mother as well.

Training has to – and does – fit around his other commitments, but the Northern Irishman is clearly a veritable jack of all trades, so arguably is used to turning his hand to ever changing situations.

“I’ve been a bit of a journeyman in regards to jobs, working as a farm labourer, car salesman, hardware shop salesman and a warehouse/despatch worker,” he explains. “I’ve changed my training set up to fit in around work, so generally run alone now, which I don’t mind as I’m a loner by nature.

“I used to train in a group run by my coach, Gregory Walsh, called Fit N Running, which is in my home town of Ballymena (Fit N Running is affiliated with North Belfast Harriers).

“Gregory continues to coach me but just via email instead. He’s very good, he’s into the science of running and takes a long-term approach to training, which works for me.” Although the loneliness of the long distance runner may be challenging at times, he appreciated the training support of fellow Northern Ireland masters international, John Craig, in the lead up to the championships.

“We were doing similar sessions, so we met in the middle for some of them,” he explains. ”A training partner certainly helps for those very tough sessions. I do have a few other training partners I link up with when I can.”

The sense of appreciativeness for his life as one of Northern Ireland’s top runners is palpable when he talks about his life on the Emerald Isle.

“I’m lucky to live in the countryside in a rural area called Glenwherry, Co Antrim,” he enthuses. “I have Ballyboley Forest a stone’s throw away, so I run in there a fair bit.

“Go with the flow and enjoy it. To be able to just go out the door and run no matter how fast or slow is a gift. We should never take it for granted.”

McKinstry applies that same healthy balanced philosophy to his easy running miles too, taking to the trails as often as possible to ease the strain.

“Most of the 80-90 miles a week I do in the winter – including sessions – will be off-road on either grass or trail,” he reveals. “I’m a great believer in doing most of my easy mileage off-road, on playing fields or forest parks.

“I think it’s the main reason I don’t get many injuries. Humans were born to run, but they weren’t born to run on concrete in my opinion.

“I do more road and track sessions in the spring and summer, though.”

Those two to three weekly sessions consist of a standard mixture of longer intervals, tempo runs or longer steady outings. If he’s not racing the Saturday session will be something different like hill reps, shorter, intense intervals or a fartlek.

Sunday long runs range from 90 to 120 minutes, with the rest of the week made up of easy doubles or single runs if racing, with rest days too necessary.

“I try to keep my easy days easy and not run too hard – it’s best to save that for the sessions,” he says sensibly. “I do take a three week break from running in the summer too which I find helps me.

“However, the key to progression is consistency, week in, week out, rather than any individual sessions. That’s why I think it’s best to be patient and view your running long term as a work in progress.”

That progress he alludes to has been an impressive rise to the cream of the current Irish crop of cross country stars in a handful of years, at a time in life when many athletes are slowing down.

“Race highlights so far have included winning the Ards Half Marathon in 2016, which was the Northern Ireland championship race that year,” he enthuses. ”I’m also proud to have won the Larne Half Marathon in 2017, together with the Ballymena Fairhill 5 twice, particularly because the latter is my home race.

“I have also had plenty of bad races over the years too though!”

Running and racing isn’t just a physical challenge to be overcome for the North Belfast man though.

“I find running good for me mentally,” he adds. “Although I can’t always see myself competing in years to come, I’d never give up just going out to run to keep fit and clear my head.”

Athletics in Northern Ireland and the future

Commenting on how athletics in Northern Ireland is progressing, McKinstry is positive about the future of the sport in his home land.

“Although we may lack the strength in depth that used to be there years ago, I think there are still a fair few talented local runners out there,” he says. “It would be good to see more come through in the years to come and reach their potential.

“We are a small nation but the talent is there. I respect any local runners who do well, but the ones I personally find inspirational are more the good old school athletes like Paul Rowan, Deon McNeilly or Dermot Donnelly.

“There are too many to mention who have ran at a good level and are humble, though.”

What aims does the fast-improving veteran have for 2019, aside from continuing to keep the sport in a healthy perspective?

“The main title that has eluded me so far has been the N.I. Senior Cross Country Championships,” he reveals. ”I’ve finished as the runner up four years in a row, so hopefully I can go one better this season!

“I am also hoping to get selected for the Northern Ireland team at the IAAF International XC at Dundonald. With it being on home soil and also incorporating the Home Countries race, I’d like to try and have a good run there.

“I may possibly do the Armagh International 5k in February as well.

“My club, North Belfast Harriers, have a strong tradition of targeting some of the bigger races outside of Northern Ireland, as well as chasing individual titles. We always have things on the horizon to target as a team and a club.

“Other than that, I just want to try and continue to improve my race times in general.”

It is quite something to be still improving at the impressively rapid rate that McKinstry is at the age of 35. Age clearly is just a number, as long as the easy runs are kept easy, off-road training is a key component of the weekly miles and a balance is maintained with running and the rest of life’s demands.