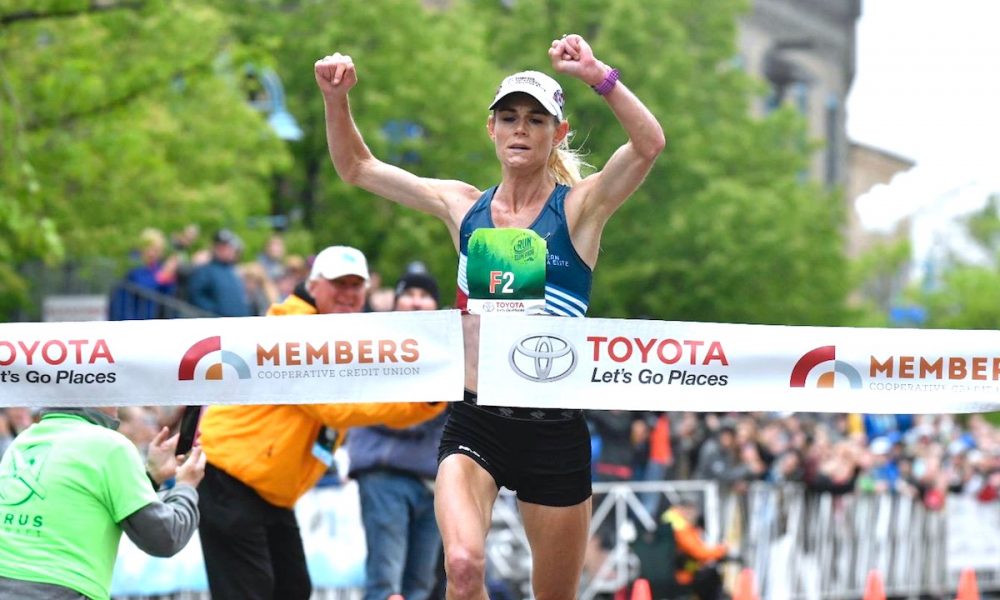 The American’s fantastic 2:24 run at the Grandma’s Marathon sees her storm to seventh on the U.S. women’s all-time list. She chats about her performance, training before the race, and women’s marathoning.

Kellyn Taylor was one of the many esteemed American and international athletes who fell victim to the wind and freezing rain at the Boston Marathon in April. Heading into the Patriot Day race she had her sights on having another crack at bettering her 2:28:40 best set in Houston in 2015, but that goal was cruelly curtailed by unforgiving conditions and instead hypothermia set in and she dropped out around the halfway mark.

Boston wasn’t the first time the 31 year-old Ben Rosario coached runner faced hardship over 26.2 miles. Two years ago she had to withdraw from the New York City Marathon in the build-up due to fatigue. A year later London was a happier story, but still, it wasn’t jubilation, as she agonisingly missed her fastest time by only 11 seconds.

Something changed after the tough experience in Boston. The 4:33.40 miler reassessed things and 61 days later toed the marathon start line once again for the 42nd Grandma’s marathon in Duluth, Minnesota. What transpired on June 16 was the performance she knew she could deliver, but one which had evaded her in the past – a huge performance well under 2:25.

Looking up at the clock afterwards and seeing 2:24:28, Taylor could now proudly call herself the seventh fastest American woman in history.

Away from the marathon, Taylor, who trains in Flagstaff, Arizona, with the Hoka One One Northern-Arizona Elite (Naz Elite) group, certainly has an admirable duel career on the horizon, and is currently completing her studies to become a firefighter. However, the fires may have to wait a bit longer as the mother of one’s marathon career is on the way up.

Fast Running spoke to the inspirational athlete about her run at Grandma’s Marathon, training, motherhood, and U.S. women’s marathoning.

Fast Running: Congratulations on running a fantastic 2:24:28 at Grandma’s marathon. Could you tell us about the race?

Kellyn Taylor: Thank you! Coach Ben [Rosario] and I had discussed a pace between 5:32 and 5:42, due to the rolling nature of the course.

The main point being to not focus too much on each individual split because it could vary from one mile to the next. The race started and we got out a little quick, 5:28, but that really isn’t anything new to me. I tend to always start fast and generally settle into a pace once things get rolling. A clear pack of five or six elite women and a couple of men immediately formed.

I don’t usually take splits during my races but for this one I decided to. A big mental switch that I had going into this race was to treat it more like a workout than a race. For a lot of people this may seem puzzling but to me it made sense. I am kind of a workout warrior and not always so much in a race.

I split every mile and each mile was much like the one before, fast. Most of our miles were sub 5:30. This was a little alarming because it was far from the set pace we had discussed before the race. We rolled through the half in 72:30, about 30 seconds to a minute faster than I had originally planned. Mile 13 was also our slowest mile, by far, 5:58.

I guess I didn’t notice the slowdown but when we hit that mile and I saw the split I was out of there.

I rolled through mile 14 in 5:26 and in doing so I dropped most of the pack. One guy was ahead of me by a few seconds and he dropped back stating that he didn’t want to run by himself and I smiled and said back “good, I don’t want to either”.

We worked together, running side by side for the next five miles or so until he dropped back a bit. I focused on how I was feeling more than I did the splits. My body felt strong. Water stations were somewhat hectic, I missed/couldn’t find four of nine bottles, but with it not being hot I avoided disaster.

I would say nothing remarkable happened during the race. Honestly, I just kept pressing and when I finished I felt like I could’ve gone longer. I closed the second half in 71:59, running 2:24:28. FR: Did you feel you could run such a fast time on the start line or did it go better than expected?

KT: The game plan was to win, PR and set the course record. I feel like I have been in 2:26 shape before, but honestly, I was unsure of my current marathon fitness. My buildup was condensed with lower mileage and less marathon specific work than normal.

I felt 100% ready going into Boston but that was eight weeks ago. How would the work put in there translate into this next marathon? Uncertain but confident, if that even makes sense.

Running a course record would have been a 2+ min PR. Running a 4+ min PR definitely exceeded my goals…and I NEVER exceed my goals because I like to set big goals. I was so pleasantly surprised to see the clock when I rolled through the finish.

FR: Boston was a tough experience for everyone. Was there anything you took from that day that helped you this weekend? Was that race DNF a blessing in disguise?

KT: With every race I run, I learn something. It’s always the silver lining. Going into this race, I knew that no matter what, I was going to finish. I could’ve broken my leg and I would’ve hobbled across the line.

The biggest thing was proving to myself that I’m not a quitter and that I can rise above an unfortunate circumstance. I also wanted to show my daughter that even though things don’t always go your way it doesn’t mean that they have to stay that way. You have the opportunity to rise above any circumstance. It was the icing to come to Grandma’s and run as well as I did. The main thing was to get back out there.

I’m not sure we can ever know if the DNF at Boston was a blessing. Fortunately, it worked out and I am thankful for the opportunity.

fun fact….my daughter is the only person outside of my coach and agent who has been present at all of my marathons. My lucky charm🍀🍀🍀🍀❤

FR: How did your training go in the build-up?

KT: The Grandma’s training was different than anything before. After Boston, I took a week off and another week super easy. We built back slowly and incorporated shorter faster workouts instead of long marathon type workouts.

Five weeks from Grandma’s I did the first workout that I considered to be marathon specific and it did not go well. It was supposed to be a 5/4/3/2/1 cutdown and I only made it through two miles of the three-mile segment.

The next workout was a four-mile tempo where I was struggling to run a whole lot faster than 5:25 pace. Coach Ben told me to take a day off.

I took the day off and got some body work done at HYPO2. Unknown to me, my hips had been unaligned a fair amount. After the day off and the tweaks done at HYPO2 my workouts were great. I ran my fastest ever 15mi steady state run and closed my segment with a very fast 2 x 6mins.

Arguably two of the best workouts that I have ever done. The only issue I had with these workouts was that I was also running lower mileage, which I thought accounted for my extra speedy legs. I think that it is fair to say that the Boston strength was still in my legs and the speed work was all that I needed to wake them up.

FR: What is a typical week’s training like for you?

Double a few days a week (Boston, every day)

Weights once a week and massage every other week

FR: You’re a mother and studying to be a firefighter. Any tips for any other mothers to help fit training in?

KT: There really isn’t a secret. If you want something bad enough you are going to find a way to make it work. Set a goal, something that gets you excited, and go out and get it.

Going through the early mornings and busy days are not always fun but when you hit your goal it is so validating.

FR: What are your next goals?

KT: I’m not sure what’s next. I may run a fall marathon but I’m currently undecided. I want to wait and see what gets me excited before making any absolute decisions. The long-term goal is to make the Olympic team.

I think this past weekend was a big step in the right direction but I feel that I still have a lot more in me and it’s going to take all I’ve got in order to make the 2020 team. American distance running is on fire right now. Photo: Hoka One One

FR: How has the NAZ Elite set up helped you?

KT: Hoka One One NAZ Elite has been a vital part of my career. All of my marathons and most of my biggest successes have been under Coach Ben. His passion for the team is undeniable and it is seen in all that he does.

Jen, Ben’s wife is one of the driving forces of the team. She works tirelessly to fine tune most of the behind the scenes work. This team and the people in it are so special. Not only are all of my teammates incredibly talented runners, but they are incredible people as well.

It’s special to have people working towards the same goal as you, competing against you, but yet still rooting for you at the same time. I think that it is fair to say that we want to see each other succeed as much as we ourselves want to succeed.

The backbone of our team, Hoka One One, has provided our team with the necessary resources for us to pursue our dreams. Great product, constant innovation and receptive to their athletes…I couldn’t ask for more.

FR: Do you have a particular favourite marathon session? Any you find tougher than others?

KT: My staple is always the 15/16 miles at marathon effort steady state. We usually do this 3 or 4 weeks out from the marathon. I feel it is the most accurate tell of marathon fitness.

FR: U.S. women’s marathoning has boomed in recent years, with the likes of Shalane Flanagan and Des Linden winning big city marathons. Why do you think we’re seeing these results now – just like yours?

KT: Greatness elevates others to be great. I think seeing those amazing women succeed helps to make the rest of us see that it really is possible.

There is no better time to be a female American distance runner. I truly think that the marathon team in 2020 will be one of the hardest teams to make.

FR: What’s your favourite Hoka shoe and why?

KT: The Clifton is an everyday shoe I can wear on any surface and use at any pace. I raced in them prior to the Tracer (racing flat).

FR: How did you celebrate your great performance? Or is it just straight back to the grind?

KT: Just enjoy time off. I am in Wisconsin with family for the month. There’s the luxury to relax, go out, eat junk two or three meals/day… really do whatever I want.

You have to look forward to breaks post marathon, especially when the race goes well.