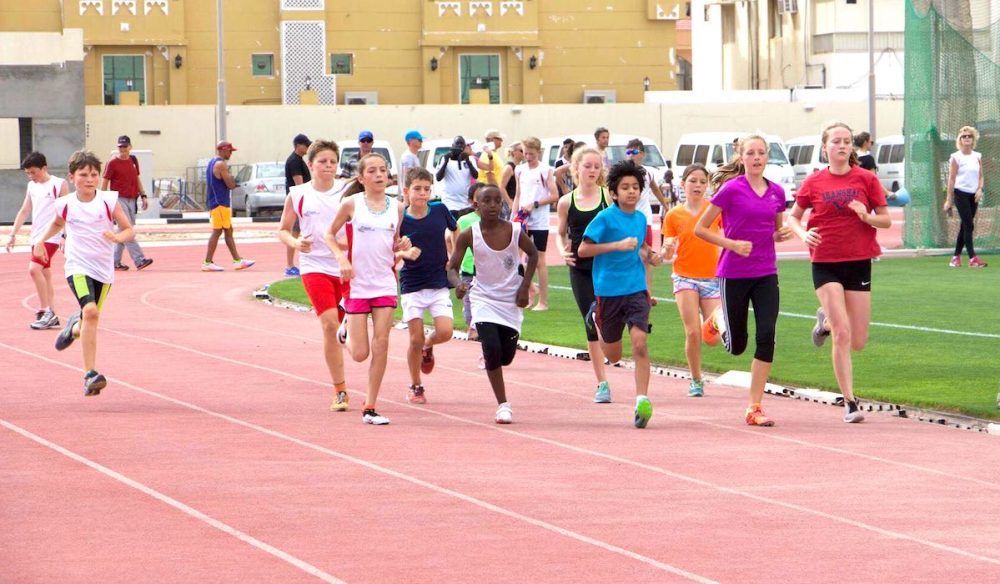 Set up almost four years ago Liz McColgan and John Nuttall’s Doha Athletics Club has grown year on year and there are no signs of it slowing down.

Doha will soon be in the international sporting spotlight with World Championships next year and the football World Cup in 2022, but away from the foundations of new stadiums all over the city, the team of McColgan and Nuttall are continuing to break their own new ground.

Not just for aspiring young athletes, the Doha Athletics Club is a unique venture for all children of any nationality and ability to participate in sport. From teaching athletics fundamentals across the various track and field events – to creating an environment for children to get active and socialise – the club formed in 2014 has positively affected the lives of many young children in the Qatari capital.

After years of work what has been built is truly impressive, with over 60 young athletes under their coaching wings in the athletics club. As well as that, the husband and wife team also provide adults with coaching and manage a running club.

A walk into the unknown

Success was no guarantee, and the former world 10,000m champion McColgan admits she was “going into no man’s land” when she moved her life to the hot Doha climate.

“The reason I moved to Doha was to join my husband, John who was the head coach of ASPIRE Academy for Sports Excellence at the time,” she explains. “I didn’t really know anything about sport in Doha or Qatar, or what was in place or not.

“After making the move, I decided to go to a few schools and speak about athletics and sport. It became very apparent that there wasn’t a lot of opportunities for boys and girls to take part in athletics.

“So my natural response was ‘let’s get a group together and coach’. I started with four or five girls and it has just grown from there.

“Now our approach is to go into local schools and present what we do. We introduce them to athletics and tell them how they can join up. I would say about 80% of our children are never going to be athletes per se, but the main aim is to get the kids active and promote a healthy lifestyle.

“It’s great to give the school children the opportunity to learn about athletics, the different disciplines. It also helps the children develop socially because they are mixing with other children who enjoy sports.” 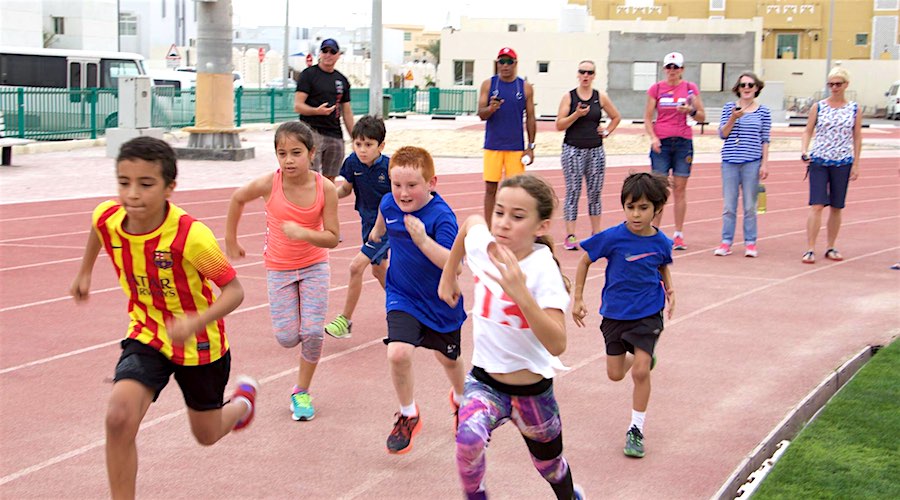 The club was the first in the region to be dedicated solely to athletics and still the only one that caters both to women and international children, as well as children and adults born in the region.

Challenges that were faced

When undertaking the ambitious plans to create an environment to promote athletics and running to children and adults alike, McColgan has faced two main challenges – the weather and facilities.

“The weather is the biggest challenge, it can be so hot and humid,” she says. “Also it can be difficult to find and get use of facilities that can accommodate everything we want to do – that’s always a challenge.”

“There are sports facilities but they mostly cater to football and swimming. There aren’t separate track facilities like back in the UK.

“Year by year though we are building our network and getting to know more people who can help us get access to more suitable facilities.

“It’s just about continuing to build those partnerships that will help the project move forward.”

As well as over 60 children, the addition of the adults bring the clubs numbers close to 100. The adult group come together for a range of reasons.

“For the adults, we have sessions later in the evening and we get a lot of triathletes,” she explains. “It’s a very popular sport here and they come along for the running aspect of the training.

“Then we also have those who take part to improve their health, lose a bit of weight and get fit. It’s a good mix of everything really.”

While the purpose of the athletics club is not to unearth the next Olympic stars, there have been a few notable successes.

“We have been fortunate and found some real talent within the group including the fastest U16 French sprinter, one of the fastest U16 Australian sprinters and a couple of fast girls from the UK,” she says proudly. “For us, this is great because it allows us to get our coaching heads on.

“We can actually help to develop these kids who can hopefully go on to represent their countries when they get that bit older.

“They all work incredibly hard especially when you consider how difficult it can be to run out here when it hits 45 degrees outside.” 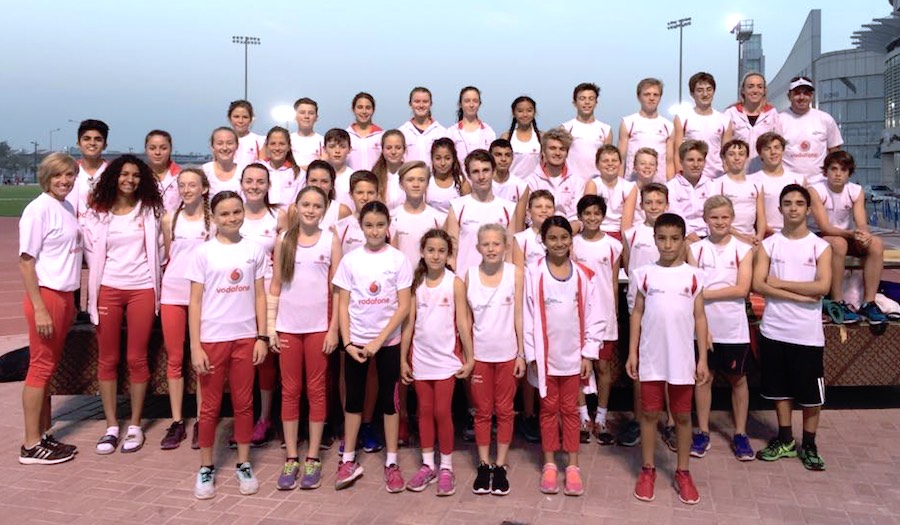 Finding events for these young aspiring athletes to compete in can be very difficult and in the past international travel to a competition was the only way. However, even this is now a challenge as a result of the economic blockade in the Gulf region.

“For myself and John, one of our main tasks at the moment is working to provide competition here in Doha itself,” McColgan says. “We are hoping to be able to accomplish some of this in 2018, and not just for our club but for everyone who likes to run in Doha.”

While the activities of the Doha Athletics Club occupy most of their time, they do still time find time for coaching those athletes closest to them, including Eilish McColgan, Hannah Nutall and Gemma Steel.

“John and I work together on coaching, so anyone we are involved with, we both write the programmes,” she says. “It helps to have someone to bounce things off and not just one voice, and John’s had input into Eilish’s programme now as well.

“Eilish had a great 2017 and its been a long time coming. Now over the major injuries, her training has been really consistent and she is now just showing what level of an athlete she is.

“I think there is still a lot more there to come and she is a great place at the moment and hopefully over the next few years Hannah will develop as well.

“It’s also great to be involved again with Gemma. She’s running really well and is a great girl. She’s such a talented runner and it’s great to see her going in the right direction once more.”

The start to 2018 certainly bodes well for all their coached athletes, with 20-year-old (H)Nuttall setting a new 3000m PB indoors in Sheffield. While (E)McColgan set another PB to win the Doha 10k for the second year in a row and Steel finished second in the half marathon on the same day.

Likewise, the athletics club shows no signs of slowing down, with a new partnership with the Doha English Speaking School seeing the introduction of weekly after-school athletics classes for children of all abilities.

So with everything that has been accomplished, is McColgan enjoying the new life forged in Doha?

“I wouldn’t be here if I wasn’t enjoying it,” she says. “From where we started, to what we have built, has been really impressive. We have worked hard up to this point but it has been very rewarding and fun too.

“The enjoyment the kids get and the support from the parents has created a really great atmosphere within the club. And it’s just great to be apart of it.”