Lauren Howarth is balancing medicine with athletics and a wedding 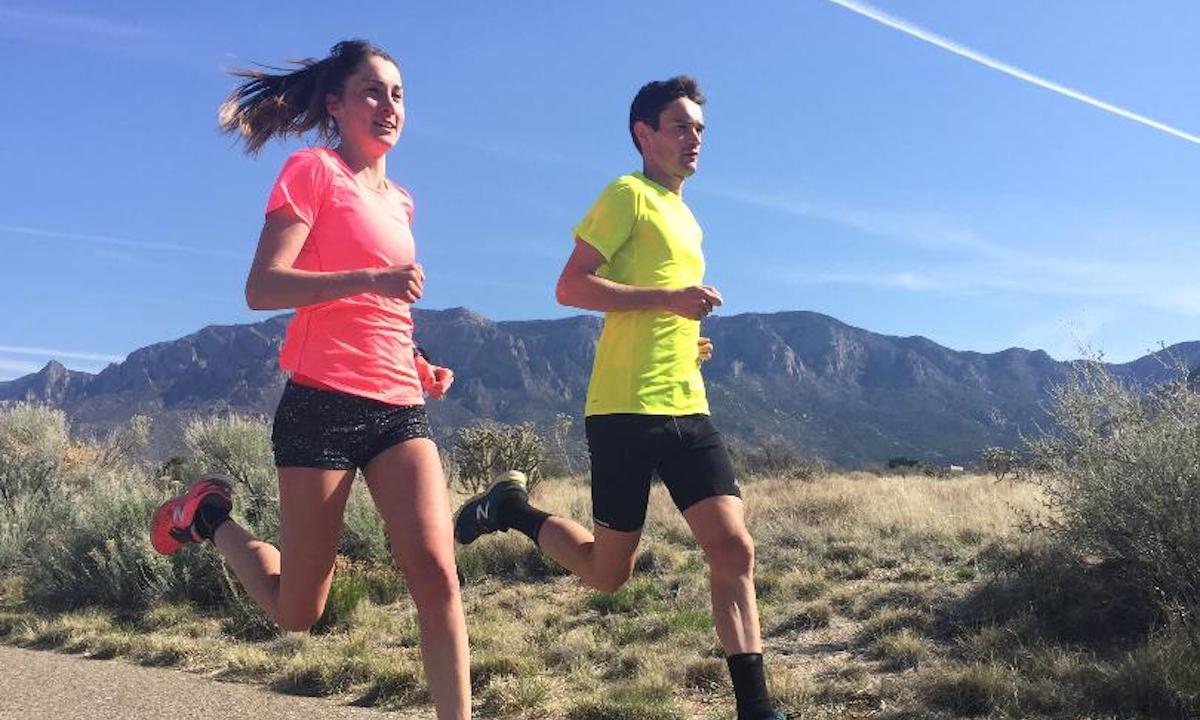 The Leigh Harrier juggles full-time medicine with running but finding a balance hasn’t been an easy road.

Lauren Howarth recently stormed to victory at the Manchester half marathon, slicing nearly two minutes off her best to run 74:16. Howarth’s triumph was all the more impressive because she didn’t train specifically for the distance.

The 28 year-old locum doctor decided to race the half in support of her future sister in law, who has been diagnosed with bowel cancer. She admits her body is struggling to recover from her efforts in Manchester, but has no regrets.

“The half marathon was a bit of a last minute decision so I didn’t do any extra training,” Howarth tells Fast Running. “If anything I held back, as I was doing it for charity, so needed to make sure I made the start line because of previous injury problems.

“I loved it though, despite the Manchester rain! The atmosphere was great. I had no expectations, so just went out there and enjoyed it.  My dad planned his Sunday run so he could see me at four points on the course, and my mum joined him on the bike.

“Unfortunately I’ve picked up a few niggles post-race, but fingers crossed nothing too serious. That was to be expected though.” The former Team New Balance Manchester (TNBMCR) athlete says she’d love to step up to the marathon “one day”.

“It’ll be in a few year’s time though, hopefully after starting a family – no pressure Andrew!” she jokes.

The Andrew she is referring to is Hallamshire Harriers’ 13:47 ace Andrew Heyes, who she is set to marry in December. Heyes has been helping his future wife with her training, alongside her dad, John Howarth, since she left the TNBMCR set up in March.

Running most definitely – and appropriately – runs in the family

Both her sisters run at a high standard. Older sister Becky is a 17:11 5k athlete and younger sister Abigail has run 16:45 for the same distance.

“I’m looking forward to training with Abi as she’s just moved back to the North West after completing her Foundation Dentistry year,” she adds, highlighting what a talented family the Howarths are!

“We’d love to go to the Mansfield cross country relays as a team of sisters! I’m sure Becky will plan a trip home from Florida where she works as an actuary one year to coincide!”

What a formidable thought! It was Lauren’s dad who first took her down to the club when she was 10 years-old. He is still an actively competitive member of Leigh Harriers and Northern Masters, as is her grandad, Derek Howarth, now a V85.

Alongside being an obvious talent and source of support, her grandad also holds the British over-75 five mile road record. As if that wasn’t enough, there is a stand named after him at Leigh Harriers!

“My grandad has achieved so much in running in the masters events,” she says. “He’s an inspiration, and often reminds me he’s my number one fan!”

Howarth has also achieved impressive feats on the country, track and roads, including representing GB at the World and European Cross Country Championships on multiple occasions.

This year has been a difficult one though for the girl from Greater Manchester.

In March she decided to leave TNBMCR following, in her words, “yet another serious injury”.

Howarth has been plagued with stress fractures since 2009. She sustained the last one while running in the snow in February. Conceding her unhealthily low body weight caused her to develop osteopenia (the low bone density condition that preempts osteoporosis), she has a stark warning to other athletes.

“When I was underweight I was ignorant of the longer term effects,” she reveals.  “Unfortunately there wasn’t as much knowledge available then as there is now.

“Multiple people did try to help me, but I was blinded by my running success. It didn’t help that I would just bounce back from injuries.”

Howarth is clear in her mind that things need to change if other athletes are to avoid the issues she’s experienced.

Issues in running with under-fuelling

“There is a major issue in running,” she states. “You still see female – and male – athletes clearly under-fuelling but achieving success. It isn’t sustainable though, yet people become blinded by their performances.

“We still see athletes make sharp jumps in standard, race very well for a period of time, and then disappear for months due to injury. Some are selected for competitions and don’t even make the start line. I’m still suffering the physical and psychological effects of being stuck in that cycle when I was a younger athlete.

“I really think there could be a place for help and support when it comes to athletes who are clearly struggling, but are still being selected for GB teams.

“Sadly, if an athlete is running well they will often not be thinking about the longer term consequences. It’s not always obvious though.

“I’ve heard a few people mention the idea of non-selection if an athlete is clearly struggling with RED-S (Relative Energy Deficiency in Sport). This would be very difficult to implement and would need a lot of input and a support structure.

“I know if I was pulled from an event as a junior athlete it would be very upsetting. However, it may have given me the prompt to make changes much earlier. It’s tough, but it could save careers.”

Howarth was a tiny 41.5kg at her lowest. Shockingly, she was put on the contraceptive pill to enforce periods that her body couldn’t produce naturally.

Joining TNBMCR in 2015 while she was midway through her medical degree foundation years helped her achieve a healthier rhythm. However, the time was right to leave following that metatarsal fracture in February.

“I loved my two years there and learned a hell of a lot from Steve (Vernon, head coach and former international athlete), but the set up just wasn’t for me,” she explains.

“I struggled with being a ‘professional athlete’ and was reluctant to quit my job. We have a mortgage, bills, a wedding, and everyday life things to pay for. I also wasn’t quite at the level to earn money. Andrew and I aren’t contracted, but got coaching, medical and physio support included. We also got altitude and warm weather trips, and kit of course.”

Howarth is grateful to still get New Balance kit drops – “every time is like Christmas” – and remains good friends with Steve and TNBMCR, while Andrew is still a member of the team.

Her health is a bigger priority now though than ever before

While she now has regular periods, is at a healthy weight and a recent DEXA scan revealed significantly improved bone density – it is now in the ‘normal’ range – she says her “bone architecture is likely lagging behind and will take years of remodelling”.

“But I’m happy, healthy, and enjoying running,” she adds. “I eat more than I ever have done. Living with someone who is doing 100-mile weeks means there’s always a lot of food around the house!”

Happily, positives are beginning to emerge from the negatives experienced by athletes like Howarth regarding under-fuelling in elite sport.

FitrWoman and TrainBrave are just two examples of movements aiming to address those issues.

Athletics and medicine – not an easy juggling act

Howarth would love to be involved in promoting the work carried out by movements such as FitrWoman. For now, she is understandably too busy working, preparing for her wedding and training.

“I currently work Monday to Friday 9-5, but I’m in the process of applying to reduce that to three days a week, to start in November,” she says. “This will give me more flexibility to train, spend time with family and concentrate on the wedding.

“After August 2020 I’d like to go into medical speciality training. This might be either GP or core medical training. That means night shifts and weekend work again.

“I lot of people say I’ve done very well to balance a medical career with running at a high level.

“However, I’d say my health was severely neglected during medical school. Although I’ve achieved a lot, I have not managed it at all well. I’ve had more than eight stress injuries, poor bone density and anxiety.”

As if constant injuries and weight issues weren’t enough worry to contend with, her job adds another level of stress.

How does the Leigh Harrier deal with the pressures of life while trying to compete at a high level as best she can?

“Often I forget that what sets my job apart from many others is that fact that I’m dealing with people’s health and lives,” she reflects. “I can’t afford to make mistakes and get a lot of anxiety around my job. I worry a lot about the patients, especially over the weekend.

“I’m learning to deal with this better now – working more regularly helps with this, and I’m currently doing a bit of resilience training. Writing things down and reflecting helps too. I make a lot of to-do lists, have a structure to my day and like to keep busy.

“Scheduling in naps or chill time can be part of the daily plan where possible. A glass of red wine in the evening helps to unwind too!

“We’re so lucky to live in the countryside and would love to make more use of the fantastic walking routes. However, after training and working it’s often nice just to sit in the garden and look out on to Kinder Scout.”

For now, her and Andrew’s forthcoming nuptials are taking up most of her spare time, along with helping support his sister Jenny. The mother of three daughters aged seven, four and one was diagnosed with stage 4 bowel cancer in June. That Manchester half win helped boost the family’s Just Giving page, which is raising funds for Bowel Cancer UK.

“Jenny is such an amazing person and role model, so the Manchester half provided the perfect opportunity to do something to support the family,” she concludes.

Understandably the irrepressibly positive running doctor can’t wait for their December wedding day, and the chance to relax as a family after a difficult year.

“Yes, we are both hoping for a crisp winter’s morning after the pre-Christmas cross country season,” she enthuses. “Although I do hope to race on the country soon, my body is taking a bit longer to recover from the half than I hoped, so if you don’t see me on a start line any time soon don’t be too surprised!”