Kate Avery will be fighting for medals in Stirling 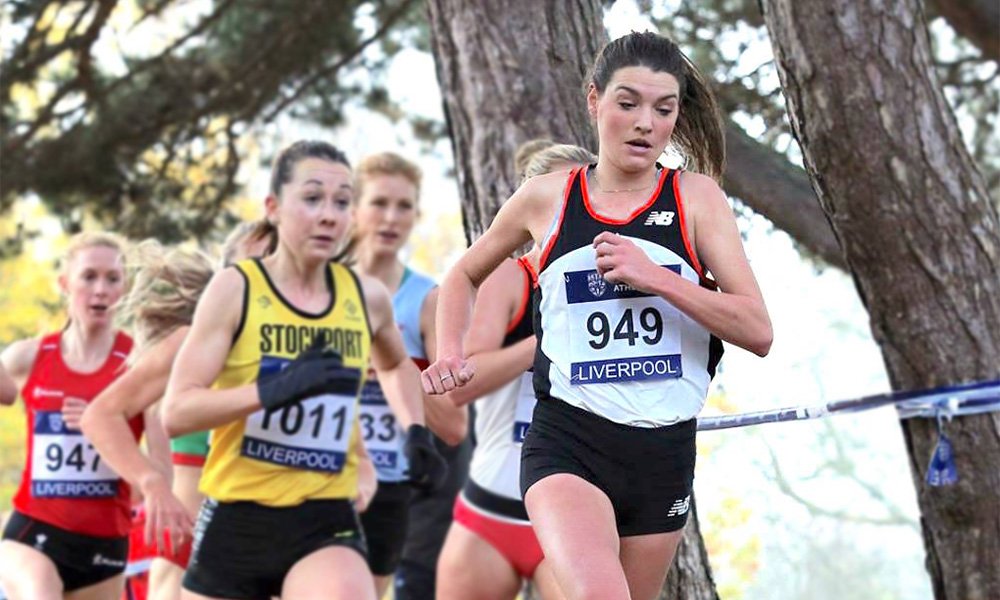 The British endurance star discusses her impressive comeback and aspirations for the coming months.

Kate Avery will line up at the Great Stirling XCountry this Saturday (January 12) as one of the favourites following an impressive return to form.

Avery spent 17 months on the sidelines after sustaining a number of injuries that first began back in June 2016. She only returned to the cut and thrust of the cross country racing circuit in November 2017.

Frustratingly for the experienced international, she was first struck down with injury having just run a superb 15:39.35 at the Road to Rio 5000m in Sligo, Ireland, her second fastest time ever for the distance.

No wonder then, that Avery is now raring to go at this weekend’s international in Scotland.

Stirling will host the famous fixture for the first time this year after organisers were forced to move the event from its long term home at Edinburgh’s Holyrood Park following the decision by the City of Edinburgh Council to withdraw its financial backing.

Avery will line up in the GB team alongside Charlotte Arter, Jess Piasecki, Pippa Woolven and Verity Ockenden to face top cross country teams from the USA and Europe.

Her selection for the event came after her first outing in the GB vest since winning the Great Edinburgh XCountry nearly three years ago, at December’s European Cross Country Championships in Tilburg.

Avery finished 15th on the waterlogged, sand-based Danish course, and, despite not performing at her best due to a head cold in the lead up to the championships, she loved the race terrain and was proud to be made team captain for the senior women’s team.

“I really enjoyed the Tilburg course, it was different and you had to concentrate on every single step,” she tells Fast Running. “I was also just happy to be back running for GB!”

Nevertheless, she earned herself a team silver medal to add to her now groaning collection of silverware from international championships over the years. Ten years ago the then 17 year-old made her GB debut at the junior European Championships, winning a 3000m silver medal at her first attempt.

Earlier that year the talented youngster finished 25th at the World Cross Country Championships U20 race. She went onto earn a bronze medal at the European equivalent that December.

The following year Avery picked up five more places at the World Cross, with numerous top 10 international performances to come until she became the 2013 U23 European Championships silver medallist, this time over 5000m.

Perhaps driven by the inevitable boost to her competitive nature from competing regularly on the American collegiate athletics circuit by then, she stormed to a superb fourth place at the 2014 Commonwealth Games 10,000m.

Spurred on by her breathtaking performance on the world stage, four months later she became the first ever Brit to win the NCAA Div 1 Cross Country Championships, followed by individual silver at that year’s European Cross, a feat she repeated in 2015.

That year also saw Avery run herself into the top 10 on the all-time UK rankings when she ran a fantastic 31:41.44 at the Payton Jordan Invitational 10,000m, a time since bettered only by the now retired Jess Martin, albeit at the 2016 Olympics!

That long line of consistently brilliant race results, year after year, only made the ensuing year and a half out of competition all the more difficult to deal with for the Shildon athlete.

“I first sustained an injury in the summer of 2016, after that it was constant injury issues for 18 months,” she explains. “I was just so keen to run but I wasn’t educated enough about how to look after myself in and around intense training.

“In addition to that my dad passed away towards the end of 2015, which made it harder to cope, and I started to have medical issues to deal with as well. It was like a snowball effect, one thing after another.

“Before I started getting injured I never understood athletes who said they began their comeback to running with one minute on, one minute off jogging! It seemed such a slow and drawn out method, but now I know it’s essential to take it very steady in the early days.”

When Avery finally made her racing comeback at the Liverpool Cross Challenge in November 2017, she had only been running outside for five weeks. She may have ‘only’ finished 16th, but to achieve even that after such a torrid time out on the sidelines was impressive.

It was her cross country season that really allowed Avery to shine, though, a radiant rocket in the claggy British mud. She kicked off her winter season with a second place at the Cardiff Cross Challenge, followed by a win at the Milton Keynes event. A fifth place at Liverpool ensured she’d done enough to earn her first GB vest since January 2016.

Her full time athlete lifestyle has allowed her to move from her family home in County Durham to the significantly flatter lands of Loughborough, aka the athlete Mecca for endurance runners in England.

However, she is quick to credit her home town club, Shildon AC, who she has been with since she first started out on her athletics journey back in 2003, for her early success.

Keen to acknowledge the crucial part the North Eastern club played in her early development she adds: “It was a great group set up for me as a child, it was very well organised right up until my late teens.”

Now residing in the significantly more central county of Leicestershire, she is well connected for training partners and spoilt for choice in terms of facilities at the town’s renowned athletics campus.

“It’s great living here because I rarely have to run on my own,” she says with a smile. “However, clearly we all have our own individual goals and schedules, so we have to sometimes work around that to enable us to share sessions.”

One particular athlete Avery is very happy to be training with whenever possible is fellow GB comeback star, Jess Piasecki.

RELATED: Jess Piasecki is back on form with a strong message for athletes

“I trained with Jess on the track before Christmas up in Durham, as her husband’s family lives near mine so it worked out well,” she reveals. “However, we then realised we could train together more often throughout the year as we’re based fairly close by in the Midlands.”

Oh to be a fly on the wall/track club house when those two rockets are speeding along together!

Avery is clearly thriving in her Loughborough training set up, which she manages to fund herself alongside much-needed (and clearly appreciated) support from her sponsors.

The 27 year-old is sponsored by New Balance, who she says have supported her throughout the good times and the bad, which have of course included that extended period out of competition.

“They are by far and away the best athletics company I’ve worked with,” she adds. “I don’t feel any pressure from them to race more than is right for me and my career, and the kit is just perfect for me.”

Avery prefers to be an independently funded athlete

The 31:41.44 10,000m athlete and multiple European Cross Country individual medallist was dropped from funding in November 2017 – the month she made her comeback from injury.

Interestingly, the softly spoken star reveals that, from personal experience of being on funding up until just over a year ago, she prefers to be financially independent of the national governing body.

“I was on funding for two years from 2015, but the system had many flaws,” she admits. “There were clearly good things about being recognised by UKA and given financial support, but I’m happier without it.

“I do think the whole system could be improved to help athletes learn about how best to look after themselves when they reach a certain level of competition though – and before then too. Nutrition-wise I have never received any help whatsoever, but I am working on that myself.”

Learning to take responsibility for training and injury prevention

While Avery is reticent about her coaching setup, she is adamant that her 15 years experience of running at a high level (she broke five minutes for 1500m when an U13) has given her a great understanding about how her body responds to training. “I may not have my coach by my side at track sessions or on long runs, but I know by now to take responsibility for my training whenever possible,” she explains. “I recognise when I need to pull out of a session if it’s not going to plan, or take unscheduled days off to allow my body to recover.”

Now free to choose who she goes to for physiotherapy and massage, Avery is adamant that, whatever happens, she will never entrust anyone else other than renowned  physio ‘to the athletics stars’ Mark Buckingham for her prehab and rehab treatment going forward.

“It’s one of my biggest regrets, having to go to a different physio when I was funded,” she reveals. “It wasn’t right for me and it didn’t work. Mark is just brilliant!”

Following on from a year in 2018 which saw the two time World Cross Country Championships competitor record a 1500m PB of 4:15.42, what are her aims for the year to come after Stirling?

“I will race the Belfast Cross Challenge the following weekend, and definitely the Inter-Counties in March,” she reveals. “I would also love the opportunity to race the World Cross again, but at the moment the official UKA selection policy is stating only the top two at the Inter-Counties will be taken automatically.

“I have my theories about that, but I just hope they allow a full senior women’s team to go to Denmark. Beyond that, I haven’t planned all my races, but I am looking forward to a decent track season.”

Whether that includes this autumn’s World Athletics Championships in Doha, Qatar, is still an unknown for Avery.

The fact that the championships have had to be pushed back from August to September and October due to the country’s intense heat may well have an impact on many athletes’ decision to compete during a period that a significant number choose to rest to prepare for the impending cross country season.

However, perhaps Avery’s answer to the question ‘if you had to choose between cross country and track which would it be?’ gives a hint as to whether she’s aiming to compete on the global track stage this year.

“I would always choose track if I had to do one or the other,” she adds. “It’s just such a great atmosphere to race in.”

Considering she ranks as the ninth fastest all time for 10,000m in the UK – and still has many racing years ahead – her impressive return all points to a very rosy future in endurance running once again.