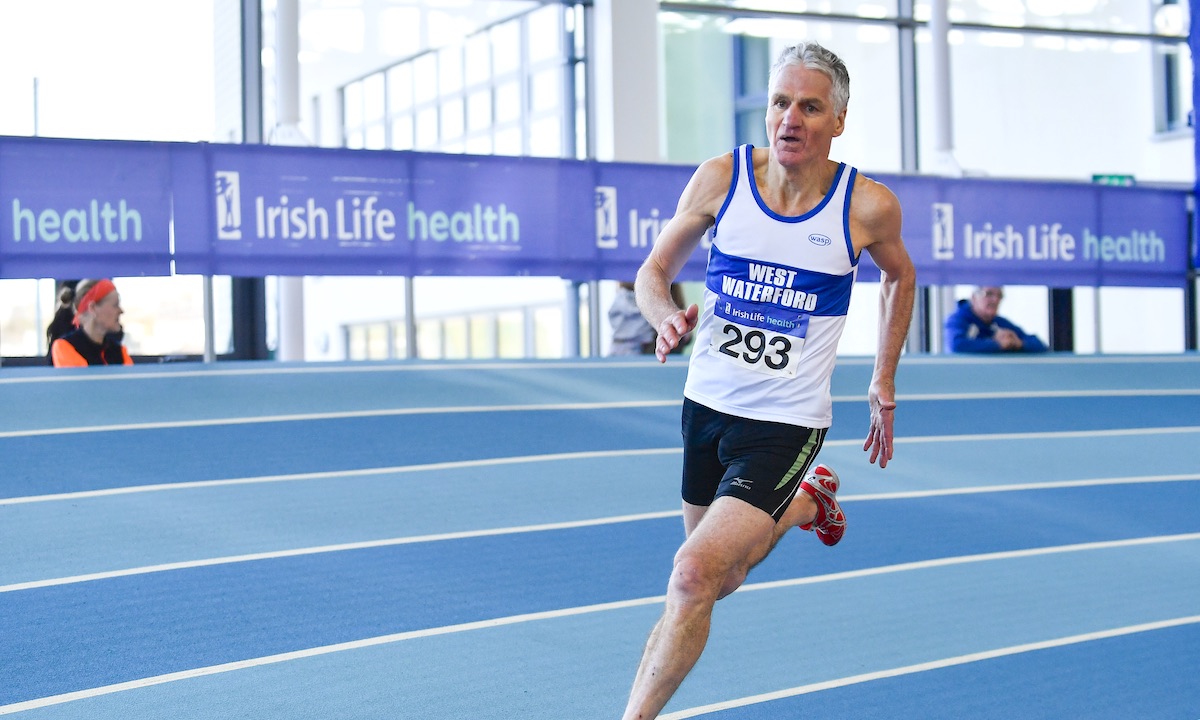 The multiple time European and world champion chats about his glittering career as a masters athlete, training and how he stays motivated.

After an unforgettable year of record breaking performances and gold medals, Irish runner Joe Gough is looking forward to many more years at the top of masters athletics.

Gough’s highlights in 2018 included winning double O65 middle-distance gold at the World Masters Athletic Championships in Malaga. In his preferred event, the 800m, he ran 2:16.37 to set a new European record, while in the 1500m he won his first world medal at the longer distance.

His achievements were duly noted, and in January, as well celebrating his 66th birthday, the European Masters Association awarded the West Waterford AC athlete with the honour of European Middle Distance Athlete of the year.

Cliona Foley spoke with Gough – at the announcement of Irish Life Health as an official partner to Athletics Ireland – to find out more about his career as a masters athlete.

Fast Running: Congratulations on winning the European Masters Distance Running Athlete of the Year award recently and being nominated for the same award at World Masters. Were you surprised?

Joe Gough: To be honest I didn’t even know there was such an award! I was only informed two weeks ago. The presentation will be at the European Outdoors in Venice next September where I’ll be competing.

Apparently as one of the continental winners you are also put forward for the World Masters Awards. Awards are not why you do the sport but of course they mean something.

It’s always nice to be acknowledged and also I feel it’s recognition for the Irish family of Masters Athletics which is a vast number of people, one of the biggest memberships in Athletics Ireland.

FR: Sum up your 2018. Did you achieve everything you had set to do?

JG: I broke an O65 world record in Dublin in March, the first world record on the indoor track in Abbotstown. I’d also broken the World O60 record in Athlone IT track in 2014 so it’s been nice to set two world records in two Irish stadia.

I’d won the 800m at World Championships before but never the 1500m. I took a decision to train for it and put it out there that I was going for gold in the 1500m, which was a big challenge because I’m not really a 1500m runner.

They were the two highlights and winning European Masters Athlete of the Year in Middle Distance was another.

FR: What is your biggest challenge as a masters athlete?

JG: Probably to keep the motivation going. If you’re winning that helps! Being challenged helps too, they’re out to get me and that’s good.

I’ll be beaten on days and I’ll train harder and come back. That’s what brings you on. It’s never static which is great.

Staying focussed is the big thing. I plan every week and try to stick to that. I retired from work a year ago and it helps because I can probably recuperate now a bit better, but my training hasn’t changed that much. I couldn’t train any harder.

FR: How competitive is masters athletics?

JG: It’s very competitive right now. There are new people coming into it from other sports and they’re coming in fresh and really motivated so you have to be ready all the time.

There’s a fantastic buzz in it and of course it is social. I will make friends along the way but that’s not my purpose.

When you train hard and compete hard and are up on the podium, there’s no greater buzz. For me it’s always performance first.

FR: Which nations are your biggest rivals?

JG: All the big countries you’d expect really. America, Britain and Germany are all strong and masters runners are coming in bigger numbers from Kenya now.

I spoke to the Kenyan team in Malaga and they said they get $10,000 dollars for every gold medal they bring home. And they are also financed – their entry, transport and accommodation are paid for.

This year Americans making the first six in World Masters were also guaranteed $3000 for transport and accommodation from their federation and Germany does similar.

We have lagged behind and Ireland could market its Masters Athletics much better, it’s so vast now and constantly growing.

JG: Always three quality sessions, either on track or hill sprints. The other days I do a tempo run (quality as well) and strength and conditioning and I always do one long run every Sunday, about 10 miles. It’s easy to run 10 miles ‘easy’.

You do 10x100m on the track, that’s a lot harder. My long runs are done in the woods or on grass.

It’s all hills around me and Portlaw is just across the river. I live on Owning Hill. a lovely spot. My neighbour is the horse trainer Joseph O’Brien, Aidan’s son. We both use the same hill for our gallops!

My last choice for training always is the road. There’s wear and tear anyway but when I see concrete my body wilts! A mile on the grass is a mile you can do again tomorrow.

I always train with someone who is younger and better than me which brings me on and they’re also learning from me. I do a lot of bounding and plyometrics before my track sessions.

That’s works for me, keeps the fast-twitch fibres primed. I still have my basic Casio watch and can easily judge my own heart-rate so I don’t have any of those fancy monitors. I’d probably only lose one.

FR: You came back to running at 35. With your ongoing success in masters athletics, what advice would you have given your 16-year-old self now?

JG: Get a good coach. I had talent but I was one of those athletes who was always second; second to Eamonn Coghlan and second to Jerry Kiernan. I remember coming second to Eamonn in Dublin, him going off to Villanova then and me back to Waterford. At the time there wasn’t a great coaching structure in Ireland with a few exceptions.

Now there are good coaches out there and there’s no excuse. Today I train twice as hard as I did then. I’m still slowing down but the focus is there.

Dick Murphy is my coach. I might only see him once every two months but I don’t think I’d have achieved what I have if I was self-coached. You tend to do foolish things on your own. Dick spots things I’m not even aware of.

FR: What’s next for you?

Then I have Europeans Outdoors in Venice in September. It’s a long year but you come back down and start a second season. What I do as a master is exactly what any elite athlete does; your weights, circuits, quality sessions, sprints, hill runs, time-trials and races.

FR: What’s the key to your success?

JG: I love running just for running’s sake. There is a wildness and wilderness about it which is lovely. But, when you’re on the track, you’re there to perform and I like that.

The track is the least favourite place for athletes because you’ve nowhere to hide, unlike a mass road race. The track is a lonely place so you have to be completely prepared for it and that’s always my thing.

There are times when I’m not motivated and I’ll say “why the hell am I doing this?”. But after a few hours or a day, that passes and I come back to it. I’m on a journey for myself.

Everyone can run for life, it has so many health benefits. It’s all about your own mindset; how you talk to yourself, the phrases you use. There are European and world records for people over 100 years of age so I’ve got 35 years left!

Joe Gough was speaking at the announcement of Irish Life Health as an official partner to Athletics Ireland, backing a sport that delivers on health, wellness and lifelong activity.