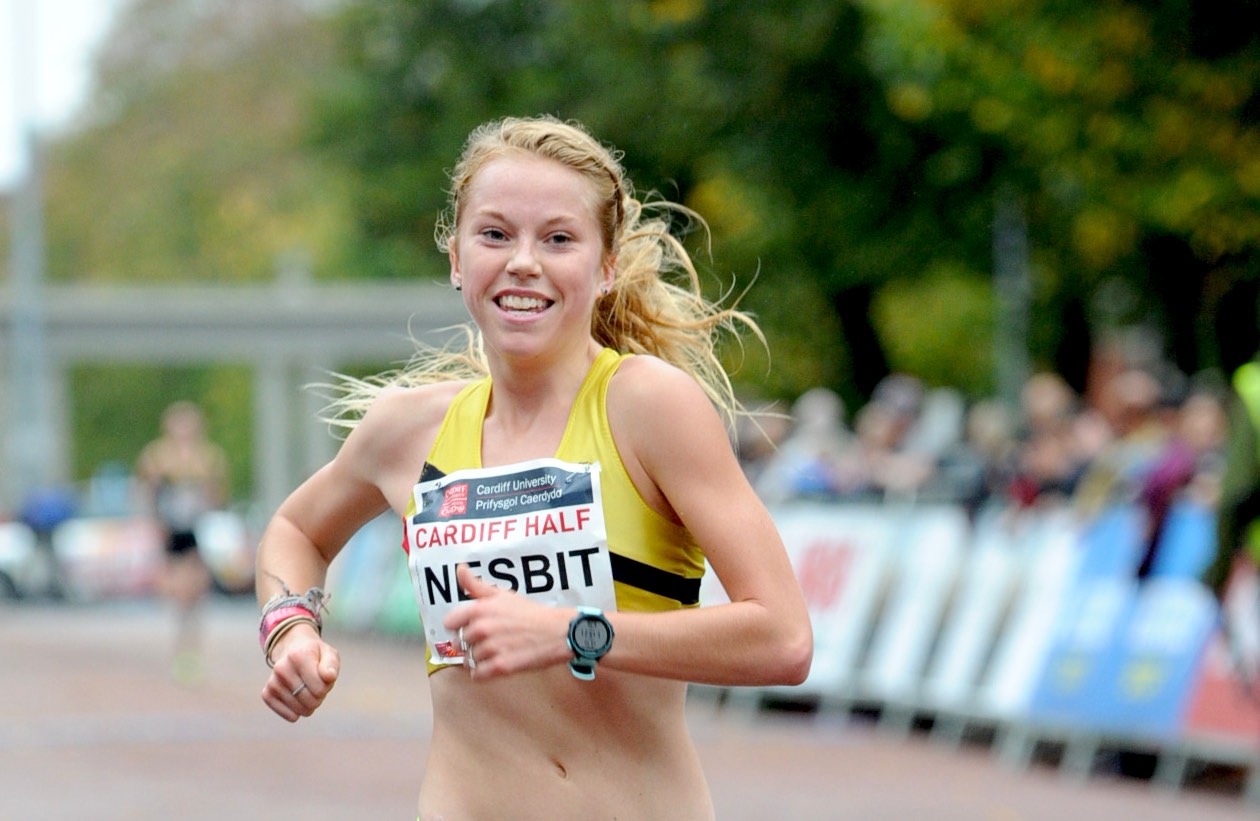 After winning the Welsh title at the Cardiff Half Marathon (October 1), Jenny Nesbitt achieved her second major career golden moment and is ready for more.

For someone still in their earlier twenties, Nesbitt has already experienced a whole career’s worth of setbacks and admits “there have been times that she could have easily packed it in.” But despite the challenges, including illness and injury, the 22-year-old has battled through, and now after winning a first Welsh title, she hopes it will springboard her back onto the international stage.

The Worcester athlete ran an impressive 1:13:23 for fifth in the Welsh capital to finish as the first British athlete and won a first national title.

“My goal was to be the first British runner over the line. After just coming off my break from the track season I wasn’t in the best shape, so I was cautious not to go out too hard and just ran as well as I could,” she says. “I got to about 10km and thought that I was the leading Brit and pushed on from there. I lost a group of male runners at about 11km and ended up running the last 10km on my own, that was hard work, but I just kept going to that finish line and surprised myself with my time. That was really pleasing along with my first Welsh title.”

Injuries, illness and success
Prior to her success in Cardiff, Nesbitt has had five years of highs and lows in running and life. The first serious challenge she faced and overcame was being diagnosed with an autoimmune disease in 2012, she says, “I remember watching the Olympics from the hospital. The disease that had a massive effect on my body, liver and kidney function. I was left really weak and ill and it took me some time to get over it. I missed over two years of running, but thankfully I was able to build myself back up. I am very fortunate that apart from a yearly checkup it hasn’t left any ill effects, although I do have to be careful with sore throats as they can be a trigger.”

After making a fantastic recovery, the determined Nesbitt, then 19, returned in 2014 and achieved a memorable career highlight beating Paula Radcliffe in the Worcester 10K. Nesbitt won the race in her home city, in 34:22, with Radcliffe third.

The following year she represented Great Britain for the first time winning a team gold at the European U23 Cross Country Championships. She was the third-fastest British athlete, behind Laura Muir and Madelaine Murray. Then in June of 2016, she won a European Cup 10,000m bronze medal, and just when things were going so well she was presented with another hurdle to overcome.

“It was a bad knee injury and it required an operation, it was a tough time. I had the operation in August 2016 and started running again in November, but about three weeks in I was struck down by another injury. As a result, it wasn’t until February of this year that started back running,” she explains. “I feel like I am back on track and this year I have managed some performances that I didn’t think were possible so soon the injury, so I am very pleased with that.”

Following five weeks of training in Font Romeu, Nesbitt went on to clock a personal best 32:59.52 over 10,000m at the famed Highgate Night of PB’s in May, before heading to the European U23 Championships in July, where she finished sixth in the 10,000m.

“I have mixed emotions about that European U23 Champs. After Highgate, I had a bit of a niggle and was forced to reduce my normal training, so I didn’t go into that race as fit as I could have been. I was ranked in the top three, so I did approach the race hoping to medal which I didn’t manage, but at the same time I was just really pleased that I managed to be competitive in the race after another setback,” she says.

“At the time I was a little frustrated with the outcome but reflecting now it’s another lesson and the experience is important because I am still learning how to race the 10,000m on the track. It was extra motivation to take forward to the World University Games,” she adds.

With little over a month in-between the European U23 Championships in Bydgoszcz Poland and the World University Games in Taipei, the Bath University student was happy to follow up her sixth place with fifth on the world university stage. Although Taipei itself had its own challenges. “I’ve never experienced anything like the heat and humidity at the World University Games. And on the day of our race, there was also a massive thunderstorm meaning the whole event was delayed. The disruption wasn’t ideal, but the heat and humidity was something you couldn’t prepare for. ” she explains.

After the delay and despite the conditions the 10,000m final finally got underway and Nesbitt was more than happy with her performance, saying “I was really pleased with how I raced because I ranked eighth and finished fifth. I tried different tactics in the race than what I’ve done before, I sat at the back and worked my way up and it paid off.”

Running solo
Nesbitt is not a sponsored athlete, but hopes after her “recent performances will help with that”. Coming from a small athletics club has challenges in itself and she admits she lacks competition, so trains on her own, but she has a strong relationship with her coach of a lifetime Dave Walker.

“Dave has been my coach from when I started running. We have a strong bond and I trust his advice and input. I come from a really small club and have ended up training mostly on my own, but to have Dave for his advice and support has been invaluable. Also, I am really lucky to have the support of Welsh Athletics. People like Chris Jones are always willing to give their suggestions and ideas and that complements my training,” she explains.

Having experienced many highs and lows by 22, she has learnt that there is an immense strength to be found in overcoming challenges.

“I have had a lot of setbacks and there have been multiple times that I could have easily packed it in and no one would have thought any worse of me. I was in a position where I couldn’t physically do any activity. I think the right mental attitude can help you achieve a lot more than you think it possibly can if you push through the problems you have,” she says.

“You have to enjoy what you do, there is no point aspiring to be an athlete if you don’t. You have to take each day as it comes, approach it with a positive attitude, and enjoy it. But you have to give it as much effort as you can, you can’t approach it half-hearted, whatever your goals are,” adds Nesbitt.

Looking to the future
Next up for Nesbitt is getting back to some cross country. “I will be running the Cardiff Cross Challenge, which is this month, and then a couple of races abroad and then come back and race in Liverpool at the end of November. This year is also my last year as an under-23 so I hope to make it to the European Cross Country Championships in Slovakia at the end of the year,” she says.

The 10,000m at Commonwealth Games is also a major goal and currently having achieved a B-standard time, she hopes to be selected for Wales. If it’s not to be, she will target the World Half Marathon Championships next March, and after that, like all ambitious young athletes after she has her sights on Tokyo 2020.

Jonny Mellor Back to His Best After Battle with Medical Condition
Galen Rupp Discusses the Chicago Marathon, Training & Mo Farah