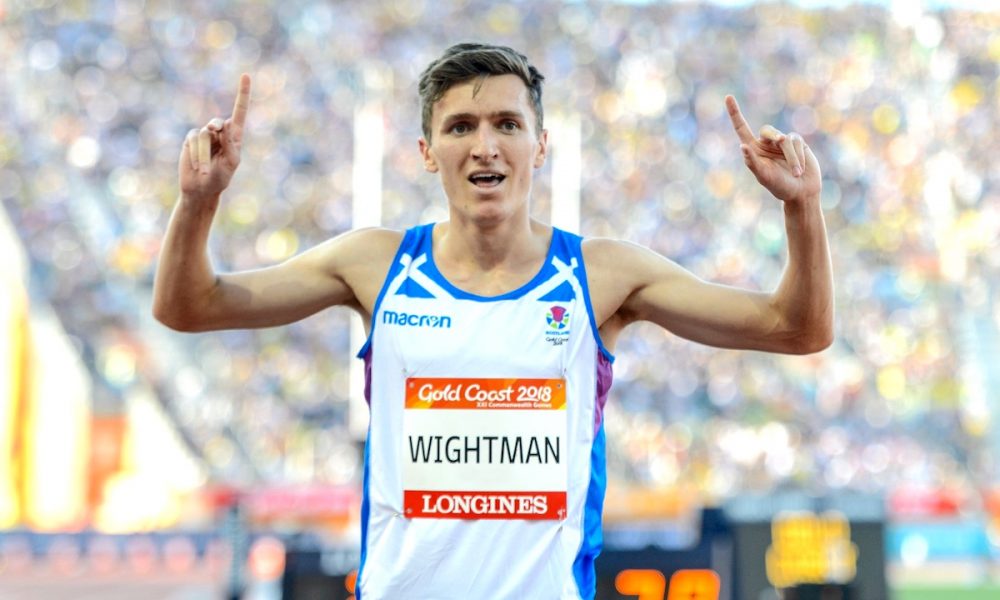 The Commonwealth medalist will miss the European Indoors, but with help from an ‘antique’ Nordic Track Ski Machine hopes to be back in the hunt for medals at September’s World Championships.

With Sky Sports on mute in the background, Jake Wightman sits himself down for 20 minutes for a prescribed slice of RnR.

Recuperation and Rehabilitation, in his case, on the high-tech ultrasound system that is designed to speed up the healing of his presently injured butt.

Which, if you allow yourself a small snigger (since he does, it’s allowed), makes for a particularly revealing treatment session in the lounge of his London home.

“We live next to an old peoples’ home,” he guffaws. “So hopefully they can’t see too much through the window.”

The glute, the whole glute, and nothing but the glute. A pain in the you-know-what which Wightman sustained just after Christmas – swiftly diagnosed as a stress fracture in his sacrum – means that the outdoor European 1500 metres bronze medallist of 2018 will not be chasing down an indoor version in Glasgow this spring.

Instead he has embarked upon a period of self-treatment, then a rehab stint at Bisham Abbey, with the mind-numbing tedium of jogging in a swimming pool as his sole running option until the middle of the spring.

Patience will become his virtue and Netflix his best chum.

“The (longest spell out) I’ve had before was before Commonwealth in 2014,” he recounts. “That was a strain and I had a little tears in my hamstring, and I probably didn’t run for two, maybe three weeks, but then I could get back running by the end of that, whereas this is just going to be a complete two months off running.

“It’s a bit nervy, because I don’t really know how I’m going to respond coming back to running. I hope I can almost keep my fitness up from cross-training and get back into my running as quick as I’d hope to.”

Who needs to be buying new technology?

Idle hands make online shoppers, so the saying goes. Not for Wightman a discount set of new pans on Amazon or that Alexa-enabled toaster you never knew you needed.

“It’s funny,” he reveals. “I bought this thing called a Nordic Track Ski Machine, which Paula (Radcliffe) used to use a lot.

“My physio suggested getting one of them, so I went on eBay and for 60 quid I got one down in Portsmouth. I drove there, and it was an old couple that had had it in their garage for months.

“It was rusty and all sort of squeaky, so I oiled it up, gave it a little clean, and I went on it for the first time this morning.”

Bringing the Alps to my flat for a session this morning ⛷

Beats sitting on his problematic posterior. Takes the mind off what could, even at the age of 24, have been the final chance of his career to pick up a major title on his native Scottish soil.

With the field for Glasgow in March likely to be disrupted by the need for self-preservation ahead of a highly belated summer IAAF world championships in Doha, some medals may be there for the taking.

Given his performances last year, when he also acquired a bronze at the Commonwealth Games, it is an opportunity that knocked but no longer. Acceptance, then moving on. “I keep thinking to myself, if it wasn’t in Glasgow, would I be as bothered?” he acknowledges. “But I think I probably would be … but I’m glad I’ve got a diagnosis that means I have to miss it.

“Because if it was something that put me out for a couple of weeks and there was still a chance I could do it, I think it could get pretty frustrating.”

Focus now turns to the World Championships in Doha

Instead, it will be a global gong in the heat of Qatar that will keep him afloat in the shallow end, using his other online splurge – a pair of waterproof headphones – to block out any curious stares.

Before Christmas, prior to the strain, it was all going so swimmingly following an altitude stint in Arizona that was teeing him up for the campaigns ahead.

Dad Geoff is now a full-time coach, his stints on stadium microphones apart. Funding from British and Scottish Athletics has allowed him to jet back and forth across the Atlantic, including a dart to Spain to oversee Steph Twell’s marathon debut before re-joining his son in the mountains.

When Wightman Jr. first tried training up high, there were mis-steps and illnesses but it is an approach with which he now feels comfortable.

The latest foray to Flagstaff seemed perfectly ideal for his needs.

“I’d come back probably fitter than I had done at any time,” he declares. “I don’t know if that’s probably a bad thing, having seen what’s happened now. But I know how I can train without digging myself into a hole and I know how to recover properly.

“I know how to get the best out of myself now and listen to symptoms, whether I’m too tired, whether it is just the altitude. I had a really good camp all of December, which is why it’s even more frustrating this has happened, because it came on with nothing.

“Nothing out there suggested that my body was in any sort of bother. Then within two days, it was just, yeah, I could barely run.”

Perversely, he knows, a sedentary spell might work in his favour. Doha is a long way off. Sensible pacemaking is needed off the track in 2019, as well as on it.

The timetable there would afford him the chance of an 800-1500m double. It is a twin test that worked well for him last year. I’d do it again, he confirms. The coming of Jakob Ingebrigtsen means that Wightman can no longer be considered a young man on the rise. Time marches on. Fortunately, his race craft has accelerated greatly since three years ago when talent propelled the former European junior champion into positions of strength but tactics let him down.

“I think when I went to London (worlds in 2017), I definitely was fit enough I think to make the final, but just didn’t race well at all,” he reflects. “I think I needed a championship like that just to realise what mistakes I made, and I tried to make amends to that last year.

“And it came off for me. So I hope that I can get myself in the right shape to be able to go through the rounds and then see what we can do in the final.”

Missing out, if you’ll excuse the obvious, would be a pain in the behind.

“At the moment, I just have to focus on getting myself back running,” he underlines. “It’s going to be tough to make that team in the first place.

“So I have to get there first.”