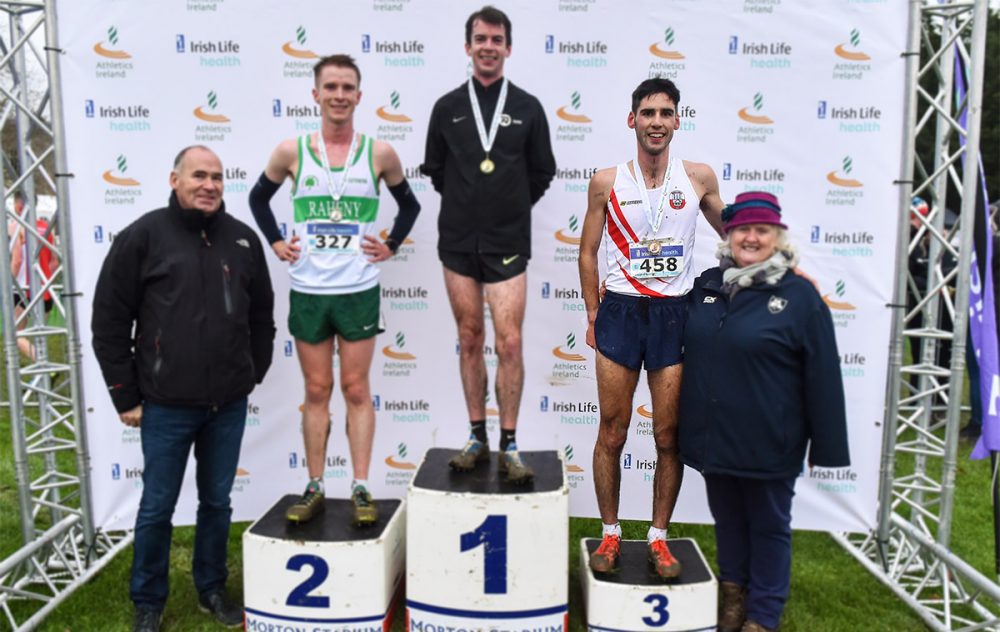 Paul Pollock’s return to the top of Irish Cross Country rightly grabbed the headlines in Abbotstown last weekend, however, there was another almost more compelling story – that of Hugh Armstrong on the third podium step.

Chasing podium regular Kevin Dooney all the way to the line in a battle for second, Armstrong in the red and white of Mayo club, Ballina A.C, surprised everyone outside of those who know him best.

The gritty performance saw him finish ahead of more known figures like John Travers and Stephen Scullion. His reward – a place on the Irish team and a first senior vest at the European Cross Country Championships in little under a week’s time.

“Winning a first international cap is an important step for me and I am very proud to represent my country at senior level,” he says. “It is a while since we have had a Mayo man on an Irish team, and that’s good because Connacht is often considered the weakest province in Ireland.”

The unknown presence of Armstrong at the Irish Cross Country Championships can be attributed to his time away on an athletics scholarship in America at renowned Providence College, a well established breeding ground for Irish distance runners in recent history.

“Going to Providence in 2013 was a great decision for me and I have enjoyed every bit of my time there,” Armstrong says. “I’ve made steady improvements each year and it’s a really great program.

“I had a fantastic Irish coach, Ray Treacy and the environment is perfect to do well there,” he adds, attributing a lot of his development to time he spent under Treacy.

The signs were there

However, despite his rapid improvement on the other side of the Atlantic, the signs of his latent ability had been evident for a number of years. Like a lot of young athletes, Armstrong dabbled in a number of sports and began running with Ballina AC at U10 level.

“I didn’t train too seriously, or even get very good at running until I was much older,” he says. “However, in cross country, I won some Connacht medals with the club or county team when I was younger, but we were never competitive at all at the All-Ireland level.”

“When I was 15 or 16 I started to train and focus a bit more on running and made some improvements.”

He linked up with Sligo athletics coach Dermot McDermott and the results soon followed. Coach and all round athletics aficionado McDermott is a well-known figure on the Irish running scene with his innovative fastest feet programme and his success with young Irish athletes across a wide range of disciplines. 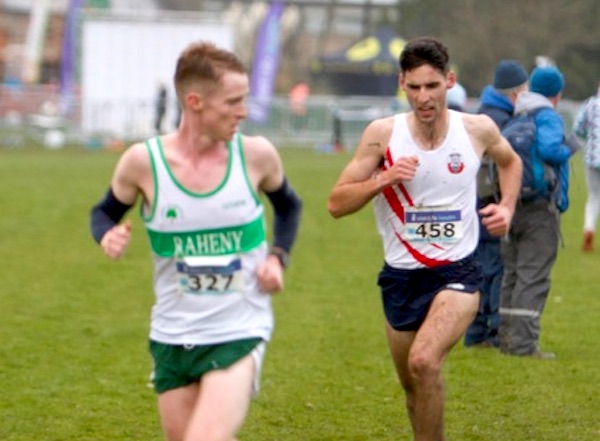 “When I joined up with Dermot I was training much harder. Now I had a purpose and a plan,” Armstrong says. “He really made me believe I could be great, and he brought me on to a new level, where I was winning medals at All-Irelands and looking to qualify for internationals.”

Despite scant previous success on the national scene, things took a turn in 2013. At the beginning of that year at the National Junior Interclubs, Armstrong’s performance and the unexpected pressure he put on Clonmel’s Sean Tobin was the sign that the partnership with McDermott was really beginning to flourish.

He walked away with silver that day, and now four years later, himself and Tobin will make their Irish senior debuts together on December 10 in Samorin, Slovakia.

This was backed up by another gutsy silver medal at the Irish Schools in Jordanstown in March. The real breakthrough came that summer when he qualified for the European Junior Championships over 10k. From that, Armstrong gained valuable international experience and attracted attention at home and abroad.

“Going to America, was not something I ever really thought about during secondary school, he says. “I didn’t have fast enough track times to receive offers from any American colleges, but Dermot had made contact with Providence, and I was offered a scholarship there very late, based on some good performance over cross country.”

Despite finishing up his undergraduate studies in Providence in May, Armstrong has chosen to remain based in Rhode Island. It’s a place he views like home and now competes for post-collegiate club Ocean State AC, still under the guidance of Treacy, while undertaking a masters course.

“It’s a very good group,” he explains. “We have a club team amongst ourselves and get some support from New Balance. I train mostly with Julian Oakley, Shane Quinn, Trevor Crawley, and Jordan Mann, all of us graduated from Providence College over the last few years. It is a quality group, most of them have PBs faster than me.”

One of the names Armstrong mentioned Shane Quinn, from Ferrybank AC in Waterford, is another Irish athlete who has successfully passed through the NCAA system.

So far the set-up of being surrounded by a “quality group” of athletes has worked a treat for the young Mayo man. During the daily grind and hard sessions, this is something that is imperative for any distance runner at that level to succeed.

Looking to the foreseeable future, Armstrong hopes to continue to challenge for senior berths both in cross country and track and wants “to be consistently good”.

With personal best just outside 14 minutes for 5k, 29 mins for 10k, and a debut 66:57 half marathon – his work ethic and no-nonsense attitude will surely see him break through these times soon.

Zak Hanna: bikes to international runner
Elle Vernon: back in the athletics spotlight