Gina Akpe-Moses: “fear is nothing but an obstacle, and once you overcome it, you’re literally unstoppable” 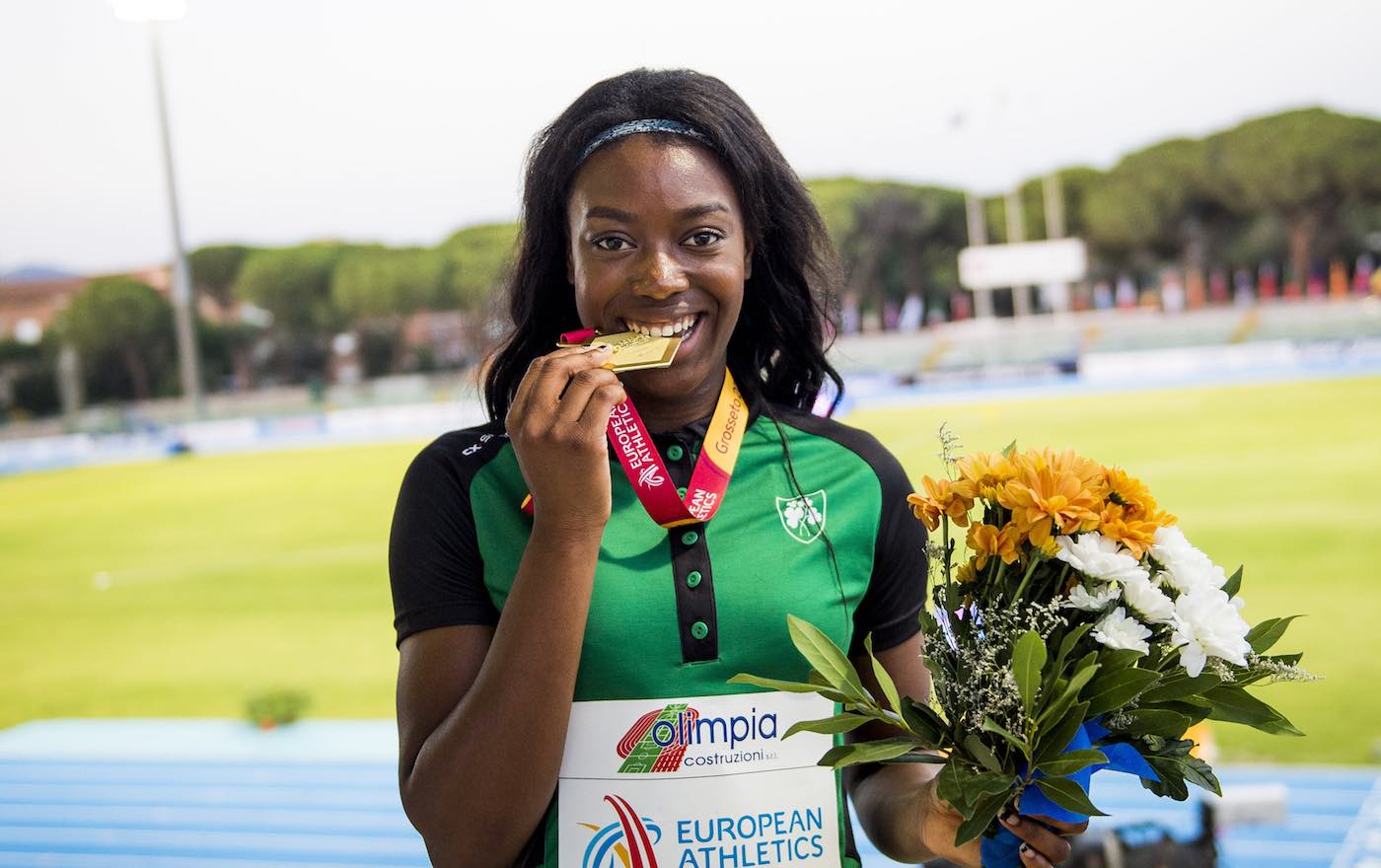 Gina Akpe-Moses made history this summer when she stood on top of the European podium following her golden sprint performance in Grosseto, Italy.

The 18-year-old’s 100m win at the European under-20 Championships, on July 21, was not only a huge personal achievement, but it also represented Ireland’s first European women’s sprint gold at U20, U23 or senior level. When you ask about the achievement, the Nigerian-born and Irish-raised Akpe-Moses humbly says, she’s “happy with what she managed to achieve this season.”

Humility is a refreshing trait to see in someone as talented as the top women’s under-20 sprinter in Europe, and should stand by her on the journey towards next year’s World U20 Championships and the Toyko Olympic Games in 2020.

Now, two months on from her European win, let’s set the medal down for a moment, and get to know the person that bit better.

Outside of sport, who do you look up to?
Outside of sport, it’s my mum. She is a very strong character, and over the years has really shown me that fear is nothing but an obstacle, and once you overcome it, you’re literally unstoppable.

I adore her perseverance and I try to use that when I’m out on the track.

And in sprinting and athletics?
I know it’s such a typical answer, but I do look up to Usain Bolt. I just admire the fact that he’s defeated all the odds he faced and it makes me feel like anything is possible.

Your faith in God, what does it bring to your racing?
My faith plays a huge role in racing, it brings me peace on the track and it’s a type of reassurance that everything will be ok no matter what happens.

It completely changed the perspective I have of my races and how I approach each of them. Now, before a race, I just think that whatever happens, happens, and God’s timing is the best timing, so just go out and run your best.

Recently you raced against world silver medalists Asha Philip and Desiree Henry at the Great North CityGames. How did you find the experience?
I found the experience exciting, but I still tried to keep a cool head because if I had got too carried away, I wouldn’t have been able to focus. It was a good experience being up against the best and hopefully, it was a little taste of what’s yet to come.

Afterwards, Asha Philip and Desiree Henry just congratulated me on my race and said I should enjoy the sport while I can.

Back in 2014, you and your family moved to Birmingham, from Dundalk, Ireland. How do they compare?
Compared to Dundalk, Birmingham is a lot bigger and busier of course. I feel like I have more opportunities in Birmingham and as a large city, Birmingham offers better facilities for training.

Dundalk is quiet and chilled and I enjoy that, but I also like the way Birmingham is busy and there’s always something to do.

In Birmingham, you now train with Birchfield Harriers, one of the biggest clubs in the UK, and are coached by Andy Paul. What’s that like?
I love running for Birchfield Harriers, they’re a very supportive club and it’s a friendly environment. I train with the likes of Jake Porter, Kyle de Escofet and some other top athletes, so it’s a very competitive group, but it’s exciting and encourages me to run harder and better.

Andy is a very good coach and we have a very solid athlete and coach relationship. I think what I’ve learnt from him most over the last few years is just to believe in myself and that has helped give me mentality needed to compete against the best.

My coaches at previous clubs, Blackrock AC and St Gerard’s AC in Ireland, have also massively contributed to where I am now, and I would describe them all being helpful, encouraging, motivated and hard working.

College currently, hoping for university next year and aspiring for the top sprinting accolades. Is it a balancing act?
Being in my last year of college, there’s more pressure to make sure I get into the university I want, and importantly making sure I get the decision right.

I train six days in the week, so from Monday to Thursday I’m training and at college, but on Friday I have a break from training and get back to it the weekend. This autumn and winter it has changed a bit and I’ve now three gym sessions instead of the two, but a similar routine.My coach has also made sure that training doesn’t clash by working around my college timetable. Thankfully, because I’ve been balancing training, racing and other aspects of my life for a while now I am used to the routine and have found what works for me.

What do you think of the exciting new generation of Irish sprinters?
I think the new generation of Irish sprinting in very very talented and I’m really keen to see what the future holds. Patience Jumbo-Gula is an exciting talent you should keep an eye on, I’ve known her for years and we used to be training partners. She also recently medalled in the 100m at the European Youth Olympics.

Looking at the junior world sprinters, who do see as your competition?
To be honest, I see everyone as competition who is at the same or at a higher level. There is no one specific main rival, I think we are all equal and chasing the same dream.

Next year it is the World U20 Championships in Finland, and following that it’s the Tokyo Olympic Games in 2020. Clearly your goals?
As long as I qualify, I will just approach Finland with the same relaxed mentality that I had for European Championships. I’m not going to expect too much but just going to go and execute all the rounds.

Tokyo 2020 is definitely in my plans for the future but I’m not focusing on it too much at the minute, I’m just taking each of the next three years as stepping stones, and step by step making sure I’m improving towards 2020.