George Routledge and his love of the English National Cross Country 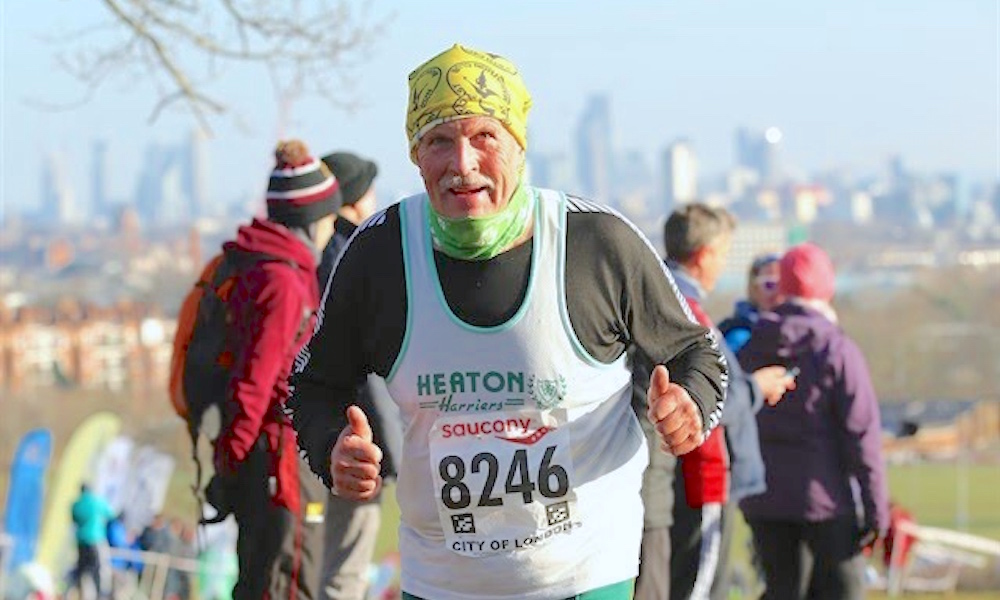 The Heaton Harriers’ runner and multi-eventer has run in almost every single National since 1987.

George Routledge may never have worried the leading pack or the national media with his finishing positions, but his unyielding passion for the English National Cross Country Championships is what drives the 71 year-old to tackle the 12k challenge every year.

Routledge’s best performance at the jewel of the English cross country racing season was a top 600 in the late 1980s – no mean feat considering the class of the field, which would have featured athletes of the calibre of Olympians including Dave Bedford and Ron Hill.

Since then the North East Vets multi-eventer has stoically competed in every single National save for a handful he had to reluctantly sit out through injury.

His last few performances may have seen him finish last or within the last three across the line, but his enthusiasm for the sport has not waned an ounce. If anything, Routledge is more in love with running than he ever has been.

“To say I love competing is an understatement,” he chuckles. “Last year I competed in 108 events. Some events were in Europe or organised by ARC (the Association of Running Clubs), so don’t appear on my Power of 10 profile.

“Where I compete in a track fixture – even though I might do two or three races and two or three throwing events on the same night – I only count them as one.”

This gives some idea of just how often Routledge toes the racing line, regardless of his chances of finishing in the medal positions.

A late starter to running

The Heaton Harrier stalwart’s venture into running began in 1985 after losing two stone with Weight Watchers.

“I was looking for a way to keep the weight off,” he explains. “Along with many others, I was inspired to take up ‘jogging’ after watching the London Marathon on TV.

“I did my first half marathon – the Gateshead Pearl Assurance Half – the following month, followed by the first of 16 outings at the Great North Run that autumn.

“I caught the running bug immediately, especially as my times started to improve. I then joined Heaton Harriers through a friend at the factory where I worked.

“Even though I tried all disciplines of track and field with the club when we were based at the Lightfoot Stadium, I particularly enjoyed running in the North East Harrier League Cross Country events.”

And so began an enduring obsession with cross country, in particular the National Cross Country.

Somewhat surprisingly considering the freedom for any runner to enter the championships nowadays, when Routledge first joined the Harriers in December 1985, clubs were only allowed to enter a maximum of nine men.

Naturally, those select few were also usually the club’s strongest athletes, chosen because of their strength in competition rather than opting for a ballot system, such as is used in London Marathon club draws across the length and breadth of the UK.

Alas for George, the 1986 National was held locally in Newcastle. Due to the fact he had no form whatsoever over the country at that early point in his athletics ‘career’, he was forced to stand on the sidelines at a point he was positively itching to get involved with the gloriously gutsy action.

Running at the National

Still in his late thirties, he realised he had plenty more nationals to aim for, making up for that initial disappointment of missing out by competing in nearly every single championships since.

“When there was a lot of travelling involved – and members were less willing to travel – I was able to take part in Northerns and Nationals all over the country, with London’s Parliament Hill becoming my favourite,” he says.

“Along with the Nationals I’ve also competed in most Northerns and North Eastern Championships since 1987, having only missed a handful through injury or holidays.” What is it about cross country championships – and the National in particular – that keeps drawing Routledge back, time and time again?

“The atmosphere of the National and the Northerns is what does it for me,” he says with real emotion.

“Competing against the best in England. Feeling the earth shudder at the start, the challenge of what was then 15k (and now 12k), the mud, the team spirit, the encouragement, the list goes on!”

A quick glance at the 71 year-old’s National record since 2010 – last in 2010 and 2012, 11th from last in 2011, third to last in 2014, last in 2016 and second to last at his beloved Parliament Hill last year – “Racing slowly help me stave off injuries!” – highlights both the beauty of the event and his immense strength of character to keep taking on what many would consider the sport’s toughest challenge.

While Routledge enjoyed considerably higher finishing positions and decent road times in his younger years – his PBs include a 3:29 marathon from the 1990 Wear Valley event, an 86 minute half marathon, a 61:18 10 mile best and a 36:15 10k – it is all about the taking part that counts now.

The septuagenarian is certainly unafraid of taking on challenges that many athletes half his age would balk at.

Just last year he ran the Hexham Track Marathon – all 106 laps of it!

“I hope to do three or four more marathons this year too,” he adds with a smile.

Not content with racing in the mires of the mud on the country and taking on the harsh tarmac of the roads, he has done almost every single track and field event as a V70 athlete.

Keen to experience every discipline athletics has to offer, Routledge regularly competes in pentathlons, javelin, hammer, discus, shot put, 2000W and 3000W, along with every single track race distance on the event programme.

Perhaps his background in league Rugby Union and football accounts for some of his enviable endurance.

Amusingly though, he admits he used to hate the running part of the training before he took up athletics!

While he no longer puts in as many training miles as he used to – “My average week’s training is the miles I run in races, and nothing else apart from cycling to the shops!” – the sheer amount of competitions he throws himself into surely make up for a lower than average weekly mileage.

His enthusiasm never waning, he is keen to advocate masters athletics to any other veterans wondering whether to dip their toes into this booming area of the sport.

“My advice is simply to go and do it – you couldn’t have picked a better era or a better time,” he says pointedly. “I’ve done the British Masters Track & Field Championships a few times, the BMAF Cross Country many times, and even the World Masters Marathon when it was part of the World Masters track championships in Gateshead in 1999.

“I’m not done yet with new challenges though. My ambition has always been to do the New York City Marathon, but to do it well.”

So which races stand out in his mind as being the most memorable in what has to be one of the busiest athlete’s racing CVs?

“My favourite road race is the London Marathon, which I’ve done 25 times,” he reveals.

“And of course, my favourite cross country is the National! I am definitely going to try to finish at Leeds this weekend. I missed the Northerns when it was there last year, and I’m looking forward to a new experience.”

So for all those preparing to lace up their spikes for one of the most iconic cross country events on the racing calendar this weekend, put those nerves to one side and channel a little of George Routledge’s unbounded enthusiasm for the sport.

It’s meant to be a challenge of course, but don’t forget it’s also meant to be fun, so enjoy every muddy second on the hills of the Harewood House estate.

RELATED: A look ahead to the 2019 English National Cross Country Championships