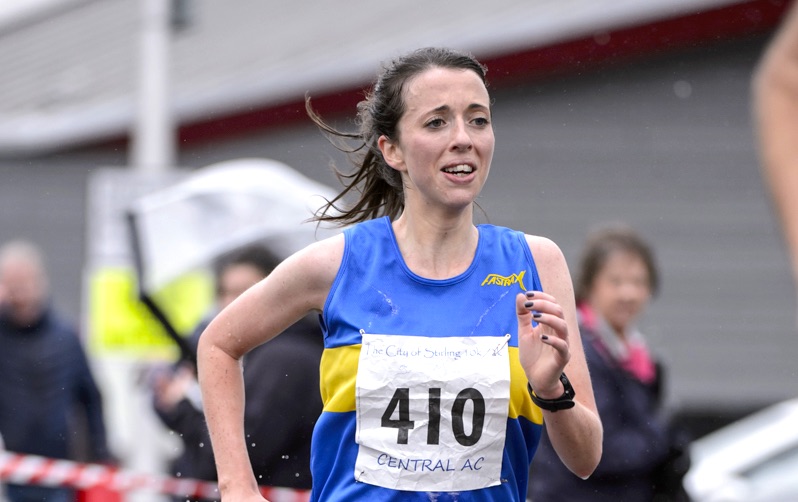 Fionnuala Ross insists she can “crack the marathon” in Frankfurt in October, after disappointment with her previous attempts at the 26.2-mile distance.

With an excellent season to date, that included the successful defence of her Scottish 10K road title in a sub 34 minute personal best performance, the Shettleston Harriers and Armagh AC runner, has shown the kind of form this year that can translate into the marathon of her life in Frankfurt next month.

Originally from Northern Ireland, with cross country and track experience in America, and now settled in Scotland, she first got a taste for the marathon three years ago in Berlin, before deciding in 2016 to take the longer distance serious.

“In London, I was aiming to run 6-minute miles from the start, but I wasn’t feeling great and probably should have eased off, and by halfway I was exhausted. It just never felt right, but afterwards, I just had to remind myself that I still ran a PB and it wasn’t a complete disaster,” she says.

The self-coach runner had a déjà vu moment over the unforgiving distance in Dublin later that year, with a first half split of 1:19:48 before a slower second half to finish in 2:53:03.

Indeed, not reaching her expectations brought disappointment and reflecting now Ross believes her preparation was missing something.

“I love the distance and I am determined to crack it, I just need everything to go right for me on the day. Thinking back to those marathons, I was getting the miles in ok, but my undoing was not enough long runs that incorporated speed work,” she explains.

So, in my training for Frankfurt, I am running longer marathon paced runs to help give me that speed endurance that I was missing. I know I have a good marathon in me,” she adds.

Earlier this month, she won a second consecutive Scottish title at the Stirling 10K, a race that incorporates the Scottish 10K Road Championships. On her way to the successful title defence, she broke the 34 minute mark for the first time, clocking 33:59. “I’ve won the Stirling 10K for the last three years, but I have only been eligible to win the national title in the last two because I wasn’t a member of a Scottish club in the first year. It’s a race that I love and the competition from the Scottish athletes is always great,” says Ross.

Speaking of her personal best performance, she adds, “I was delighted to finally break 34 minutes. I would have liked to have dipped under the 34-minute mark by a larger margin, but it was fantastic to finally achieve it, having been so close a number of times. Stirling is a great course but there are a few hills and it can be windy. If I was to get the right conditions and target a fast race in future I’ll hopefully take a huge chunk off that time.”

The Northern Irish runner has notched up a number of wins across the 10k and half-marathon distances, including titles at the Great Aberdeen Half Marathon, Inverness Half Marathon and Isle of Mull Half Marathon. In the latter Ross also set an ‘official’ half marathon best of 75:47.

Reflecting on her half marathon personal best, she says, “It’s a touchy subject, I ran 74:15 in the Great Scottish Run last year, but as we found out the course was short, so that was disappointing.”

The organisers of the Great Scottish Run officially announced, with an apology, that the course was 150m short at the beginning of 2017.

“Looking at last year’s race, I knew I was in good shape going into it and even if there had been an additional 150 metres, it would still have been a PB performance.”

“When the news broke, of course, I was gutted. Soon after the race finished there was chatter about it being short, so deep down I kind of expected it, but like everyone, I didn’t want it to be made official and lose my PB. I am sure the organisers will get it right this year because they can’t have it happening two years in a row”, she says.

The Great Scottish Run also incorporates the Scottish Half Marathon Championships, and Ross has finished second behind Elizabeth Potter for the last two consecutive years. She intends to race again this year as she continues her build-up to the Frankfurt Marathon on October 29th.

“It’s always one of the races I look forward to the most each year and it’s amazing to run around the streets of Glasgow. The atmosphere is something else and it’s a really great course. It always attracts a strong Scottish field, and with the calibre of Scottish athletes coming through in recent years it’s an exciting race,” explains the 26-year-old. “I am going into it to target a PB, but position wise I am not putting myself under any pressure, I just want to run my best before Frankfurt.”

Regardless of her performance in the upcoming Great Scottish Run, it is her following race that this season has been geared towards, and as the unforgiving 26.2 miles gets ever closer, Ross quietly knows she is more than capable of running and even dipping under the 2:40:00 mark.

She also has aspirations beyond running a great marathon, but with the qualifying standard at the Gold Coast Commonwealth Games next year a low 2:37:00, that may just out of reach at the moment, but such times are not unrealistic in the future.

“I definitely don’t think a major championship is out the question in the future. You wouldn’t expect it, but this year the qualifying standard for the marathon at the Commonwealth Games is lower than the World Championships, this based on past year’s and what you would have needed to finish in the top eight, she explains.

“In terms of future Commonwealth Games, I might look at the 10,000m again. I haven’t been on the track a lot in recent years, but I have a few good 10k times on the road, so maybe it’s a distance I could revisit,” she adds.

Not giving much away on her target time for Frankfurt next month, she finished by saying, “first I want to PB, and that’s my basic aim, but by how much, I don’t know. It’s a fast course and I just want to take as much time as I can off my London time. I have a pace in mind but I’ll not say what that is.”

Dewi Griffiths Looks Ahead to Commonwealth Games After Year to Remember
Gina Akpe-Moses: “fear is nothing but an obstacle, and once you overcome it, you’re literally unstoppable”