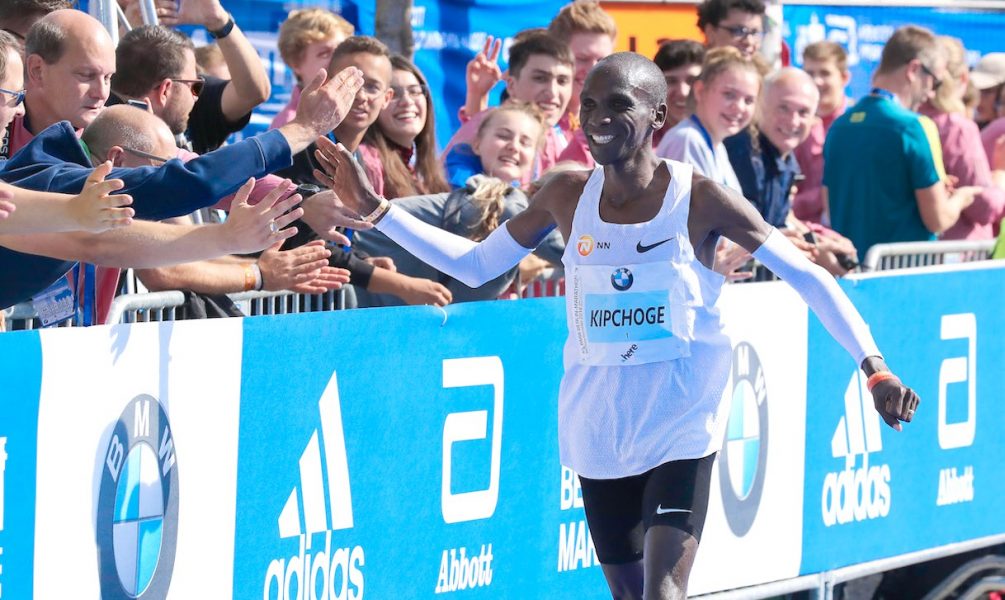 The distance running great says those closest to him played a huge part in his marathon world record.

Eliud Kipchoge astounded the running world by taking the huge chunk of one minute and 18 seconds off the world record at the Berlin Marathon on Sunday (September 16).

The Olympic champion still had enough energy in reserve to take to social media in the next few hours and express his appreciation of the part played by the various teams which make up the community around the greatest marathon runner of the modern era.

Kipchoge expanded on the importance of this community while relaxing the next morning in an arm chair in the hotel lobby within easy jogging distance of the finish line where he took the marathon into new territory with his time of 2:01:39.

“In sport you need to have a good team,” he says. “That’s why, in terms of where I’m going to run next, I’m going to have a full discussion with the management, with the sponsors, technical team, coaching team. It’s part of the team where they hold me in their hands.”

This was a point he made strongly in response to the last question posed at Sunday’s press conference where the assembled media were digesting the enormity of his achievement. Before any decision about his future racing, he would consult with this community.

He and coach Patrick Sang, the latter himself with a distinguished track pedigree as an Olympic silver medallist in the steeplechase, have a partnership going back many years.

Together they have created the path which took the then 18-year-old to the world 5000m title in Paris in 2003 to his current supremacy in the marathon. But the multi-faceted aspects of Kipchoge’s teams or community have taken time to develop.

“It’s not a one-day event to bring together a good team, it takes ages but I’m lucky to be working with Global Sports Communication [GSC – his management team] and to be with people who think in a really positive way and we have come a long way together,” he explains. “That’s why we have our team-mates and we think together, we have a coaching system, management system, the sponsorship systems and, above all, we have the medical system whereby they handle us with massage and everything.” It is an approach which could be summarised from the Biblical injunction of “to every thing, there is a season.”

Hence Eliud Kipchoge responded that it was too soon to consider if he could improve his world record further.

“It’s too early to do that because it’s only a few hours since I ran the fastest time ever,” he says. “I don’t think it’s good to think about it – the core thing now is to make sure I recover fully.”

While saying it is also too early to consider whether he wants to compete in the marathon at the World Championships in Doha next year, he doesn’t lose sight of the fact that he is the reigning Olympic champion and Tokyo 2020 draws ever closer.

If he is on the start line in Tokyo, his preparation for the race of races in the distance firmament will not differ from that for a big city race where finishing time, as well as place, are significant.

“It’s about the gold medal but the preparation is the same – you should be comfortable with pacemakers and without pacemakers,” he says. “Tokyo seems far away but it’s at the back of my mind that I will really assemble myself in Tokyo.

“I am the Olympic champion and I feel like defending my title.”

As we witnessed at the Berlin Marathon on Sunday, when Eliud Kipchoge and his team set their sights on something, there is currently no-one else in the marathon world to match him.

One thing is sure from his comments after the race, Eliud Kipchoge does want to return to Berlin. It remains to be seen if that might already happen at the 46th edition of German capital marathon which will be held on 29 September 2019.

“Definitely I will be coming back,” he adds. “I always say Berlin is for me forever.”