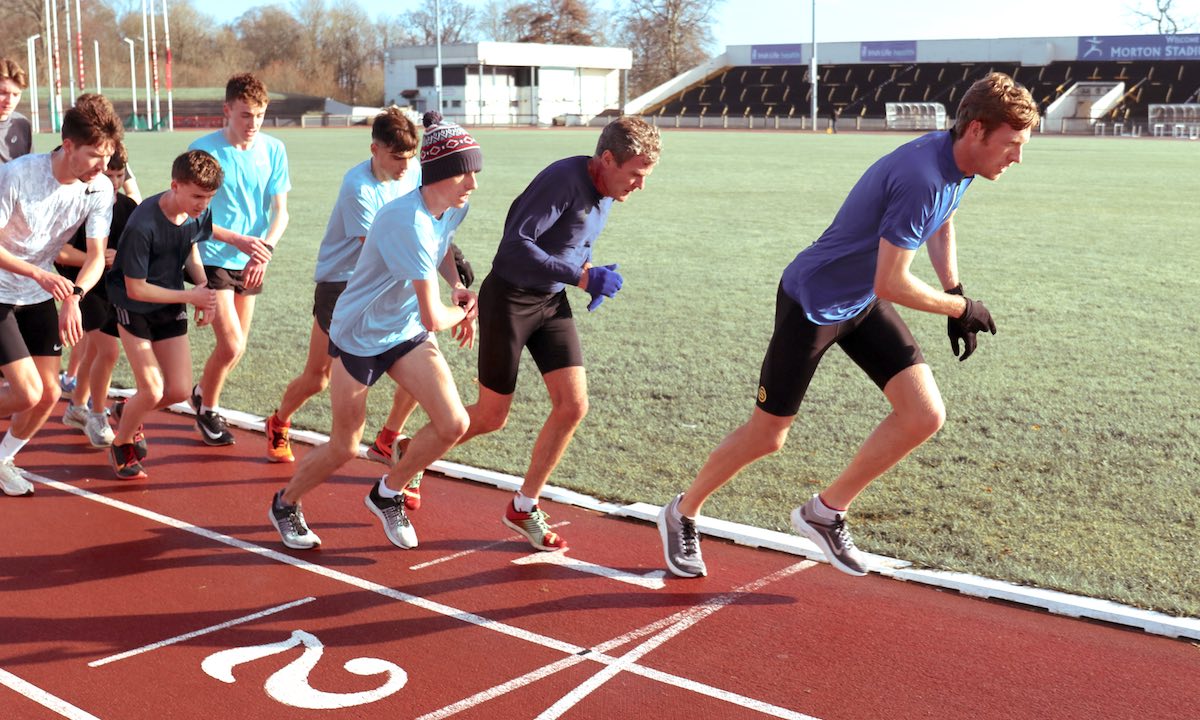 Feidhlim Kelly chats to Bláithín Sheil to explain why he established the Dublin Track Club and what his aspirations are for the training group.

As a teenager the school coach had the idea of sending a school team to the Penn Relays in the Distance Medley Relay. They wanted Feidhlim Kelly to run. “F*ck it for a free trip to America, I can run 400 metres,” he recalls saying at the time.

Kelly, who founded the Dublin Track Club in 2016, originally aspired to be a soccer player. He ran 2:01 over 800m when Dick Hooper of Raheny Shamrock told him he could be a good athlete, but despite best efforts, he never broke 1:50.

Kelly recalls watching the Ajax Academy videos as a young soccer player. He had a dream of someday being a coach, driving kids around, having his own Ajax Academy. One day his prayers were answered, he thought he was getting a trial for Ajax. It turned out to be an Ajax cleaners flyer. He didn’t make it in soccer, but he certainly is living his childhood dream of developing his own academy. All he needs now is a van.

Kelly did try to be a professional athlete, he trained in Teddington, London with Sonia O’Sullivan, Bolt, Farah and others. In Kenya, Brother Colm wrote out a “bit of a schedule” at one stage for him.

“I was trying to be a professional athlete but I didn’t know how,” he says. “I did a sh*te job of that.”

There he got an insight of the level Sonia O’Sullivan worked at, even at the end of her career. Sonia and Catherina McKiernan were hard women, not scared of the cold and rain, they would be asking for more and you need to hold them back. They got the basics right. He witnessed what champions are made of, the ruthless and the mundane, the ability to train and run every day.

Living the simple life means you go to bed at 10pm, you get up for your run at the same time every day, you turn up ready to work, you do your stretching, you take our recovery seriously. Eliud Kipchoge is a prime example. Irish athletes, in Kelly’s opinion, won’t do the basics yet they worry about the big pieces. The principles are simple, but they are hard to follow. Feidhlim draws an interesting comparison between a practising Catholic and a priest. You can practice your religion, go to mass, do all that is required as a lay-person, but taking the step up to full immersion as a priest is a different level of commitment. The same applies to running. You can say you are training hard, but you’re not really, “you’re not doing the business”.

Forget about drugs and doping, at the moment we can’t even hit minimum standards. “I want Irish distance running to reach the standard it reached before, a decent level, and if we fail, we will go down fighting,” he says passionately.

“The Dublin Track Club are raising standards, whether they like us or not,” Kelly adds. He hopes that people will be inspired to beat them.

Kelly’s training programme is largely strength based and he cannot overstate the importance of consistency over a long block of time. Using the Lydiard model and taking inspiration from Percy Cerutty’s lifestyle, the group workouts can be seen on their Twitter and Instagram pages, as well as on Strava.

Team member Andrew Coscoran has a gift for video making and does an excellent job of creating a buzz in his videos. It’s kilometres on Tuesdays, threshold Thursdays, and some sort of hill session on Saturdays. Kelly likes to watch the group progress over the weeks in a similar training pattern.

When asked if they ever sharpen for races or if he sends them onto the track on strength, he laughs and says yes they do sharpen, but it is clear that there is a firm commitment to the principle of “if you’re fit, you’re fit”. Two days after his tenth place finish at the European Cross Country Championships, Sean Tobin set down a European Indoor standard in the 3000m at the NIA live meet.

He thinks that too many people train too fast and too hard. If he could buy Jack Daniels running formula, it would be strength based. Training hard teaches you to hurt but not to improve your cardiovascular fitness. The key is in the consistency. If you have a good or bad race, what do you do the next day? You run. The sessions are not necessarily hard in themselves, but the load is relentless.

Tobin is committed to the Irish base for the foreseeable future and is using Feidhlim’s connections with Melbourne Track Club (MTC), coached by Nic Bideau to further develop his career. Kelly spent a block of time training there himself to learn.

Kelly feels that nobody in Ireland wants you to succeed, people will tell you every reason why you won’t. Society is driven to make you think you need a job, a house, tick boxes, a work-life balance.

Forget life balance in a running career, if you want to be anything great in athletics you need balance in your mind. In his view, you have plenty of time to enjoy the finer things in life, to earn money, to drink, to socialise, but you only have one chance in athletics when you’re young, so athletes need to be given the opportunity now.

In terms of his own training group, the Dublin Track Club, the lads are learning. In its short lifetime, the group has already seen some runners come and go. Kelly doesn’t like wasting people’s time. The key is that you come to train. People say he is lucky with his athletes, but he adds that you create your own luck. He knows he is lucky to have people like Sean Tobin and Paul Robinson linking in, but it’s also an opportunity for them.

Leaders like Tobin and Robinson, as well as the likes of Shane Healy and Gary O’Hanlon all help to create that atmosphere and environment that is so crucial.

Kelly sees athletes looking for instant gratification and results, and he is teaching them that it takes years of consistency to make it. It requires a lot of patience and sticking by athletes through the troughs. You can’t cram athletics, it’s a long game.

He notes that they don’t, as a group, have any great results yet, but time is key. And money, I asked? You don’t need a million euro to coach full time, but you do need enough money to get by, and it would be nice to be able to buy a cup of tea out. It’s better that athletes are developed here, yet we refuse to invest in ways we can help them.

When asked about potential funding opportunities, he responds heatedly that everyone wants to back a sure bet and that is the problem in Irish athletics. People won’t support him now, but if you never back anyone in your life, if you never take a risk, you will never get rewarded.

And of course, nothing is sure in athletics. In the meantime, they are getting on with it, with essentially a production line from Belvedere College coached by Ronan Duggan leading the men into the DTC.

There are people out there who can provide support. He stresses that he isn’t looking for a free pass by any means, but offers the example of being able to rent a house for the team at a fair rate. In the meantime, he puts up athletes where he can in his own home. Without the longtime support of his own parents in this endeavour, this would not be possible.

If he could have one secret ingredient that he is missing, what would it be? Time. Time to train, time to put in more as a coach, time is money, time to attend more sessions. And a bit of backing. It would be great to have a people carrier. No fuel money is passed between members, those with cars pick up and drop off those without.

The payment the athletes make is that they are committed, loyal, and they do their work. It’s a simple game, but it’s not easy. Feidhlim works his day job around the sessions. The group comes first and everything else fits in around that.

There is one female, Iseult O’Donnell, in the group. Is he looking to expand? No, it’s better for men to coach men, and women to coach women. As a man, he knows how men think and how to cultivate the right environment. Women are entirely different and require a different set up, and he thinks that women need to step up in terms of coaching other women. He hopes to have a few athletes at the Tokyo Olympics and thinks one of his guys might finally break John Treacy’s marathon record of 2:09:15. Kids should try to link in and train with the group, there is no recruitment process, it’s an open door if you’re willing to come down to the session and work.

As our conversation drew to a close, I asked him the why, fundamentally, what does he get out of this?