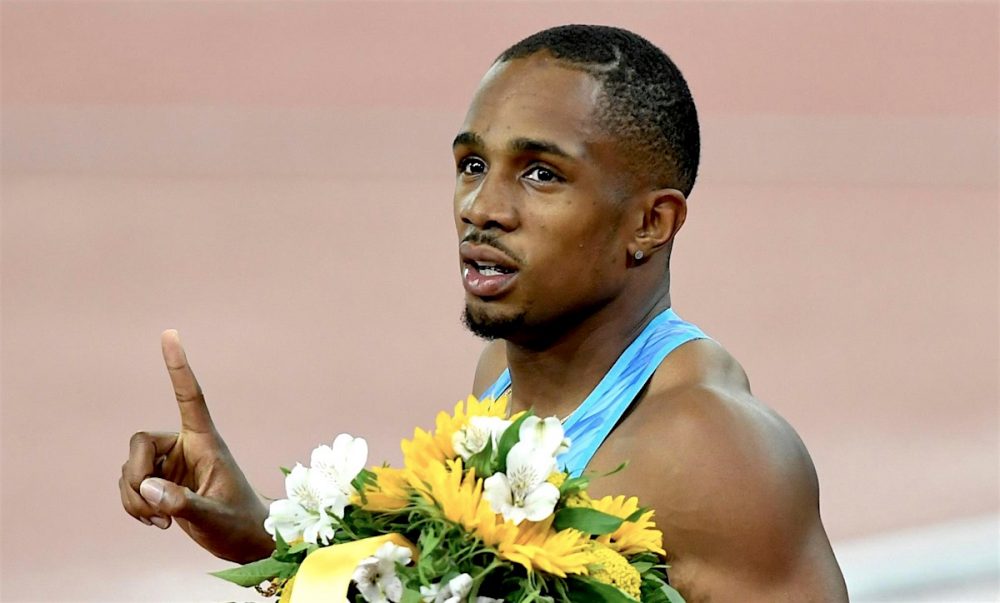 “I’m actually not a bad cook, I made a top lasagne last night and it was my first attempt too,” CJ Ujah proudly proclaims, before rhyming off a few of his favourite dishes.

It turns out, Ujah, who ran the opening leg for Great Britain’s winning 4x100m team at the World Championships, is quite the cook. “I might start making videos,” says the world gold medalist, and who knows someday after the spikes are hung up we might see him don an apron and appear on our television screens.

But right now, the 23-year-old Londoner is back at his Altis training base in Phoenix, Arizona – back to the grind after a summer that won’t be forgotten.

For the best part of a year he has been under the guidance of renowned sprint coach Stu McMillan, also the performance director at Altis. Among his training partners, he can name Canadian star Andre de Grasse and USA’s Ameer Webb, who finished fifth in the 100m final in London this summer.

“The environment is second to none. Working with Stu, training with Andre and Ameer Webb – I couldn’t want more, these are the guys I will race,” he explains. “Everyday, day-in-day-out, you’re around world-class people, and that just helps prepare you for the high-intensity racing to run against the big names.”

McMillan is a coach of the finer details of an athlete’s program and while he sees the benefits of technology for calculating stride-lengths, stride-rate, etc. he still prefers and advocates the human relationship between a coach and athlete, firmly believing that these day-to-day interactions are the number one determining factor for success.

“He’s [McMillan] so focused on relaxation and just trusting in the training – that sets him apart,” Ujah says describing the qualities of his coach. “He has his methods and I’ve always wanted to work with him. He was with UK Athletics when I was a younger – I had a session or two with him but never got to work with him closely. I always hoped to and now I am here and it’s been good, it feels right.”

Regarding training with de Grasse, who won three Olympic medals at Rio 2016, he says: “Andre is a competitor and there’s a rivalry in training, but off the track, we are friends – Toronto and London are similar cities and we can relate being here in a quieter place like Phoenix.”

The coach, the world-class training partners, the warm weather and somewhat reclusiveness of the elite training centre, all appear to be the perfect ingredients for Ujah to now cement his place amongst the best in the world. It was a path that looked inevitable following his personal best 9.96 in 2014 – then aged 20.

The progression in 2015 and 2016 wasn’t quite the leap to ‘world-class’ expected. However this year it’s been a different story, consistent wins in the Diamond League, clocking 9.97 in the final to win the Diamond League Trophy, and three more sub 10 seconds performances.

“Up to this point, every year I’ve grown and that’s what I plan to keep doing. If you look at 2017 I’ve made great improvements and grown as an athlete. I’ve just got to keep doing that and if I can stay injury free, medals will come,” he explains. “I want to be the best.”

To “be the best,” is no longer an idle dream, and we saw signs of that this summer. On the individual front missing out on the 100m final was a disappointment, but winning the Diamond League Trophy only a couple of weeks later showed a willingness to move on quickly to the next goal and just “get the job done.”

“I expected to make the World Champs final,” he says reflecting on missing out by 0.02 seconds. “It was disappointing, after a great Diamond League season, confidence was high but these things happen. It’s just about learning.

“I felt pressure from the crowd but that’s not an excuse because I loved the atmosphere, words can’t describe that. I hope every athlete gets to experience a home crowd at the major champs, nothing can match it!”

He will experience that home support again next March at the World Indoor Championships in Birmingham, although not quite the same as a packed London Stadium.

While the Diamond League Trophy was the biggest individual win in his athletics career, winning a world gold medal alongside teammates Nethaneel Mitchell-Blake, Danny Talbot and Adam Gemili was by far “the best” win to date.

“What can you say, it was the best. The whole relay team, we’ve been through a lot together and I feel we deserved that. But do you know what almost tops the medal? I’ve watched the race twice since I’ve been back in Phoenix, and the girls [GB 4x100m relay silver medalists] reaction as they watched our race – it was like they were running every stride with us. That made it special for the whole relay team.”

You might be surprised to hear his gold medal is not with him in Phoenix. “You would think I would have it with me,” he says. “But no, it’s at home, safe, and being looked after.”

So like Ujah in the U.S. or Adam Gemili and Desiree Henry in the remote Dutch countryside, with coach Rana Reider, world 200m champion Dafne Schippers and others – sometimes it takes uprooting to make that next jump.

Every athlete is different though, a successful recipe for one doesn’t mean success for another.

But, Ujah seems to have found his in Phoenix. The right coach, the right set-up, training with the best day in day out – and should he stay healthy, a global individual medal, would surely be the icing on the cake.