US-based Charlotte Taylor’s blistering form on the track and country helped her fly to 6th place and first Brit at her first senior European Cross Country championships in Slovakia. 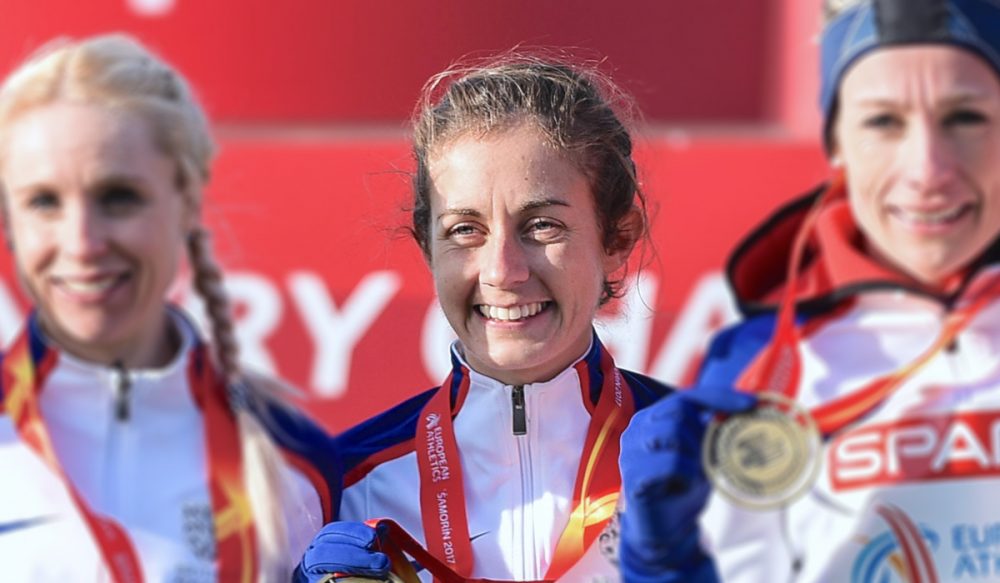 When Charlotte Taylor led the senior women home to team gold at the European Cross Country Championships on Sunday (December 10), the BBC commentary team couldn’t hide their surprise that the US-based athlete had out-run every one of her British contingents when finishing 6th overall.

Those who have been following the Nene Valley Harrier for some time, however, were not so surprised by her performance in Samorin, Slovakia, knowing she has built up quite an international racing pedigree since studying stateside at the University of San Francisco.

The masters student has amassed an enviable array of race results over the last two years, but 2017 has undeniably been the Spalding athlete’s breakthrough year.

Building on a fourth-place finish at last year’s European U23 cross country championships, she has taken the American collegiate track and cross country racing scene by storm this year.

Her US track season was a glittering display of guts and strong race tactics, with a fourth place at the Stanford Invitational 10,000m in March (just one second behind Eilish McColgan) a telling indication of what was to come from the diminutive 23-year-old. Crucially, her PB 32:11.80 run earned her that place on the World championships team, alongside Beth Potter and Jess Martin.

A stunning 15:29.07 result at the Payton Jordan Invitational 5000m in May preceded Taylor’s standout performance so far, when she won the NCAA 10,000m, becoming the first British athlete to win the American collegiate endurance title in the event’s history. Her winning final lap kick was an eye-watering 68.09. 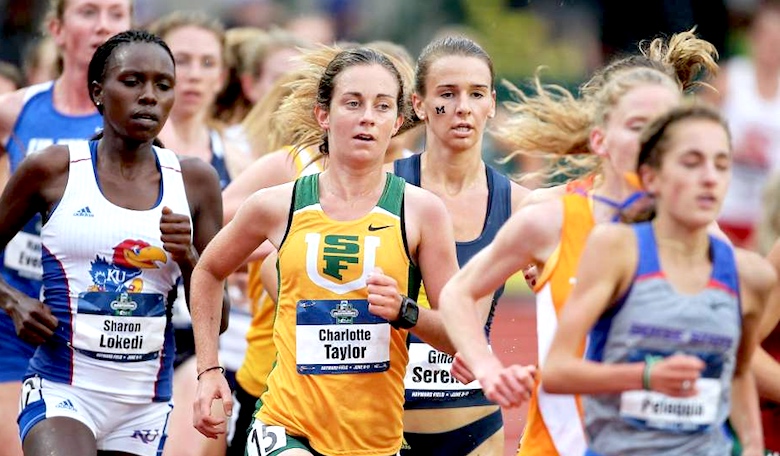 Reflecting on the World championships 10,000m race in August was, she says it was an “incredible, almost surreal experience”. She finished second Brit and 27th overall in 32:51.33 on her debut for the GB senior team.

It was just a matter of weeks before Taylor was swapping her track spikes for her cross country shoes when she kicked off her season early in America, coming second in the Roy Griak Invitational in Minneapolis. She followed that up with a third-place finish at the Nuttycombe Wisconsin Invitational in October, and just two weeks later won the West Coast Conference cross country in Oakland, California, by a massive 20 seconds.

Taylor built on that victory with another in the prestigious NCAA Division 1 West Region championships, and, although she finished third in the NCAA Division 1 championships a fortnight later – beaten by fellow GB athlete Amy-Eloise Neale (Wakefield/University of Washington), hopes were high going into the European Cross Country Championships trials at Liverpool the following weekend.

However, the conditions at Sefton Park could not have been further removed from those she had grown accustomed to in the US, with thick, sticky mud, sub-zero temperatures and driving sleet testing those gunning for GB selection to their very limits.

Taylor finished way down the field in 17th place, and, while she could have attributed one of the reasons she didn’t run her best race to jet lag – having only returned to England a few days earlier – she is brutally honest about her performance. 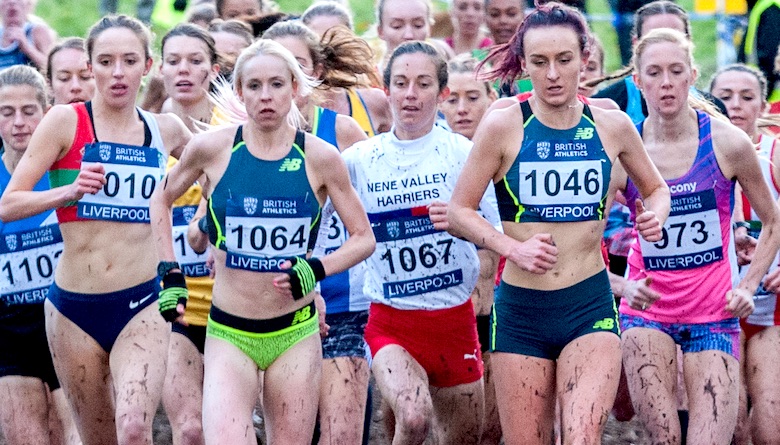 “I was quite disappointed with my performance at Liverpool,” she explains. “It was certainly a very different type of course to those I’d been racing on for the rest of the season, but I knew to expect that and, in hindsight, I don’t think I made the necessary adjustments to my race strategy to handle that very well.

“My NCAA season had gone very well, culminating in a performance at the NCAA championships that I was very pleased with. I believed there was still more in the tank and that I was in good enough form to make the Euro cross team, so I was disappointed to finish so far off that goal at Liverpool, and thought I had blown my chance at a place on the team. I’m incredibly grateful that the selectors had faith in my potential and were able to offer me the chance to prove myself.”

Her place on her first senior GB cross team was confirmed alongside established internationals Gemma Steel, Emelia Gorecka, Steph Twell, Elle Vernon and Lily Partridge. Athletics aficionados unaware of Taylor’s pre-race form could never have expected her to finish ahead of all five of her teammates, and, for much of the race, to be in contention for an individual medal.

The Lincolnshire athlete was understandably pleased with her run: “I’m delighted with the result,” she says. “I wasn’t really aiming for a specific position, and, since this was my first senior cross country race at this level, I hadn’t raced many of these girls before. In fact, with being based over in the US for most of the cross country season, I haven’t even been racing the British girls much, so it would have been hard to define a ‘good’ performance for me based off a position.

“Instead, I was focused on executing my race plan well and giving the race my best effort, so to finish 6th really exceeded any hopes I might have had with regards to an outcome.” 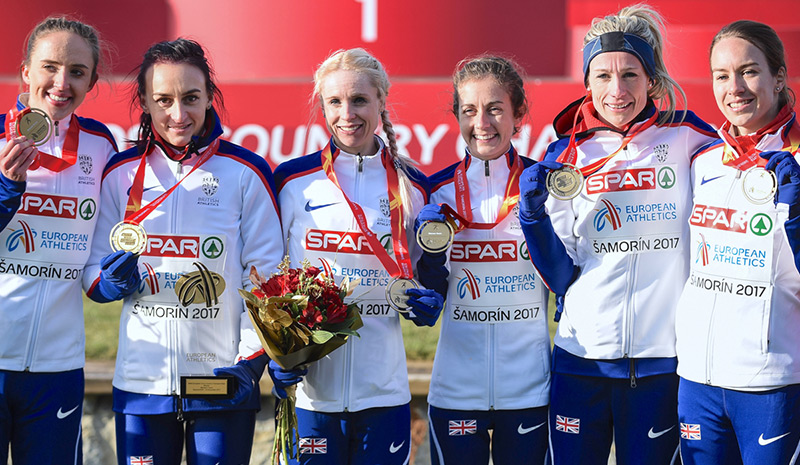 It is clear from talking to the bright young talent that she is having the time of her life in San Francisco, a fact that must be contributing to her ever-improving performances on both track and country.

She explains what life at the Californian state university is like for an elite athlete: “I truly am loving my time at USF,” she confirms. “An average day starts with a team training session in the morning. My teammates are a wonderful group of girls, so this is a part of my day I really look forward to. We push each other to be better during training, but also have a lot of fun together. I have also developed a really good relationship with my coaches (Helen Lehman-Winters and Benji Wetli) over the past few years and I have a lot of trust in the training plan they set out for me.”

The former triathlete has also been careful to keep on top of niggles on a regular basis, allowing for a consistent upwards curve, and, alongside almost daily cross-training sessions, she is keeping the balance between running, studying and sight-seeing at an optimum.

The Development Economics student has one more track season left at USF before graduating next summer, and, although she doesn’t have a plan for what happens next, she adds ‘as long as it involves running in some shape or form, I’ll be happy!’

Taylor has one more NCAA track season left before then and doesn’t plan on wasting any time in preparation for what could be her biggest year yet.

“I will head back to the US in January and begin preparing for my final NCAA track season,” she explains. “I might run a few indoor races first, and then I’ll turn my attention to the 10,000m for the outdoor track season. I’d love to compete at the European championships, but I’m not yet sure whether the qualification procedure will fit in with my NCAA commitments.

“Longer term, making an Olympic team would be a dream come true, so I’ll keep working towards that. But I enjoy training and racing so much that I don’t spend too much time thinking that far into the future – I prefer to just enjoy each day and opportunity as it comes, and aim to give each one my best effort.”