Bouncing back from a debut DNF to running a 2:19 marathon 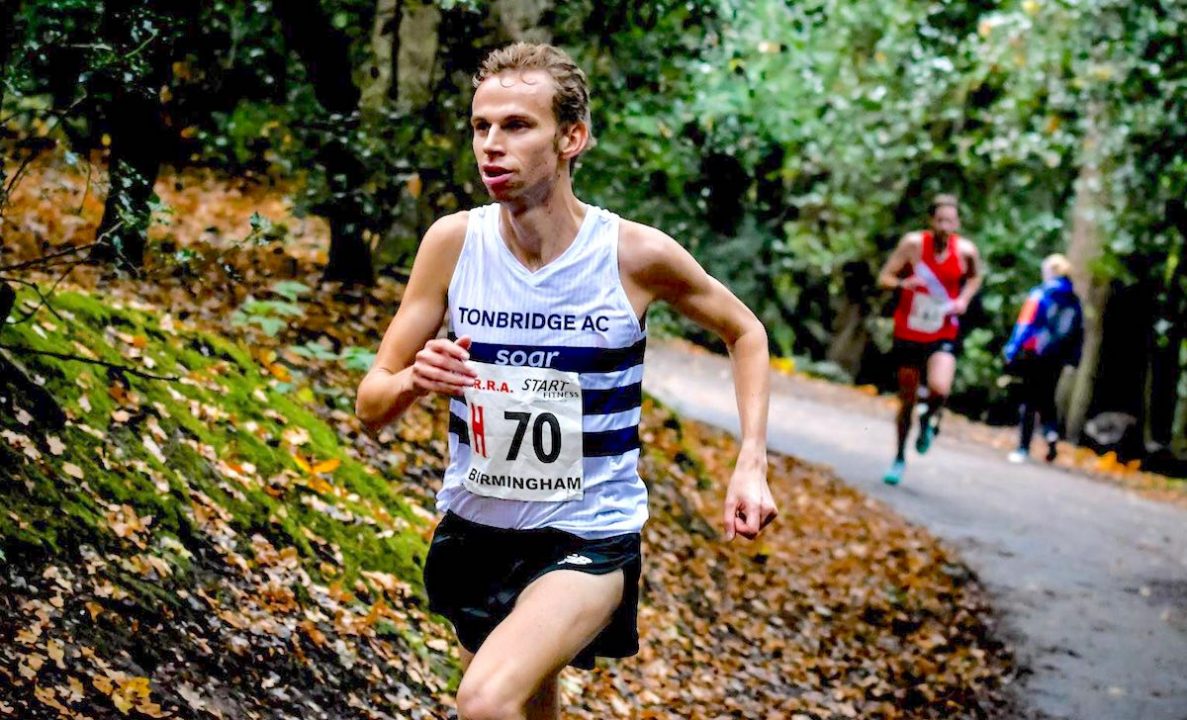 Henry Pearce returned to conquer the classic distance in style when he finished first for Team England in Toronto.

After being forced to pull out mid-race on his 26.2 mile debut at the London Marathon earlier this year, Tonbridge AC’s Henry Pearce bounced back to run a fantastic 2:19:23 at the Toronto Waterfront Marathon in October.

Pearce’s achievement is all the more notable for the fact he not only works full time alongside running over 100 miles a week – he also studies most evenings too!

The trainee accountant certainly packs as much as he possibly can into his life living in central London. While the 24 year-old is unsure of what’s next race-wise, he’s keen to strike a happy harmony with training and a city career.

“The key is whether I can balance running with other life commitments,” he tells Fast Running. “I’m going to think it through properly, but I’m leaning more towards giving it a proper shot and balancing work alongside it.”

The fact the relatively new kid on the elite running block is even able to consider other options is a sign of how far he’s come since being taken under coach Alan Storey’s wing in January.

His marathon breakthrough is a testament to Storey’s ability to get the best out of his undoubted endurance capabilities.

“With Alan’s experience and coaching philosophy, the training is a perfect fit for progressing my running career,” he says. “This is especially true of my move to the marathon distance.

“We communicate regularly by Whatsapp, email and on the phone, despite him living down in Bath.”

A year of back to back PBs

Storey helped the Tonbridge AC star run a debut 49:54 clocking – and victory – at the Bramley 10 in February, before going onto firmly establish himself amongst the best in the country in March.

Pearce sped to a huge six minute half marathon PB at the Big Half in London, posting a 65:49 result in the British Championship race.

Since then there’s been no stopping the tall Kentish athlete.

The month before Toronto he ran a 29:33 debut at the Cardiff 10k before going onto win the Ipswich half marathon just two weeks later in 66:02.

It was his trip to Canada with fellow Team England members James Westlake, Hayley Carruthers and Helen Davies that was to prove the making of Pearce, though.

How did he feel when he discovered he’d been selected for the race ‘on merit’, despite dropping out of London earlier in the year? “I felt incredibly privileged to be picked to run for England, as I was in essence selected off potential, so I’m so thankful and grateful to the selectors,” he enthuses.

“The DNF in London is still a mystery to me. It could have been the heat, hayfever, nerves of the occasion, or even something going slightly wrong in the build-up.

“I was way off target pace at halfway, overheating and heading for big trouble. That was when me and Alan decided it was best to step off the course. It was the right thing to do. I probably would have caused great harm to myself otherwise.

“It took a while to recover from in a mental sense though. I’d worked so hard and for so long at something for the race just to completely fall apart. I was questioning what I was doing for a while.

“Luckily, the selection came along, which provided plenty of motivation!”

Preparations were perfect for Toronto

That motivation clearly helped him run those late summer PBs, setting him up nicely for a timely confidence boosting lead up to Toronto.

Pearce says he knew he was in good shape, was recovering from training sessions well and hitting all the prescribed paces and times set by coach Storey.

He adds: “It was just a matter of executing all of that training on race day in order to record my first time down on paper.”

The fact he was to swap the searing heat of the London marathon for the bitterly cold Canadian autumn didn’t phase him either.

Pearce says the wind was more of a factor on race day “as the course is incredibly exposed on the front of Lake Ontario”.

He adds: “I tried to keep to my prescribed pace, but had to run alone from 11k onwards. That made the closing 8k of the race incredibly tough, as they were directly into the wind!

“I feared those last few miles of the race as it was heading into the unknown, but now that I’ve done it I know I can do it in the future.”

The British international cross country athlete is no stranger to running alone, as he does all his training solo.

He says it makes him better able to deal with the demands racing can throw at him.

“I’m not too bothered about training alone,” he asserts. “I feel it gets you mentally stronger for the marathon distance.

“I train on my own because it’s hard to fit in with others doing similar training around my full time hours.

“In the build up to Toronto I was sometimes having to do 1.5-2 hour sessions on my own at 6am!”

Those early morning and evening runs have continued post-Toronto, with studying taking up most evenings too.

“When I’m in full training there isn’t much time to do anything else! It’s very full on, but I like being busy,” he says. “In my downtime, I like meeting up with friends and watching and playing sports. When I’m older I hope to play a lot more golf!

“My biggest fear comes from not recovering and getting enough sleep. The training part strangely doesn’t seem that bad compared to the rest of the day.”

The rest of the day must be pretty challenging considering the effort Pearce puts into an average week’s training.

“However, it changes all the time. Generally, I have a down week every few weeks, and sessions will also be set on days where it fits in with work and other commitments.

“Alan always listens to how I’m feeling and how I’m recovering, adjusting the week accordingly. I don’t do any cross training unless an injury crops up. I also don’t do much strength and conditioning, but it’s something I’ll look to add into my training very soon.

“My favourite sessions are definitely the longer tempo type rep session work. Long runs of up to 2 hours 15 minutes at a good pace are what I really enjoy. That’s one of the reasons I stepped up to the marathon.

“Fuel-wise I eat a balanced diet, but also tend to treat myself quite a bit at times! I take a very relaxed approach to nutrition, although carb-loading in the lead up to a marathon is a thing for sure.”

The Loughborough University Management Science graduate is glad of his time studying Stateside, where he earned a Masters in Accounting at Tulsa.

“Both universities were great for my athletics at differing points in my life,” he reveals. “I stayed in the UK for my undergraduate degree because I wanted to compete at home with the aim of gaining international representation.

“The facilities at Loughborough are great. I was coached by George Gandy during my time there and my running came on well.

“I then had the choice to work full time or take up a scholarship in the US. The choice was a no brainer for me.

“The likes of Chris O’Hare, Marc Scott and Luke Traynor went to Tulsa. They were brought on greatly by the athletics programme, so Tulsa seemed a perfect fit for what I was looking for.

“University sport in the States is set up in a much more professional manner than in the UK. I feel incredibly privileged to have experienced it.

I would advise other athletes to do their research before heading out, though. Make sure you’ll be able to transition well into the new training programme.”

Pearce’s time in the US wasn’t all plain sailing, however.  As is traditional for foreign students looking for adventures abroad, he thought nothing of buying an old clapped out car for a road trip along with two other young bucks.

Sadly their planned journey from Tulsa down to New Orleans was cut short when the banger broke down in a small village in North Louisiana.

Refusing to be defeated, the trio hired another car to complete the trip, only to arrive in New Orleans at 11pm to discover they’d booked the hostel for the wrong weekend!

He adds with a laugh: “Luckily some athletes from the University of Tulane put us up for a few days!”

Tonbridge AC’s rise to the top

It could certainly be argued that that American adventure has been topped since he’s returned to British shores with his achievements in the Tonbridge AC vest.

Tonbridge have grown into one of the UK’s most successful clubs under the guidance of long term coach, Mark Hookway, who also forms part of the Trackside Podcast team.

Pearce is glowing in his praise for the club he’s been a member of since 2009.

“It’s great being part of such a strong athletics club,” he says. “I feel incredibly fortunate to have been introduced to the club by my maths teacher at school in Tonbridge.

“Although many of the older athletes are now dotted around the country and the world, people still make the trips to races.

“The club has been developed and brought together by an incredible amount of hard work from Mark. All of us athletes at Tonbridge AC realise the club would not be where it is today without him.”

Pearce is allowing himself to recover fully after his marathon efforts in Toronto before he considers his next racing venture.

However, he is in no doubt that he’s found his favourite competitive distance.

“Having had a taste of the marathon it definitely seems my preferred option in the longer term,” he reveals. “At the age of 24, I feel there is much more progression to be had at the distance. It’s where my strength and potential lies.”