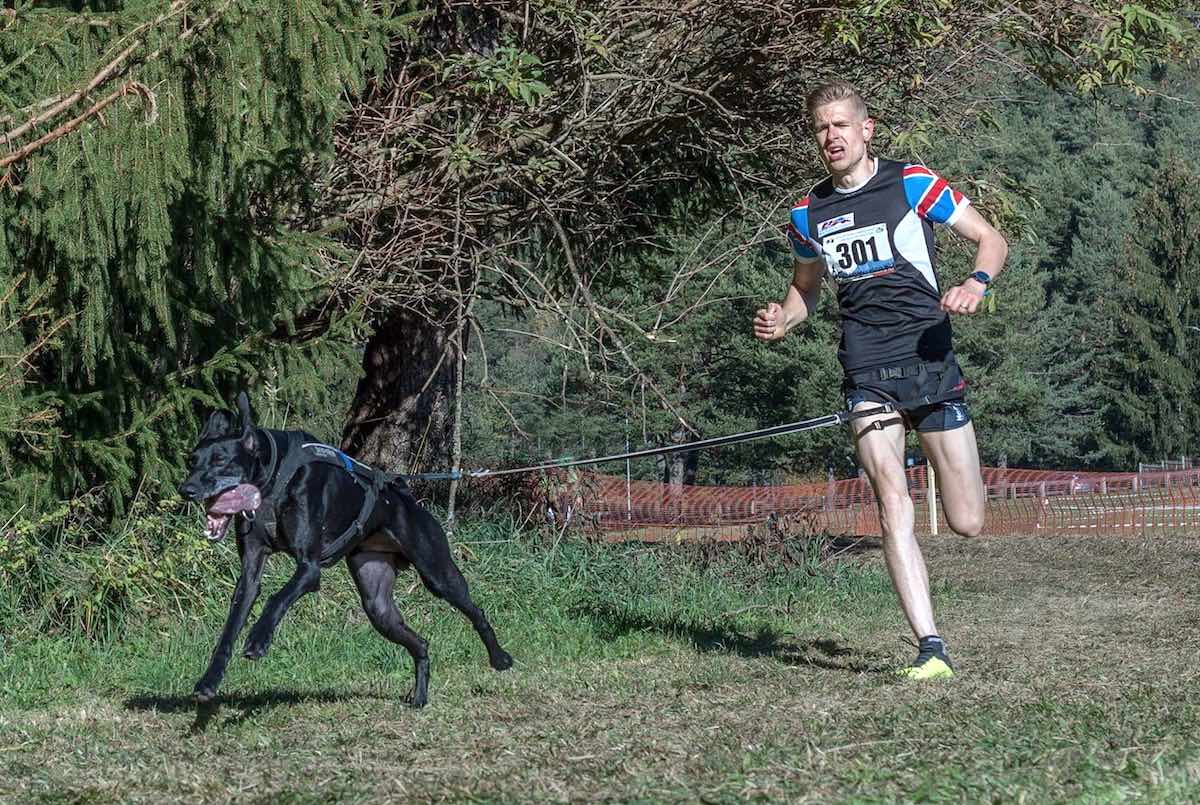 Ben Robinson was that man along with his dog Blake. Now, I hear the cries of the die-hard runners: “that’s cheating” or “who gives a crap about a man being dragged around by his dog”.

However, Robinson is a solid 5k runner in his own right, running under 15 minutes this year –
without Blake. The pairs 12:24 time is quicker than the 5000m World Record and that definitely constitutes fast running.

Before the pair head to the World CaniCross Championships this weekend in Poland, Fast Running wanted to find out more about this speed demon. Blake was busy sleeping, so his running partner kindly spoke instead.

“Blake is a purpose-bred cross for dog sport called a Greyster, and he’s been improving recently in every race,” says Robinson, who has a 14:59 5k personal best. “Just last week we covered a 4.2km cross country course at sub 12:30 5km pace on two consecutive days – so I’m having to get accustomed to the speed.”

That kind of pace is astounding and surely must bring its own pitfuls. “DOMS are a big issue when it comes down to getting your own quality work in.

It’s why I try to limit how much canicross I do with my dogs because they are so good at what they do,” he explains. “Last weekend the hamstrings & glutes took the hit as the course had some slippery downhill sections so there was a bit of ‘braking’ from me but this week on a faster/flatter route the calves suffered the most!

“I keep Canicross limited to save my own legs so we do a lot of his faster/interval quality work in harness using either the bike or scooter [with the dogs dragging a purpose-built scooter or bike from the harness]. I’m a big fan of free running the dogs as well so he’ll often accompany me on my own training runs! When you pull like Blake, even a walk is a hard training session.”

Could the assistance lead to individual improvements?

Although more and more of his competition is focused on canicross, Robinson still has to train for his own running and races separately. He broke 15 minutes for 5km for the first time this year at the Bristol Aztec West Fast 5k. Some of that must be down to the training with Blake and the other hounds at an ‘overspeed’ pace?

“I’m not sure of the effect it’s had physically but I would say the biggest effect has been the consistency it’s brought,” says Robinson. “The dogs are always ready to run, even if just accompanying me. They never let you down plus they’re a real nightmare to live with if they don’t get their run, so it gets me out the door.

“And I really enjoy the time with them, so I certainly feel I’m in better shape for it all” – this somewhat ties in with Irish marathon great John Treacy’s advice about challenging training partners! 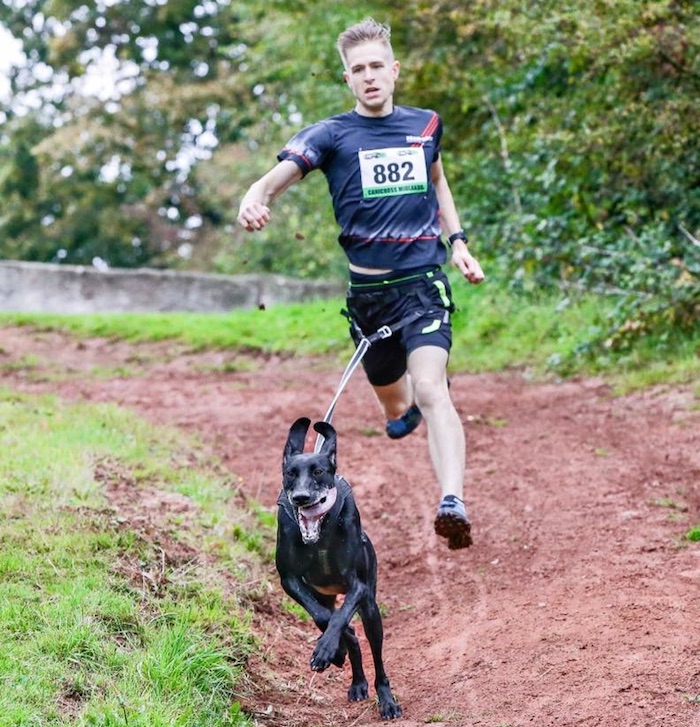 After clocking 12:24 for 5k, with the first mile in 3:37 can the pair go even quicker? “I certainly believe we can improve, Blake is still a young dog and I’m still learning in the sport. At this moment in time, right day/right course and conditions etc. I don’t think we’re far away from a 12:10 5km and ultimately I’ve got one eye on sub 12 minutes.

“I do have goals to try canicrossing successfully at longer distances but it has to be right for the dog both physically and mentally,” explains Robinson, who has similar concerns, that a coach would for a 5k runner about the impact of stepping up in distance. Maybe Dewi Griffiths could advise Blake?

“Blake is a special dog but it’s not a goal I have with him. In fact this week at the World Championships I am also bringing home a new pup bred in Germany – that I hope will help me to achieve great things across the longer distances.

She was bred out of a kennel of ‘team’ dogs running longer distances on snow with sleds. Though I have to be honest and say it’s an unknown for us all (including the breeder) exactly what we can do at this stage.But we’re both very excited to try”.

For those that do get annoyed about people running with their dogs in races, Robinson says: “it comes up occasionally, but I guess I just try to explain that it really is two different sports. I view my accomplishments in both athletics and canicross as completely separate. I’ve never been aware of someone trying to claim an assisted time as their own.”

“I’ve also seen a lot of respect from the canicross community when it comes to communication/following of stipulated rules with events that do allow participation. We’for very grateful of the opportunities we do get and it opens up running (in whatever capacity) to a wider audience which has to be a good thing?”

Similar to this is the L.D.W.A. in the UK allowing runners into their walking events. It does put an extra strain on the organisers but is always appreciated by the runners allowed to take part.

So if anyone is interested in trying out CaniCross, Robinson advises: “I’d probably say to get yourself to a local club or group. Lots are setting up all over the country now. Surround yourself with like minded people in an environment where they can share experience.

“Much like athletics, running in a group can be great for performance and also be sure to get expert advice on kit as it’s important to get the best out of both human and dog but more so for injury prevention as well.”

The forces impacted on both dog and human require the correct set up when it comes to harness – and there are actually regulations involved to protect the hounds.

So after he started CaniCross with his Weimaraner, Bolt, in July 2014 he’s gone from beginner to competing at the World Champs and possibly bringing home some medals. For those worried, there will be anti-doping at the World Champs and Blake was tested at an event recently in Italy. There was precedent of an ADRV for tramadol at the Iditarod sled race just this year, huskies (or most likely the musher) quite a fan of cycling.

Robinson hopes it goes a bit better than the start of the European Championships 2015 in Scotland: “Day 2 was a mass start in seeded waves so the fastest seven guys in Europe were starting together, it was an absolutely crazy startline of dogs up to over 40kg raring to go.

“The conditions were horrific and the ground had been churned up by the bikes and scooters who had been racing all morning. Less than 400m into the race was a long cambered descent. At one point I honestly think at least four of us were sliding down on our backside with the dogs still pulling hard racing one another! I did get up, although it wasn’t the last time I stacked it during that run.”

All the best in Poland to the pair this weekend. My partner and I actually tried canicross with our dog Rosa, but she went in the opposite direction at the start.