Age is no barrier to success for Alastair Watson 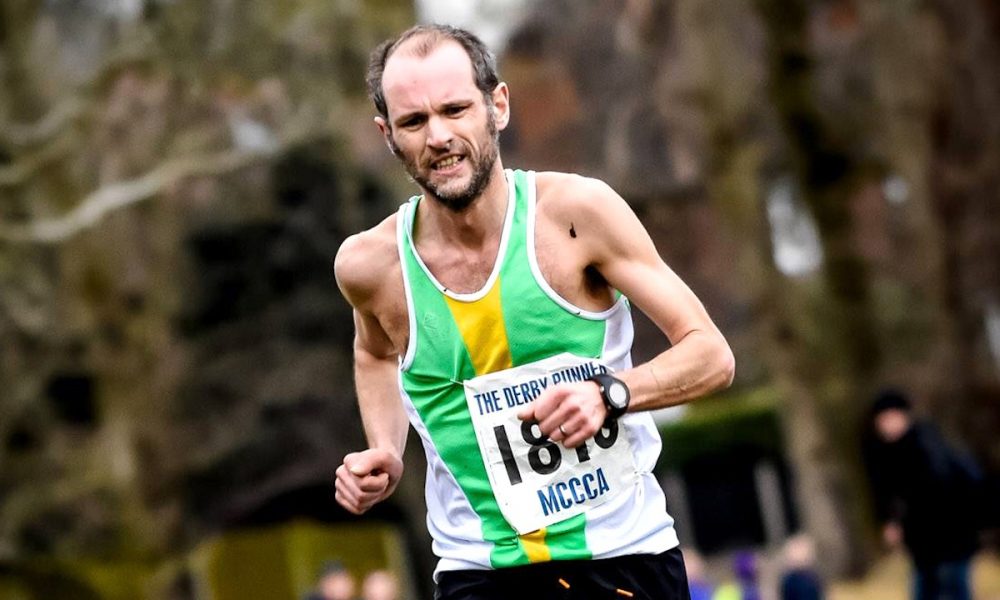 At 40 years of age, the Notts AC runner is thriving as a veteran and more than keeping up with the speedy youngsters.

“My advice is to embrace the age groups.” That’s the counsel offered by Alastair Watson whose 29:56 PB at the Leeds Abbey Dash 10k took him to the top of the V40 rankings for 2017 and fifth on the all-time standings.

He followed that with a 5k PB of 14:28 at the recent Mid-Cheshire 5k and English 5k championships, which places him second on the all-time V40 road rankings.

Watson was a relative latecomer to elite domestic athletics, competing in his first race – a marathon – at the age of 29.

However, the 40 year-old acknowledges that this may have given him an advantage, as he hasn’t endured decades of ‘wear and tear’, and is still relatively fresh to endurance running.

Here we talk to the Nottingham veteran about his continued improvements as he makes further inroads into the masters record books, how he manages to stave off injuries, and the importance of his running club to his standing as one of the country’s most consistent top performers on the road, track and cross country.

Fast Running: Congratulations on your recent 5k PB of 14:28. How do you feel about masters running now you’ve joined the V40 ranks?

Alastair Watson: I think vets running has a place, (although I did ignore the V35 group), and I appreciate the V40 group so much. Masters athletics allows athletes to continue to push themselves and set new and realistic goals.

I think it also gives people who perhaps didn’t do senior racing or didn’t reach the highest levels at younger age groups something to aim for, as there are a raft of veteran championships and times to go for. The age-graded rankings are also a great motivator in that respect.

FR: How do you manage to race so consistently well at a high level and remain injury-free, particularly as you get older?

AW: Other than 10 weeks out in December 2016 with patella tendonitis, I have been lucky with no injuries during the 11 years I’ve been competing. The consistency in training has certainly helped, with many weeks over 70 miles.

For nine years it was pure luck to remain injury free, I did no conditioning, just a few miles warm up and down either side of races and sessions. The knee injury was a huge wake-up call though.

The physio said, in no uncertain terms, I needed to do more exercises as part of my running set up, or the injury would resurface. Now I do lots of quad and hamstring stretches, foam rolling, squats and lunges two or three times a week. In the last two years, I’ve found I stiffen up more quickly after heavy exertions, so I don’t think there are any shortcuts as you get older.

I spoke to Alan Smith, (his son runs for Notts), and Tim Hartley, our club veteran legend, about this subject recently, and they both agreed you can get some good pace and times into the mid-40s. Looking at the vets, those who started running late – I started at 29 years-old – do seem to be at an advantage, as they haven’t necessarily had the wear and tear.

There’s a Bingley guy from the 1990s called Keith Anderson in many of the V40 all-time lists, who started running at 30 years old to lose weight and stop smoking. His journey took him all the way to the Commonwealth Games marathon. I read the recent Fast Running article on super vet Steve Way, and he articulates his training and focus so well, so there’s plenty of inspiration around.

FR: Your biggest improvements have come in the last couple of years – what has changed in your training, your mental outlook, and your attitude to racing to allow you to PB over 10k and go sub-30 for the first time aged 40?

AW: I was peppering PBs over a range of distances for a number of years, running several 30:00 – 30:10 times, but 2016 stands out due to the jump in my 10k track PB. Nothing changed significantly to bring that about, I think it was just the years of consistent training paying dividends.

However, I think the extra belief and confidence gained from a great cross season and the England call-up helped, along with the desire to put my gutting ‘sub-30 9.9k’ time at the short Trafford 10k behind me.

This meant I toed the line at Highgate absolutely in the zone. That was my first sub-30 and I destroyed it (Ali ran 29:36 to knock a massive 42 seconds off his previous best). My other road PBs fell into line that year too, and, although I had to wait until the Leeds Abbey Dash in November for the sub-30 road 10k, knowing I’d gone below on the track already did help.

Leeds is a great race. I’d got into shape using the Autumn 6 stage relays in October as another good gauge, so I knew I had a great chance.

I didn’t worry about being 40, it’s just a number, although I had noticed only three vet guys had broken 30 minutes in the last 10 years. The killer touch this time was far better pace judgment (having stupidly led the race out in 2014) than previous years, along with good fitness. I think experience finally did help there. FR: Are you coached, or do you plan your own training?

AW: I make as many Tuesday sessions at Notts AC as I can, where the training is led by Trev Muxlow. I don’t have a bespoke plan laid out, but always try to join in the group sessions. Trev acts as a sounding board and a guide. For example, after a rather poor Midland cross run in 2014 when I’d thought I was in with a shout of winning, he managed to build my confidence back up.

It worked, as I bounced back a few weeks later to my then best national performance (Watson placed 25th in the English national cross that year, but has since risen to a best position of 11th in 2016).

All my other runs are on my own – nothing beats running in the great outdoors with just yourself and your thoughts. I seem to have found a structure that works for me, and, to be honest, I’m reluctant to change it while the results come.

FR: Do you work, and if so how do you fit running around it?

AW: I work as a business analyst at Nottingham University hospitals. When not doing the job I get paid to do I am often at my desk eating obscene amounts of food – all fuel for the running engine.

Being office-based with settled hours and a close set up to home has meant run commuting is ideal to allow me to fulfil my training without impinging on family life.

I have two daughters aged three and seven, so once I’m home I can spend time with them. I get great support from my wife Becks, as I may not fit as much training in at the weekends. However, I do get passes out to do most of the races I wish to compete in. A happy compromise.

FR: Tell us about your club, Notts AC, who you’ve been with since 2012, the impact Notts has had on your athletics career, and Hermitage Harriers before then too.

AW: I joined Notts for a new challenge. I had already worked and lived there for a year so it made sense, and the team was challenging nationally for most honours.

I train every week with them and the club has been good to me, providing top end club race opportunities, coaching and a good team camaraderie.

I can’t underestimate how much it has helped push me on. I’m competitive, so I always want to be the quickest club man at Sutton Park for the relays, or the first guy back at the national cross. It’s happened a few times, of which I am proud.

I have also been fortunate to win several national medals, with gold at Parliament Hill in the 2015 national cross being the major highlight. We went in super confident, all our guys fit and committed, and we delivered at the home of cross country.

Hermitage Harriers will always mean a lot to me too, and it’s always good to catch up with old teammates at the relays and local events.

It was the first club I joined after running unattached at the Robin Hood Marathon in 2007 (where Watson ran 3:05:46 on his debut).

It provided racing opportunities in the Leicester Road running league, and had a great team spirit – it’s a ‘drinking club with a running problem’ as someone sold it to me on my induction. I had a few mad races with the club, racing horses and trains in Wales, all off silly low mileage.

The club’s strength in depth and profile has greatly improved in spite of me leaving, and they’re regularly seen at the national relays, something I couldn’t achieve with them. Ultimately it made me believe that I could be quite good at this running malarkey, if I upped my game.

FR: What races are you focussing on for the rest of the year?

It really is one of the best races for talent and support in the country, and I’ve been lucky enough to PB twice there in the past.

Beyond that, I’ll be looking for fast 5000m races, such as the BMC at Loughborough, where I need 14:32 to get on the all-time veteran ranking lists (which currently only list the top 13 V40 athletes).

I have also cast half an eye on the World Masters 10k, or the 5000m championships in Malaga in September. Kojo Kyereme (Shaftesbury Barnet V40) is an inspiration – I’m running similar times to him at the equivalent age – and he won a Masters gold!

Watson has run consistently under 70 minutes for the half marathon over the last five years.

He posted his 5k PB of 14:28 at last week’s Mid-Cheshire 5k and English 5k championships (April 26th), placing him second on the V40 all-time rankings.

The top veteran broke the 30-minute barrier for 6.2 miles on the track in 2016 when he ran 29:26 to place 11th in the elite race at the Highgate Harriers Night of the 10,000m PBs – which also serves as the England Athletics and UK Championships.

British marathon crown is only the start for Lily Partridge
The magic 40s: parkrun to international runner